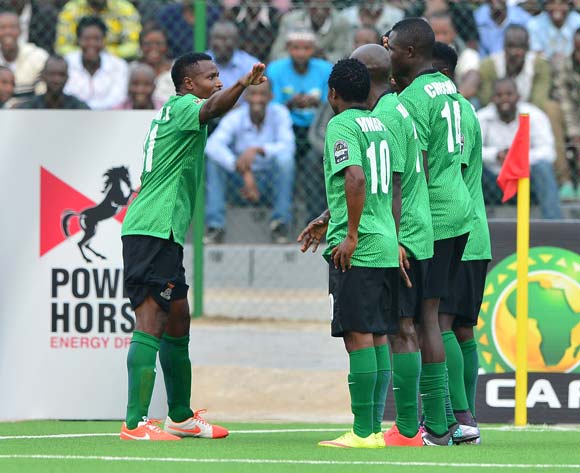 Christopher Katongo of Zambia (l) salutes teammates in celebration after Isaac Chansa (far right) scores during the 2016 CHAN football match between Zimbabwe and Zambia at the Rubavu Stadium in Rubavu, Rwanda on 19 January 2016 ©Gavin Barker/BackpagePix 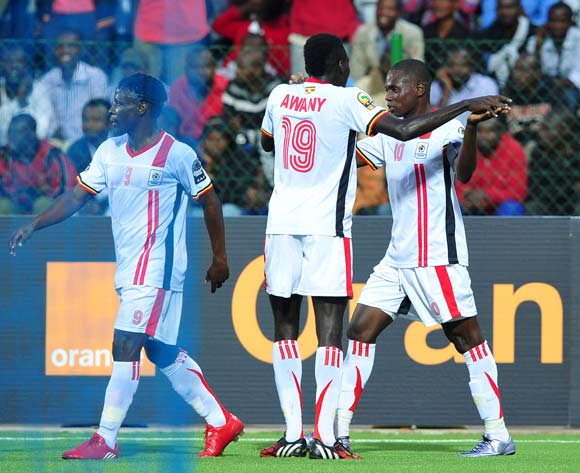 Timothy Dennis Awany of Uganda celebrates with goalscorer Miya Faruku of Uganda during the 2016 CHAN football match between Mali and Uganda at the Rubavu Stadium in Rubavu, Rwanda on 19 January 2016 ©Ryan Wilkisky/BackpagePix

A first half header by skipper Chris Katongo was enough to hand the 2012 CAF Africa Cup of Nations champions the win and a ticket to the last eight.

The first 10 minutes of the clash saw Uganda kept busy with Chipolopolo aiming to bag an early goal.

However, Awany Dennis of Uganda also showed his intentions to the Zambians a few minutes in down the right flank delivering for midfielder Erisa Ssekisambu, but his shot went wide.

The match was lively towards the 20thminute with both sides knocking the ball around. Zambia thought they scored when Katongo chipped the oncoming Mathias Kigonya only for defender Juluko Kassaga to clear the ball on the line.

Five minutes later, George Lwandamina’s side dominated the proceedings but Uganda were strong in defence.

In the 35th minute, Joseph Ochaya struck a fantastic set piece heading for the top corner, but keeper Jacob Banda produced a fine save.

After 42 minutes into the contest, Katongo scored with a fine header from a free-kick down the left flank - the veteran out jumped the Ugandan defence to beat goalkeeper Kigonya.

The Cranes of Uganda pushed to get an equaliser and Banda was the busiest of the two keepers as he was forced to come out and made some crucial blocks.

In the 60th minute, Uganda enjoyed ball possession but struggled to penetrate the Chipolopolo defence.

With 15 minutes to go, Isaac Chansa missed a great opportunity to make it two when he failed to connect with the ball.

In the 80th minute, Clatous Chama received a sweet pass from the midfield and tried to beat the keeper, but he took too many touches which saw him lose the ball.

In the last 10 minutes, the Zambians managed to retain the ball in the Ugandan territory as they walked away as victors.

Uganda will be eyeing their first 2016 African Championship Nations (CHAN) Group D victory when they host Zambia at the Umuganda Stadium in Gisenyi, Rwanda on Saturday.

The Cranes played to an entertaining 2-2 stalemate with Mali in their opening Group D match at the Umuganda Stadium on Tuesday evening.

Farouk Miya and Joseph Ochaya hit the back of the net for the East African nation against the Eagles of Mali on the night.

Bad news for the Cranes ahead of their clash with Zambia is that captain Miya and first choice goalkeeper Ismail Watenga (ruled of 2016 CHAN) will both miss the game due to injuries.

However, Uganda head Milutin Sredojević has urged his charges to show character in the absence of their key players.

"It is a pain to miss two of your best players, but I challenge the remaining players to rise to the occasion and prove the true character of playing at such a competitive tournament," Sredojević said.

Meanwhile, Zambia are gunning for their second consecutive 2016 CHAN Group D victory against Uganda on Saturday.

Chipolopolo narrowly edged out Zimbabwe 1-0 in their Group D opener at the Umuganda Stadium on Tuesday afternoon.

Isaac Chansa's solitary strike proved to be the difference between Chipolopolo and the Warriors of Zimbabwe on the day.

Zambia head coach George Lwandamina hopes that his troops deliver an even better performance against Cranes.

“The first game now belongs to history. It is in the archives. Our sessions building up to the game against Uganda will see us work to get over those errors and better what was good. Uganda is now our target and our thoughts should be on nothing but Uganda,” Lwandamina said.