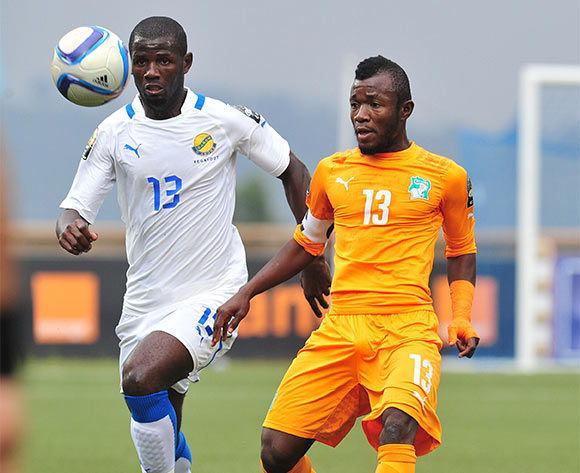 Yao Serge Nguessan of Ivory Coast challenged by Franck Perrin Obambou of Gabon during the 2016 CHAN Rwanda, match between Ivory Coast and Gabon at the Huye Stadium in Butare, Rwanda on 24 January 2016 ©Muzi Ntombela/BackpagePix 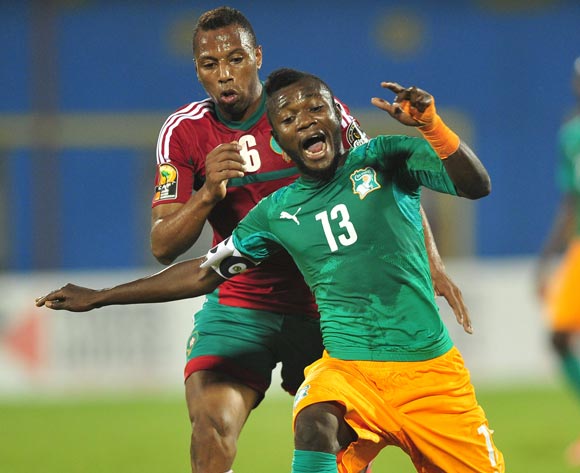 Ivory Coast joined tournament hosts Rwanda in advancing from Group A into the quarterfinals of the 2016 African Nations Championship after they defeated Gabon 4-1 in Butare on Sunday afternoon.

The Elephants finish the group stage on six points, level with Rwanda (who were beaten by Morocco in the other Group A match) but Amavubi claim top spot thanks to a superior head-to-head record after they beat the West Africans 1-0 in the tournament’s opening game.

Ivory Coast settled the quicker of the two teams and it was no surprise to see them take the lead in the 19th minute, with Essis Aka firing home a low shot from outside the penalty area to make it 1-0.

Gabon responded by withdrawing youngster Mario Mandrault, who struggled to get the better of the Elephants’ defenders, and replacing him with Allen Nono.

The Panthers made a second tactical change at the start of the second half, sending on Lionel Yackouya to replace Aaron Boupendza, and they soon looked a much more dangerous prospect.

In the 51st minute Gabon equalised through Franck Obambou, who got on the end of a corner kick from Knox Younga and found the back of the net with a powerful downward header.

Yet parity lasted less than a quarter hour, with Ivory Coast reclaiming the lead on 65 minutes. Djedje Guiza picked up a loose ball in the penalty area and beat Yves Moto with a powerful shot which burst through the goalkeeper’s hands.

The Elephants added to their advantage in the 77th and 84th minutes as Gabon’s spirits dropped, with substitutes Koffi Boua and Ble Treika both scoring well-executed goals to add some gloss to the score line.

Côte d’Ivoire will face Gabon in Butare on Sunday, in their 2016 African Nations Championship’s final Group A outing.

The Elephants are lying second in the table on 3 points, after bouncing back from a 1-0 defeat to tournament’s hosts Rwanda in their campaign opener with a 1-0 victory over Morocco in their second encounter.

And a draw with the Panthers will prove enough to see the West Africans book their place in the knockout stage of the continental competition.

“We are getting ready to face Gabon. We are feeling good and the atmosphere in the team is great,” Côte d’Ivoire skipper Nguessan Yao Serge said.

“Group A is tough. We defeated Morocco, but we also lost against Rwanda. We had to face great players.

“It is now up to us to do what it takes to qualify for the next round. We need to remain focused to beat Gabon in our final match.”

Elephants head coach Michel Dussuyer will however have to cope in the absence of defender Koffi Marcellin due to an accumulation of yellow cards.

Meanwhile, the Panthers have no other choice but to earn all three points to stand any chance of progressing to the quarterfinals, after a goalless draw against Morocco followed by a 2-1 loss to Rwanda.

The match will kick off at Huye Stadium in Butare at 16h00 CAT on Sunday, with Rwanda, who are already through, taking on Morocco in Kigali in the other Group A fixture at the same time.