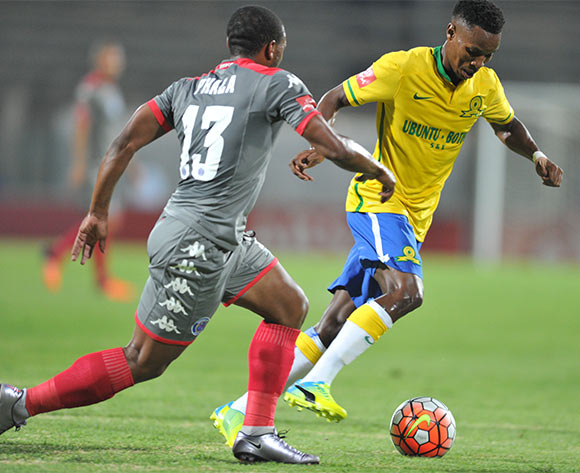 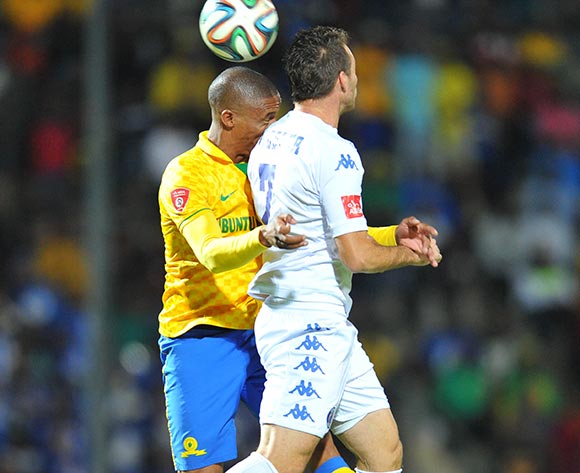 Welcome to the live play-by-play for the ABSA Premiership 2015/16 match between Mamelodi Sundowns and SuperSport Utd at Lucas Moripe Stadium.

Good evening and welcome to the live Play by Play for the Tshwane Derby clash between Mamelodi Sundowns and SuperSport United from the Lucas Moripe Stadium in Atteridgeville.
Pitso Mosimane sticks to the tried and tested players that has seen the club accumulate an unbeaten run of 14 games in all competitions.
Mark Mayambela starts for a SuperSport United side who are desperate to bounce back from a 4-1 defeat to Polokwane City.
Historically, this game produces goals, lets hope that continues this evening! Only two draws in the last 11 fixtures between the two sides.
1' The match is underway!
2' Sundowns in their traditional 'Brazilians' strip, attacking the goal to the left in the first-half. SuperSport in grey and red playing from left to right.
2' Chance! Brockie plays in Wome who has a sight of goal, the Togo international though rushes his shot - sending his chip effort wide of goal.
6' Free-kick for Sundowns in a promising area, Mkhabela fouling Castro...Good early flow to the game..
7' Looked promising...but its a very poor effort by Kekana. Goal-kick.
9' Free-kick SuperSport United, quickly taken by Phala...a poor decision and easily dealt with by 'Downs.
14' CHANCE AND SAVE! Free-kick for Sundowns, Billiat tries to catch out Williams, but the goalkeeper is alert to the danger and tips the Zimbabweans dipping effort over the crossbar.
16' Mayambela blazes Nthethe, but Zungu gets back well to bail his teammate out of jail. The resulting corner-kick is well gathered by Onyango.
18' SAVE! Dolly forces Williams into a good save before Billiat flashes wide from the rebound.
23' Sundowns bossing possession at the moment, they look a team on a high.
24' Kekana lines one up from 30 yards...makes sweet connection, but Brockie stands tall in the wall.
26' Daniels to the rescue just as Langerman is about to unleash from close range, great play in and around the area by the hosts.
30' Half-hour played in Atteridgeville...After an initial flurry, no goal action in the last few minutes.
32' Thuso Phala (SuperSport Utd) is cautioned.

35' Rain starting to come down in Atteridgeville...shouldn't bother either side really.
37' Back to back corner-kicks for SuperSport United, big men in the area, but Castro clears at the near post.
38' Another corner for SuperSport, this time Zungu hacks clear. Pressure from the visitors.
42' Blooper by Williams...the SuperSport goalkeeper looks to have Dolly's deflected shot under control , but a laps of concentration sees the ball touch his foot and go out for a corner-kick.
43' Hlompho Kekana (Mamelodi Sundowns) scores!

44' Goal from the resulting corner-kick! Kekana loses his marker to head in Dolly's cross 1-0. Igesund will be livid.
45 + 2' The referee brings the first half to an end.

46' The second half is underway
47' Leonardo Castro (Mamelodi Sundowns) scores!

48' Horror show by SuperSport, Furman robbed by the combination of Dolly and Billiat, the latter setting up Castro for an easy tap in. 2-0 and this could get ugly.
51' Mark Mayambela (SuperSport Utd) is cautioned.

58' CHANCE AFTER CHANCE! Great save by Williams to deny Billiat at the near post before Castro see's his header attempt bounce inches wide. Game opening up.
60' Great save by Williams again to deny Billiat! Sundowns all over SuperSport at the moment.
65' Sundowns really bossing the show at the moment, SuperSport chasing shadows! Pitso though will be demanding more goals...
66' Brockie with a shot from an acute angle, but its an easy save for Onyango at his near post.
72' SuperSport Utd: David Mathebula replaces Enocent Mkhabela

Welcome to the live play-by-play for the ABSA Premiership 2015/16 match between Mamelodi Sundowns and SuperSport Utd at Lucas Moripe Stadium.

Mamelodi Sundowns returned top of the Absa Premiership standings with a 2-0 win over Tshwane rivals SuperSport United at the Lucas Moripe Stadium on Saturday.

It was another evening to forget for Gordon Igesund's troops who were punished by an in-form Sundowns team who extend their unbeaten run in all competitions to 15 games.

Hlompho Kekana and Leonardo Castro scored the goals for the Brazilians.

SuperSport started well and conjured the first chance through Dove Wome who shot wide on two minutes after being put through on goal by Jeremy Brockie.

Sundowns first shot on target came on 14 minutes, Khama Billiat forcing Rownen Williams into a good save from a dipping free-kick.

Billiat and Keagan Dolly were a constant menace and the latter played an integral part in the opener.

The former Ajax Cape Town winger took the shot which Ronwen Williams parried for a corner-kick and then supplied the resulting cross which Kekana headed home two minutes before the interval.

Things went from bad to worse for Matsatsantsa two minutes following the break, another clumsy error pounced on by the Brazilians. The duo of Billiat and Dolly again involved, this time the Zimbabwean supplying the assist for Castro to tap in.

Williams went some way in making up for his mistake, denying Billiat on several occasions while Castro was unlucky to see his header attempt graze the outside of the post.

SuperSport showed some fighting spirit late on, but Sundowns were deserved winners on the night.

‘Downs ready for derby against United

Mamelodi Sundowns will look to consolidate their place at the top of the Absa Premiership when they host SuperSport United at Lucas Moripe Stadium on 23 January 2016, kick-off at 20h15.

Sundowns extended their unbeaten run in the league to 10 matches with a 2-1 home win over University of Pretoria on January 16.

The Tshwane side has claimed 19 points from seven home matches this season.

The Brazilians are placed first on the Absa Premiership log with 30 points from 14 matches.

SuperSport suffered their first defeat since October when they were beaten 4-1 at Polokwane City on January 16.

The Tshwane side has claimed 11 points from seven away matches this season.

Matsatsantsa are placed 10th on the Absa Premiership log with 17 points from 14 matches.

In head-to-head stats, Sundowns and SuperSport have met in 48 league matches since 1990.

The Brazilians have claimed 23 wins compared to 14 for Matsatsantsa, while 11 matches have been drawn.

Sundowns have won 10 of their 24 home matches against SuperSport, suffering nine defeats in the process.

Last season the Brazilians claimed a league ‘double’ over United by winning 3-1 at home and 2-1 away.

The teams have played to just two draws in their last 11 league matches against each other.