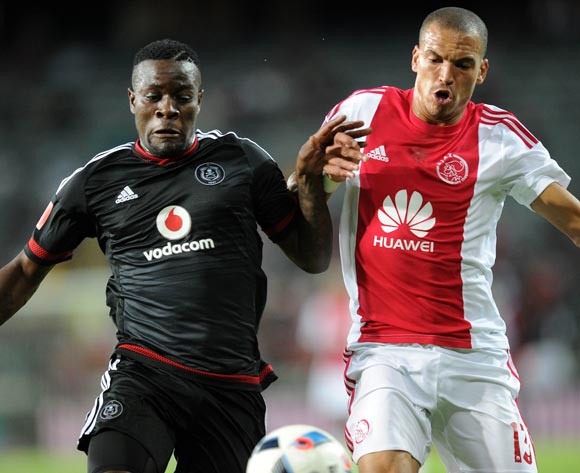 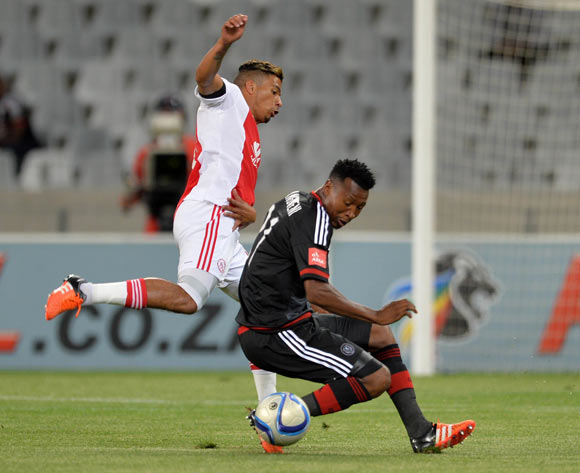 Welcome to the live play-by-play for the ABSA Premiership 2015/16 match between Orlando Pirates and Ajax Cape Town at Orlando Stadium.

1' The match is underway!
3' Myeni with the first shot in anger, but it's easily claimed by Jaakkola.
8' A worry here for Ajax, with Paulse seeming to have broken - or at least badly injured - his wrist in an unfortunate fall.
14' A Pirates corner kick finds the head of Gabuza, who heads wide of the near post.

17' Gabuza gets in behind the Ajax defence but he's denied from a tight angle by Jaakkola.
20' Rivaldo Coetzee (Ajax Cape Town) scores an own goal.

21' A nightmare moment for Jaakkola, who allows Coetzee's easy back-pass to slip under his foot and roll over the line for an own goal!
23' Almost 2-0 to Bucs, with Rakhale touching Matlaba's cross just wide of the target!
31' Orlando Pirates: Mpho Makola replaces Thabo Qalinge

32' Qalinge has made way after twisting his knee in a challenge. Both teams have been forced into an early change due to injury.
36' Just under 10 minutes to half time, Pirates have been the better team and deserve their 1-0 lead.
40' Makola with a great chance to double the lead but he fluffs his shot with only Jaakkola to beat!
44' Jaakkola makes a great double, first keeping out a deflected shot from Ntshumayelo before somehow denying Nyauza on the rebound!
45 + 3' The referee brings the first half to an end.

46' The second half is underway
47' Sifiso Myeni (Orlando Pirates) scores!

48' Brilliant play from Gabuza to block a clearance, sprint down the left, beat a defender and set up Myeni for a simple finish!
57' Ajax have had a couple of corner kicks in the last few minutes, but they haven't been able to threaten the home side's goal posts just yet.
60' Thamsanqa Gabuza (Orlando Pirates) is cautioned.

66' Gyimah with a poor piece of defending in his own box and Nxumalo takes full advantage to bring the visitors back into the game.
73' Myeni almost sets up Gabuza with a scoring chance, but his cushioned header is just too strong for the striker.
77' Brighton Mhlongo (Orlando Pirates) is cautioned.

78' Mobara's header on target from a corner kick is saved by Mhlongo.

88' So close to an equaliser for Ajax, with Nxumalo heading against the crossbar!

90' There will be four minutes of added time.
90 + 5' The referee blows the whistle for Full Time.

Welcome to the live play-by-play for the ABSA Premiership 2015/16 match between Orlando Pirates and Ajax Cape Town at Orlando Stadium.

Orlando Pirates eased the pressure on coach Eric Tinkler with a narrow 2-1 win over Ajax Cape Town in an Absa Premiership clash at Orlando Stadium on Wednesday night.

The Buccaneers claimed the victory thanks to an unfortunate own goal from Rivaldo Coetzee and a strike from Sifiso Myeni, while the Urban Warriors netted through Prince Nxumalo and threatened to recover from a two-goal deficit.

Ajax had a nightmare start to the game, first losing key striker Nathan Paulse to what looked like a broken right wrist after an awkward fall, before Rivaldo Coetzee’s back-pass to Anssi Jaakkola slipped under the goalkeeper’s foot and went over the line for a comical own goal in the 20th minute.

Shortly thereafter Bucs almost doubled their advantage, with Thabo Rakhale touching Thabo Matlaba’s cross just wide of the target, and the hosts then also suffered an injury blow as Thabo Qalinge was withdrawn due to a knock to his hip and replaced by Mpho Makola.

The Pirates substitute had a great chance to score in the 40th minute, but he fluffed his attempted shot when faced with only Jaakkola to beat and then slipped to the floor in a half-hearted attempt to win a penalty which was rightly ignored by the referee.

On 44 minutes Jaakkola made up for his earlier error with a superb double save. He first did well to shift his weight and block a deflected shot from Thandani Ntshumayelo, before brilliantly and bravely denying Ntsikelelo Nyauza from the resulting loose ball.

Pirates finally got the second goal they had been threatening when Sifiso Myeni scored early in second half. The goal was all down to the brilliance of Thamsanqa Gabuza, who charged down a clearance and beat a defender down the left before unselfishly teeing up his teammate to score.

Ajax made a double change after the hour mark – which included the long-awaited return of Tashriq Morris from injury – and the uplift in their tempo paid almost immediate dividends. On 65 minutes Edwin Gyimah was guilty of a poor piece of defending in his own penalty area and Prince Nxumalo took full advantage by winning the ball and beating Brighton Mhlongo with a cool finish to make it 2-1.

The Cape side dominated the last quarter of the match and almost claimed an 88th minute equaliser when Nxumalo got on the end of a corner kick and powered a header against the crossbar, leaving Pirates to hang on for a nervy victory.

Orlando Pirates will look for a boost in their Absa Premiership campaign when they host Ajax Cape Town at Orlando Stadium on 3 February 2016, kick-off at 19h30.

Pirates have won just one of their last six league matches and played to a 1-1 draw at home to Kaizer Chiefs on January 30.

The Soweto side has claimed nine points from seven home matches this season.

The Buccaneers are placed 13th on the Absa Premiership log with 17 points from 15 matches.

Ajax claimed a second win from their last three league matches when they defeated Golden Arrows 1-0 at home on January 29.

The Cape Town side has claimed four points from six away matches this season.

The Urban Warriors are placed 11th on the Absa Premiership log with 19 points from 15 matches.

The Buccaneers have claimed 18 wins compared to six for the Urban Warriors, while nine matches have been drawn.

Pirates have won 12 of their 16 home league matches against Ajax, suffering two defeats in the process.

Earlier this season goals from Erasmus and Majoro took Bucs to a 2-1 win over the Urban Warriors in Cape Town.