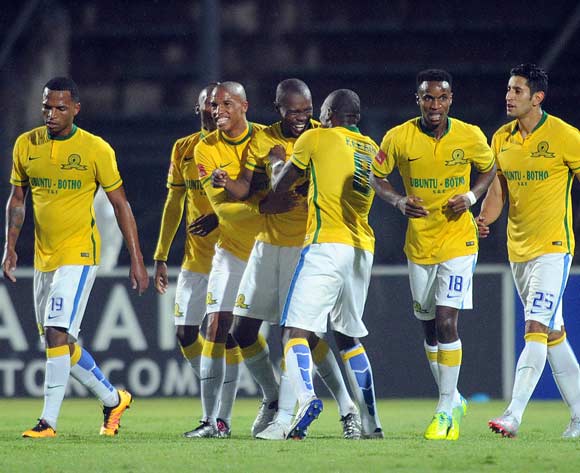 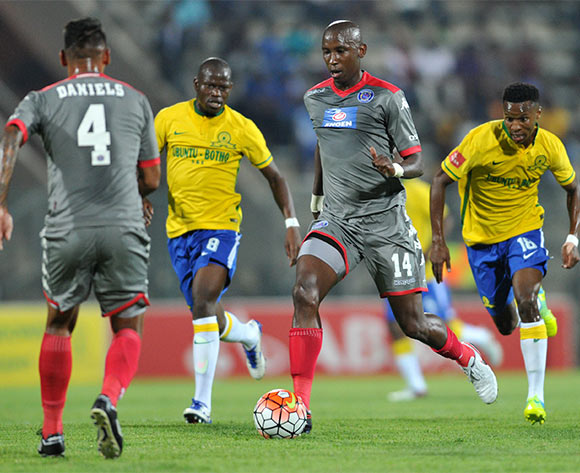 Welcome to the live play-by-play for the ABSA Premiership 2015/16 match between SuperSport Utd and Mamelodi Sundowns at Lucas Moripe Stadium.

Good evening and welcome to live Play by Play for the Absa Premiership clash between SuperSport United and Mamelodi Sundowns from Atteridgeville.
Soumahoro Bangaly is one of three centre backs included in the starting eleven by Pitso Mosimane. Counterpart Stuart Baxter starts with Thabo September in midfielder - as he did against Kaizer Chiefs.
1' The match is underway!
2' A win for Sundowns this evening will stretch their unbeaten run in the league to 18 games and subsequently open a 10 point gap between themselves and second placed Bidvest Wits with 8 games remaining.
7' Early free-kick played in by Billiat, it finds Arendse who heads wide. Referees whistle had gone though.
15' Ball falls to Brockie on the edge of the area and the striker tries his luck on the volley, ball was always sailing over though. Ambitious.
20' Billiat tries his luck from range, but the winger never looked comfortable as the ball flies well wide.
21' CHANCE! Somehow Castro fails to find the back of the net from close range after Billiat put it on a plate for the Colombian.
25' Dolly flashes his shot just over the crossbar. SuperSport will be happy with 'Downs shooting from range.
28' CHANCE! Billiat picks out Dolly at the far post, the winger has time to pick his spot, but only succeeds in firing his shot wide from a tight angle.
33' Break in play due to lightning in the area.
34' Play has finally resumed.
40' Asavela Mbekile (Mamelodi Sundowns) scores!

41' Counter-attack by Sundowns leads to the opening goal. Castro gets the better of Phala before sending Mbekile through on goal - the fullback shows great composure in chipping the ball over and advanced Williams.
45 + 1' The referee brings the first half to an end.

46' The second half is underway
51' Dean Furman (SuperSport Utd) is cautioned.

57' CHANCE! Phala loses his marker before firing in a low cross, but Nkhatha somehow fails to get a touch on the ball with the goal at his mercy.
62' Mamelodi Sundowns: Teko Modise replaces Themba Zwane

67' Sundowns turning on the style at the moment. Following a good spell of pressure by the hosts, 'Downs now look the most likely to score next.
74' Khama Billiat (Mamelodi Sundowns) is cautioned.

Welcome to the live play-by-play for the ABSA Premiership 2015/16 match between SuperSport Utd and Mamelodi Sundowns at Lucas Moripe Stadium.

No stopping Sundowns as Mosimane's men brush aside SuperSport

Goals from Asavela Mbekile and Khama Billiat inspired Mamelodi Sundowns to a 2-0 win over SuperSport United at the Lucas Moripe Stadium on Saturday.

A 16th win in 22 league fixtures opens a 10 point gap between the Brazilians and second-placed Bidvest Wits; victory also stretches their unbeaten run in the Absa Premiership to 18 games.

Following what was a cagey start to the game, Jeremy Brockie's volley attempt on 15 minutes triggered a series of goal-scoring chances at the other end of the park.

Billiat ran riot for the Brazilians, first setting up Leonardo Castro, who somehow missed from close range, before picking out Keagan Dolly, who blazed his effort from a tight angle across the face of goal.

Just as Sundowns were bossing proceedings, the rain made its appearance, with the teams forced off on 33 minutes due to lightning in the Atteridgeville area.

The game resumed after a lengthy break of 30 minutes, with Thuso Phala dancing past Mzikayise Mashaba before seeing his deflected effort wide of goal.

Sundowns would take the lead from the resulting corner-kick; Denis Onyango ignited the attack and after Castro dispossessed Phala, the Colombian released Mbekil,e who provided a striker's finish over the advancing Ronwen Williams five minutes before the interval.

Billiat put the game to bed in the 75th minute. Similar to the opening goal, Castro was the provider, this time the Colombian pick-pocketed a lethargic Dove Wome before sending his attacking partner through on goal; the Zimbabwean provided a cool finish into the roof of the net.

SuperSport United will look to put a dent in the Absa Premiership title ambitions of their local rivals Mamelodi Sundowns at the Lucas Moripe Stadium on 1 March 2016, kick-off at 19h30.

SuperSport returned to winning form in the league by beating Jomo Cosmos 4-2 away on February 27.

The Tshwane side has claimed 12 points from 10 home matches this season.

Matsatsantsa are placed 10th on the Absa Premiership log with 27 points from 21 matches.

Sundowns extended their unbeaten run in the league to 17 matches with a 2-1 win over Black Aces on February 24.

The Tshwane side has claimed 20 points from 10 away matches this season.

The Brazilians are placed first on the Absa Premiership log with 49 points from 21 matches.

In head-to-head stats, Sundowns and SuperSport have met in 49 league matches since 1990.

The Brazilians have claimed 24 wins compared to 14 for Matsatsantsa, while 11 matches have been drawn.

SuperSport have won five of their 24 home matches against Sundowns, suffering 13 defeats in the process.

When the teams met earlier this season, the Brazilians claimed a 2-0 home win.

‘Downs have won the last four successive league matches against United by an aggregate score of 10-2.