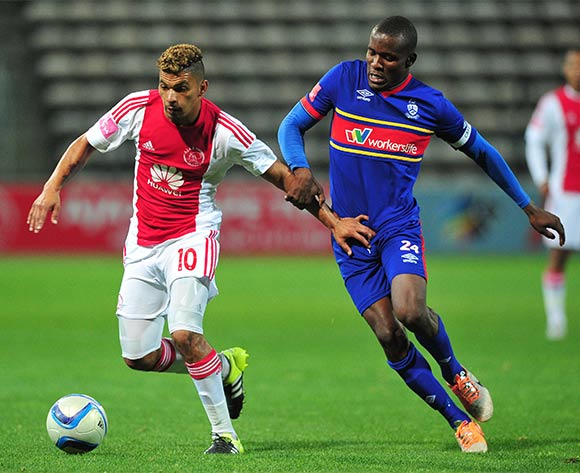 Toriq Losper of Ajax Cape Town holds off the attention of Ronald Ketjijere of Tuks during the Absa Premiership 2015/16 game between Ajax Cape Town and University of Pretoria at Athlone Stadium, Cape Town on 21 October 2015 ©Ryan Wilkisky/Backpagepix

Welcome to the live play-by-play for the ABSA Premiership 2015/16 match between University of Pretoria and Ajax Cape Town at TUKS Stadium.

Welcome to the live play-by-play for the ABSA Premiership 2015/16 match between University of Pretoria and Ajax Cape Town at TUKS Stadium.

University of Pretoria suffered a massive blow in their bid for Absa Premiership survival, going down 1-0 to Ajax Cape Town at Tuks Stadium on Wednesday.

Toriq Losper scored the only goal of the game as the Urban Warriors snapped their losing streak. Defeat for AmaTuks leaves them three points behind Jomo Cosmos and just two points above bottom-placed Maritzburg United, who have two games in hand.

In desperate need of a win having watched Cosmos grind out a 1-0 victory over Kaizer Chiefs on Tuesday evening, AmaTuks head coach Shaun Bartlett named an attacking line-up as he went in search of nothing but all three points.

Ajax, though, matched the hosts’ desire and dominated the early chances, with Tristyn Coetsee forced into a good save by Tashreeq Morris on 12 minutes.

Losper then tried his luck from 40 yards, Coetsee struggled to backtrack in the heavy rain, but did just about enough to deny the Ajax attacker.

The Urban Warriors didn't have to wait too long for the opener, with Losper getting the better of Coetsee soon after. The ‘keeper managed to keep out his initial effort, but could do nothing to deny Losper, who pounced to net his third league goal of the season.

Morris had a chance to double the visitors’ lead in the 83rd minute, but having done well to keep his balance inside the area, the sturdy forward shot wide of goal.

Defender Partson Jaure led a late charge by Shaun Bartlett's troops, with the defender forcing Anssi Jaakkola into a low save in second-half stoppage time. In the end Ajax held on for all three points, to edge closer to the top eight.

University of Pretoria will look to rack up a third unbeaten Absa Premiership match when they host Ajax Cape Town at Tuks Stadium on 16 March 2016, kick-off at 19h30.

The University side played to a fourth away draw by holding Black Aces 1-1 on March 12.

The Tshwane club has claimed 13 points from 11 home matches this season.

AmaTuks are placed 14th on the Absa Premiership log with 17 points from 22 matches.

Ajax have gone three league matches without a win after losing 3-0 at Platinum Stars on March 13.

The Cape side has claimed 10 points from 11 away matches this season.

The Urban Warriors are placed 10th on the Absa Premiership log with 27 points from 22 matches.

In head-to-head stats, Ajax and Tuks have met in seven league matches since 2012/13.

The Pretoria side has two wins to their name, while the Urban Warriors have claimed just one win. Four matches have been drawn.

Tuks are unbeaten in home league matches against Ajax, with one win and two matches from three games.

When the teams met earlier this season they played to a goalless draw in Cape Town.

The teams’ first league match produced six goals, while their six since have produced a cumulative total of just five goals.