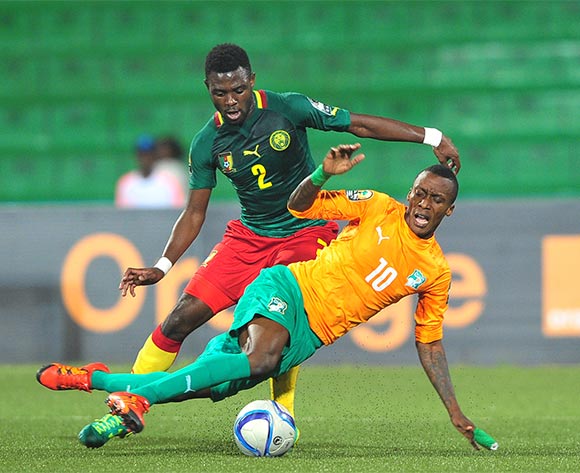 Krahire Yannick Zakri of Ivory Coast is fouled by Joseph Ngwem of Cameroon during the 2016 CHAN Rwanda quarterfinal between Cameroon and Ivory Coast at Huye Stadium, Butare on 30 January 2016 ©Ryan Wilkisky/BackpagePix 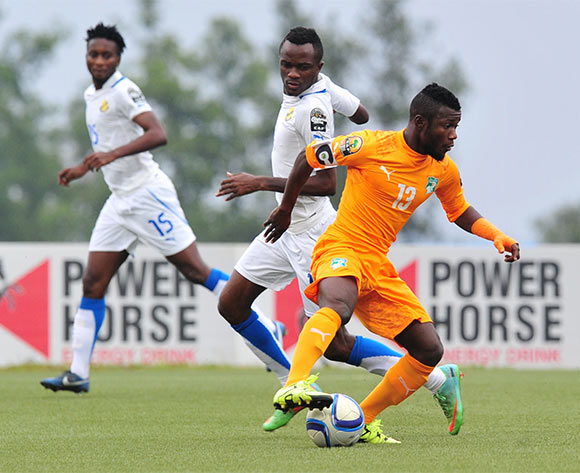 Yao Serge Nguessan of Ivory Coast challenged by Mario Bernard Mandrault of Gabon during the 2016 CHAN Rwanda, match between Ivory Coast and Gabon at the Huye Stadium in Butare, Rwanda on 24 January 2016 ©Muzi Ntombela/BackpagePix

The CHAN quarter-final encounter was played at the Stade Huye in Butare, Rwanda.

The Elephants of Ivory Coast dominated the opening stages of the game as they managed to keep the Indomitable Lions defence very busy.

At the other end, Indomitable Lions shot-stopper Ali Badra Sangare was forced to make a save from Yao Serge N'Guessan's well-taken free-kick in the 17th minute.

Guiza found some space to unleash a long range effort on the half-hour mark, but his attempt failed to trouble Nyame as the ball sailed over the cross-bar.

The Indomitable Lions had a chance to take the lead again five minutes after the restart. However, Moumi placed his effort from a free-kick over the goal-posts.

In the 73rd minute, Ivory Coast defender Marcelin Koffi headed the ball wide of the target following a corner-kick as the Ivorians looked to break the deadlock.

With three minutes left on the clock, Moumi was presented with a great opportunity to grab the winning goal. However, he fired wide of the target.

The match ended 0-0 and the two teams headed for extra-time at the Huye Stadium.

The Elephants dominated the entire extra-time period and they scored three times.

Koffi Davy Mahinde opened the scoring in the 94th minute with a good finish much to the delight of the Ivorian fans.

Then the Elephants doubled their lead in the 99th minute when Hemann Djobo finished with aplomb with the keeper well-beaten.

Serge N'Guessan sealed Ivory Coast's 3-0 victory with a beautiful a goal in the 111th minute.

Africa heavyweights Cote d’Ivoire and Cameroon go head-to-head for a place in the 2016 African Nations Championship (CHAN) semifinals in Butare, Rwanda on Saturday.

Cote d’Ivoire advanced to the knockout stages following wins over Gabon and Morocco; having lost 1-0 to the hosts in the opening game of the tournament.

Much is expected of the 2015 African Cup of Nations Champions and head coach Michel Dussuyer believes his team are improving with each game they play at the on-going tournament.

"We scored four goals [against Gabon] which is very good especially for my strikers. In general, this gives us more confidence for the future matches" said the French born mentor.

"Some of my players have no experience which resulted in a lot of hesitation during our matches - especially in our game against the host country, but progressively we are improving. Having qualified for the quarters, the first objective is accomplished and I hope we will improve match after match."

The Indomitable Lions were extremely efficient in attack and are sure to cause the Elephants defence all sorts of problems.

Having reached the quarters, head coach Mpile Martin Ndtoungou, wants his team to go all the way and win the trophy.

"Having good performance against the toughest team in our group and drawing with Ethiopia confirms the uncertainties in football. We prepared for this game just like any other match,"said Ndtoungou.

"The next match against Cote d’Ivoire is the knockout stage, and we don’t have any option but to win and qualify for the semifinals."

The winner will face either Mali on Tunisia in the final four.

Kick-off at the Stade Huye is scheduled for 18h00 CAT.