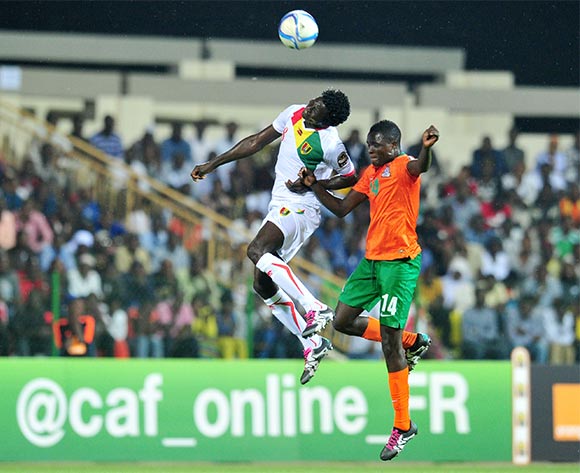 Jack Chirwa of Zambia battles with Ibrahima Sory Soumah of Guinea during the 2016 CHAN Rwanda, Quarterfinal match between Zambia and Guinea in Rubavu Stadium Rubavu, Rwanda on 31 January 2016 ©Muzi Ntombela/BackpagePix 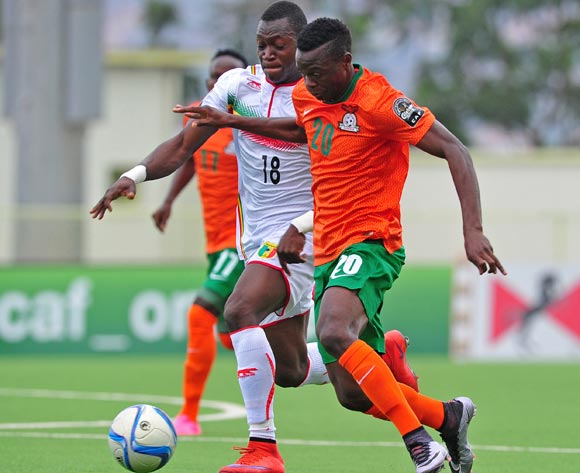 Patson Daka of Zambia is challenged by Aliou Dieng of Mali

Guinea have booked themselves a spot in the 2016 CAF African Championships semifinals after beating Zambia 5-4 on penalties at Umuganda Stadium in Gisenyi, Rwanda on Sunday evening.

From the first minute Syli Nationale took control of the match and enjoyed good touches in the Chipolopolo half.

With Zambian skipper, Katongo, a highly watched man by Guinea defenders, George Lwandamina’s side was forced to play long balls.

Consquently, chances on goal were at a minimum as both teams defended stoutly.

In the 27th minute Salulani Phiri tried to beat Keita from long range shot as he spotted the keeper off his line ,but the ball went wide.

With 10 minutes to go before the half time break, a good shot by Ibrahima Sankhon nearly beat Jacob Banda, but it went inches wide off the far post.

With the start of the second half rain began to fall which resulted in both teams' play becoming a little sloppy.

A well taken shot by Sankhon from a set piece nearly put Syli Nationale ahead in the 72nd minute, but his effort struck the woodwork.

In the 80th minute Katongo nearly scored when he saw his header going wide off the far post.

Regular time ended 0-0 and the match moved into extra-time.

Guinea nearly grabbed a goal in the first half of extra time when substitute Boniface Haba was denied twice by Banda from close range.

The second stanza saw the Zambians missing two chances with Sakala aiming to beat the sleepy defence, but Keita was alert to clear the danger.

With just five minutes remaining, Keita denied Chama in the box after a good run and shot by the Zambian.

A few minutes later Banda showed his quality when he stopped Camara in a one on one situation.

Neither side could find a goal as 120 minutes of action ended goalless.

Keita scored the winning penalty to ensure Syli Nationale are through to meet DRC in the semifinals.

Chipolopolo out to take down Guinea

Zambia will aim to take down tournament debutants Guinea when the teams meet in the quarterfinals of the 2016 African Nations Championship on Sunday. The match is set for the Umuganda Stadium in Gisenyi, kick-off at 18h00 CAT.

The Southern Africans come into the knockout stage having dominated Group D: they picked up seven points from a possible nine to finish top of the standings and kept three successive clean sheets, making them the only team in the tournament to boast such a defensive record.

Chipolopolo’s only worry is that they have scored just two goals. In addition, those goals have come from veterans Isaac Chansa and Chris Katongo – the duo know how to win continental tournaments, having been a part of the Zambian triumph in the 2012 Africa Cup of Nations, but coach George Lwandamina must be concerned that the rest of his team is yet to step up and take responsibility as they have.

Their opponents, Guinea, have already made a success of their CHAN debut by reaching the quarterfinals from a tough Group C, which included Tunisia, Nigeria and Niger.

The Syli Nationale played to successive 2-2 draws against Tunisia and Niger before facing the Super Eagles in their final match on Tuesday. They were expected to succumb to their fellow West Africans, but a goal from Ibrahima Sory Sankhon on the stroke of half time – and a determined defensive effort – took them to a surprise win and second place on the mini log.

Zambia and Guinea have met in four previous matches according to FIFA statistics, with each team claiming two wins. Their most recent meeting – and their only clash in a continental tournament – saw the Syli Nationale claim a 2-1 victory in Alexandria in the group stage of the 2006 Africa Cup of Nations.

The winners will face either Rwanda or DR Congo in the first semifinal in Kigali next midweek.