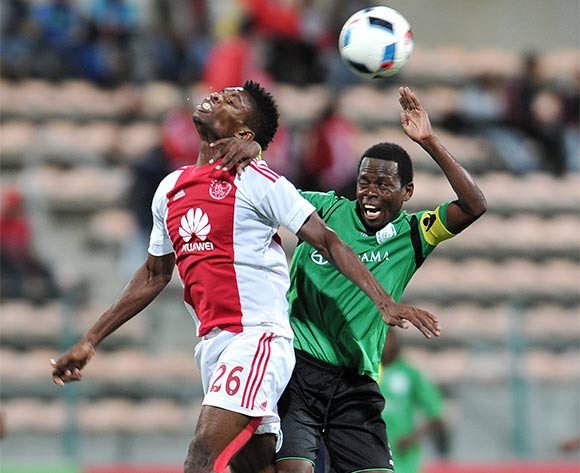 Ajax Cape Town are out of the Confederation Cup, following a 2-3 aggregate defeat at the hands of Sagrada Esperanca.

The Angolan side rallied from a 2-1 defeat at home last weekend to beat the Urban Warriors 2-0 at the Athlone Stadium on Saturday night, thanks to a brace from as Arsenio Cabungula.

The visiting team from Angola showed their intentions early on, Ajax keeper Brandon Petersen having to rush off his line to stop Aderito Chissoca from going in on goal after two minutes, the likes of as Cabungula and Osvaldo Palana then getting in shots on goal by the time 15 minutes had been played.

The Urban Warriors showed a few glimpses of danger in attack themselves, such as Prince Nxumalo’s storming run on 20 minutes into the box, but for the most part the Angolan side’s defence was not overly stretched.

Esperanca were to take what was arguably a deserved lead on 22 minutes, Cabungula reacting quickly to score from five yards out after an excellent cross from the right wing by Manuel Ngalula.

Following the setback, the Cape side upped their efforts to try and wrestle back the initiative, but when they did break through the visitor’s defence, such as Toriq Losper did on two occasions just after the half hour mark, goalkeeper Yuri Tavares showed himself to be on top of his game.

There was also a half-hearted call for a penalty from the home side when Bantu Mzwakali raced Tavares to the ball just before half time, but the correct decision was probably made in giving the goal kick.

There was not too much to write home about in the first 15 minutes of the second half, the home side dominating possession, but failing to find the spark they needed in the final third of the field. Indeed, as the match progressed with the result on a knife edge, the tension resulted only in the game become scrappy.

There were opportunities for Roger De Sa’s men, although these were mainly limited to shots from range, Franklin Cale twice missing the target from outside the box, while both Cale and Losper failed to work the Esperanca goalie with shots from inside the box midway through the second period.

The visiting side meanwhile enjoyed some periods of attacking intent themselves, making for some anxious moments for the home fans, although the Urban Warriors rearguard was well organized.

Mzwakali could have put the tie to bed in the 85th minute, but he was wasteful with a header from 10-yards out which ballooned over the bar, before Losper sent a shot just wide a few minutes later after breaking through on the left.

Instead, the visiting side struck in the 90th minute, when a mistake from Losper saw the ball passed out to the left for Cabungula, who was clinical in his finish.