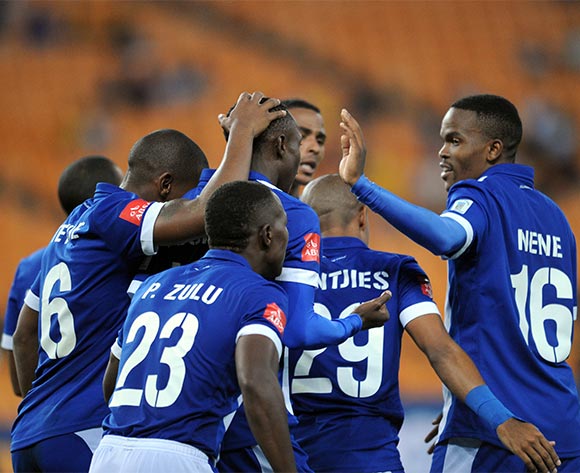 Evans Rusike of Maritzburg United celebrates a goal with teammates 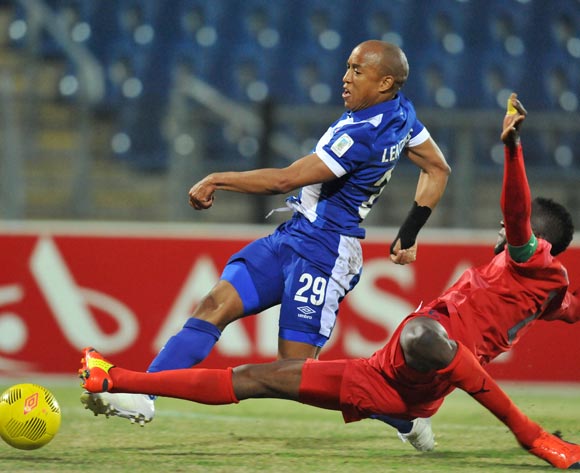 Welcome to the live play-by-play for the ABSA Premiership 2015/16 match between Jomo Cosmos and Maritzburg Utd. at Olen Park.

Welcome to the live play-by-play for the ABSA Premiership 2015/16 match between Jomo Cosmos and Maritzburg Utd. at Olen Park.

Team of Choice send Cosmos down

Maritzburg United came from a goal down to secure a dramatic 3-1 win over Jomo Cosmos at Olen Park on Saturday afternoon.

The result sees the Team of Choice secure an amazing recovery and avoid relegation from the Absa Premiership despite spending the vast majority of the season in the red zone, while Ezenkosi suffer direct relegation after University of Pretoria claimed a win over Golden Arrows.

United almost claimed the lead 16 minutes in when a corner kick from Sheldon Van Wyk saw Cosmos’ Mxolisi Mashumbu forced to clear off his own goal line.

Just over 10 minutes later it was Ezenkosi who claimed the lead though Linda Mntambo, who struck home a superb left-footed shot from outside the box which gave goalkeeper Virgil Vries no chance whatsoever.

United reacted to going behind by sending on attacking midfielder Gregory Maasdorp in place of defender Thamsanqa Teyise with just under 10 minutes of the first half left to play, but the interval saw the hosts still 1-0 up.

The Team of Choice made another change in attack at the start of the second half, sending on former Golden Arrows and Kaizer Chiefs player Abia Nale in place of promising youngster Sheldon Van Wyk, who was unable to assert himself in the match.

On 59 minutes Maritzburg almost equalised through Philani Zulu only for Sherwyn Naicker to make a brilliant save, before they were denied what looked to be a clear penalty for hand-ball in the 18-yard area by Thato Lingwati.

Cosmos looked to be in control of proceedings, but in the 82nd minute United’s determination was rewarded with a goal from substitute Mohau Mokate, who put a looping header over Naicker after the ball had ping-ponged around in the home side’s box to make it 1-1.

Just four minutes later Maritzburg’s comeback was completed by Evans Rusike, who arrived late the near post to touch home a right-flank cross from Abia Nale to make it 2-1 and put the KwaZulu-Natal team into safety after spending almost the whole season under threat of relegation.

Rusike added another goal deep into injury time when Cosmos were desperately throwing men forward in search of an equaliser, seeing the final score end 3-1 in favour of Maritzburg United.

Jomo Cosmos and Maritzburg United will fight for Absa Premiership survival when they meet at Olen Park on 21 May 2016, kick-off at 15h00.

Cosmos suffered an 11th away defeat from 15 matches when they were beaten 1-0 at Golden Arrows on May 11.

The Potchefstroom-based side has claimed 19 points from 14 home matches this season.

Ezenkosi are placed 14th on the Absa Premiership log with 25 points from 29 matches. A draw will be enough to guarantee survival, while a defeat will see them finish in the bottom two.

Maritzburg claimed their fifth league win of the season when they defeated Ajax Cape Town 1-0 at home on May 11.

The KwaZulu-Natal side has claimed 14 points from as many away matches this season. Their last loss on the road was at Kaizer Chiefs back in February.

The Team of Choice is placed 15th on the Absa Premiership log with 24 points from 29 matches. A win would see them move out of the relegation zone and secure survival.

In head-to-head stats, Maritzburg and Cosmos have met in nine league matches since 2005/06.

Ezenkosi have three wins compared to two for the Team of Choice, while four matches have been drawn.

Cosmos have an unbeaten home record against United in the league, with two wins and two draws from four matches as hosts.

When the teams met earlier this season in Pietermaritzburg they played to a goalless draw.

Four of the teams’ last five league meetings have ended in draws.