Sabelo Ndzinisa of Swaziland challenged by Nqobizitha Masuku of Zimbabwe during the 2016 Cosafa Cup match between Zimbabwe and Swaziland at Sam Nujoma Stadium in Windhoek Namibia on 11 June, 2016 ©Muzi Ntombela/BackpagePix 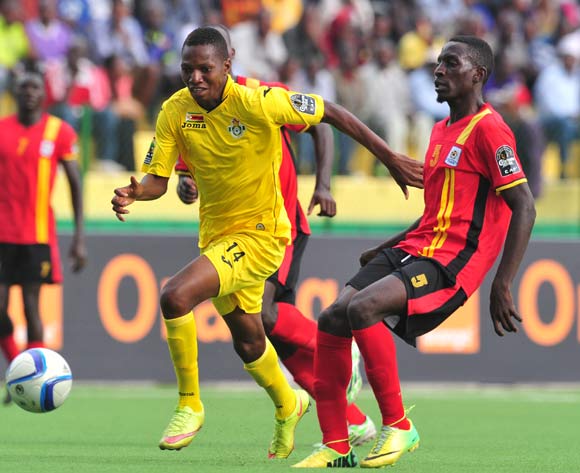 Raphael Manuvire of Zimbabwe challenged by Bernard Muwanga of Uganda during the 2016 CHAN Rwanda, match between Uganda and Zimbabwe at the Rubavu Stadium in Rubavu, Rwanda on 27 January 2016 ©Muzi Ntombela/BackpagePix

Swaziland and Zimbabwe played to a 2-2 stalemate in the Group A 2016 Cosafa Castle Cup opener on Saturday afternoon.

Felix Badenhorst scored a brace for Sihlangu Semnikati, but the Warriors showed great resilience to come from a goal down on two occasions, and subsequently earn what could prove to be a valuable point.

Badenhorst, who is a reported transfer target of South Africa Premier Soccer League side Kaizer Chiefs, showed why he is so highly rated in the 17th minute.

The Mbabane Swallows forward with a superbly timed run in behind the Zimbabwe defence before heading the ball past Tatenda Mukuruva, 1-0.

Swaziland dominated most of the match and should have been at least two goals up before Obadiah Tarumbwa leveled matters on 56 minutes.

The former AmaTuks forward's goal a carbon copy of Badenhorst's opener; ghosting in behind the Swazi defensive line before guiding his header into the back of the net.

Swaziland restored their lead in the 65th minute. Badenhorst converting from the penalty spot after Danny Phiri handled the ball inside the area.

But, the Warriors struck back once more. Ronald Pfumbidzai punishing poor defending by Harris Bulunga's men with 12 minutes remaining - his overhead kick an early contender for goal of the tournament.

Zimbabwe and Swaziland are set to lock horns in the 2016 Cosafa Castle Cup opener on Saturday afternoon.

It all kicks-off in the Namibian capital of Windhoek this weekend with the hosts eager to defend the title they won in South Africa 12 months ago.

First up, though, is the group stages of the competition with two group of four teams going head-to-head for a place in the knockout stages of the Southern African showpiece.

Four-time champions Zimbabwe face Swaziland in the Group A opener this weekend with the Warriors riding high following their qualification for the 2017 African Cup of Nations.

But, the Warriors will be without the likes of Khama Billiat, Willard Katsande and Knowledge Musona with Callisto Pasuwa naming a squad of mostly locally based players. But for Jomo Cosmos striker Charlton Mashumba, all the footballers ply their trade on home soil.

Swaziland on the other hand have named a strong squad including the likes of Felix Badenhorst and Tony ‘TT’ Tsabedze, who have both attracted interest from South Africa's Premier Soccer League.

Sihlangu Semnikati have never reached a Cosafa Cup final. Head coach Harris Bulunga and his troops will be hoping this is finally their year.

Swaziland have brought basically the same team that we played in the Afcon games and it must be noted that they are very offensive side and we should not underrate them," the Zimbabwe mentor said.

The two side's have already clashed on two occasions this year in home and away 2017 Afcon qualifiers. A 1-1 stalemate in Swaziland was followed by an emphatic 4-0 win for Zimbabwe in Harare.