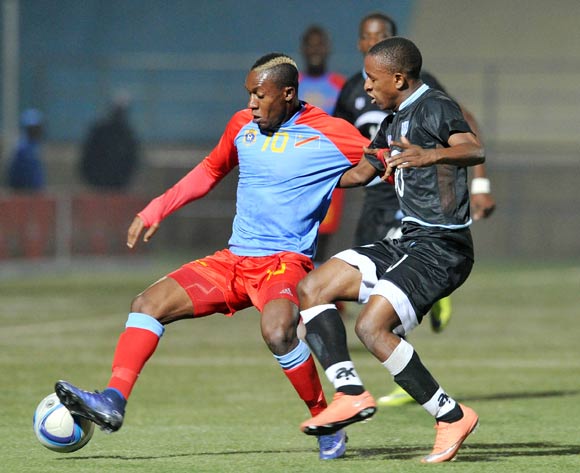 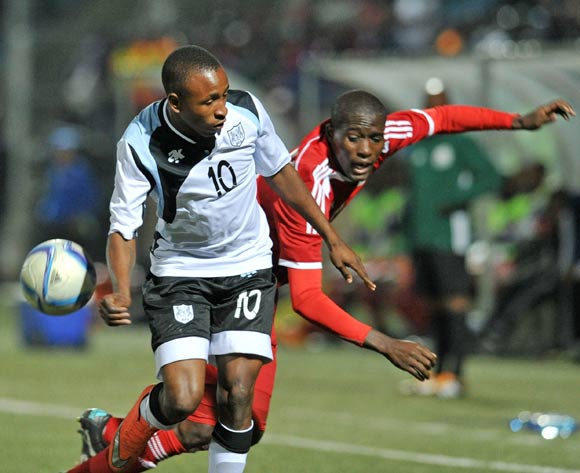 Onkabetse Makgantai of Botswana fouled by Denzil Haoseb of Namibia during the 2016 Cosafa Cup Quarterfinals match between Botswana and Namibia at Sam Nujoma Stadium in Windhoek Namibia on 18 June, 2016 ©Muzi Ntombela/BackpagePix

The match ended in a goalless stalemate in regulation time at the Sam Nujoma Stadium on the night in Windhoek.

Botswana's Zebras will now take on their neighbours South Africa in this year's COSAFA Castle Cup final on Saturday.

There were no goalscoring opportunities in the opening 15 minutes of the semi-final encounter on a chilly evening in Windhoek.

Guy Lusadisu came close to scoring for the Leopards after receiving the ball in the Zebras box, but he placed his effort wide of the target in the 19th minute.

Zebras forward Thabang Sesinyi should have headed home the opener four minutes later, but he failed to direct his free header forwards the target.

Sesinyi had another free header in the 26th minute and this time the striker headed the ball onto the side-netting from the blind spot.

Zebras winger Kabelo Seakanyeng made a run from the midfield on the stroke of half-time and his low shot was saved by DRC keeper Herve Lomboto.

Sesinyi and Seakanyeng had goalscoring opportunities ten minutes after the restart, but the Botswana duo were unable to break the deadlock.

The Zebras had the ball in the back of the net from Seakanyeng's free-kick on the hour-mark and the match referee blew his whistle for offside.

DRC head coach Florent Ibenge made the first change of the game in the 66th minute introducing Junior Baometo for Nelson Omba.

Zebras responded by pulling out Seakanyeng for Joel Mogorosi seven minutes later as they looked to break the deadlock on the night.

Leopards midfielder Lusadisu made a late run into the Zebras box and he unleashed a low shot which missed the target in the 71st minute.

The attacking midfielder nearly snatched a late winner for his side in the 90th minute, but his shot was brilliantly saved by Masule.

In the end, the encounter ended in a goalless stalemate in regulation time and the match went straight into a penalty shootout.

Botswana will look to overcome Democratic Republic of Congo (DRC) in the 2016 COSAFA Castle Cup semi-final clash at the Sam Nujoma Stadium on Wednesday.

The Zebras of Botswana reached the semi-finals after beating defending champions Namibia 5-4 on penalties in Windhoek last weekend.

Tournament hosts Namibia had been held to a 1-1 draw by Botswana in regulation time with Hendrick Somaeb and Dacosta Angula (own-goal) netting.

The Zebras also participated in last year's semi-finals in North West, South Africa, but they were defeated 2-1 by Mozambique.

Peter Butler's side will look to their pacey young forward Onkabetse Makgantai against DRC as the Zebras look to book their place in final.

British coach Butler is hoping to guide Botswana to their maiden COSAFA Cup title this year.

Meanwhile. DRC will be gunning for Botswana's scalp when the two nations lock horns on Wednesday evening.

The Leopards of Congo reached the semi-finals after edging out Mozambique 1-0 at the Sam Nujoma Stadium last weekend.

Nelson Munganga Omba's 37th minute header from a great cross was enough to hand the Central African nation the victory.

DRC, who are the reigning African Championship of Nations (CHAN) champions, were invited to the regional tournament and they accepted the invitation.

One of Florent Ibenge's dangermen is Lema Chikito Mabidi who currently plies his trade in Morocco for Raja Club Casablanca.

The winner between Botswana and DRC on Wednesday will take on Swaziland or South Africa in the final on Saturday.