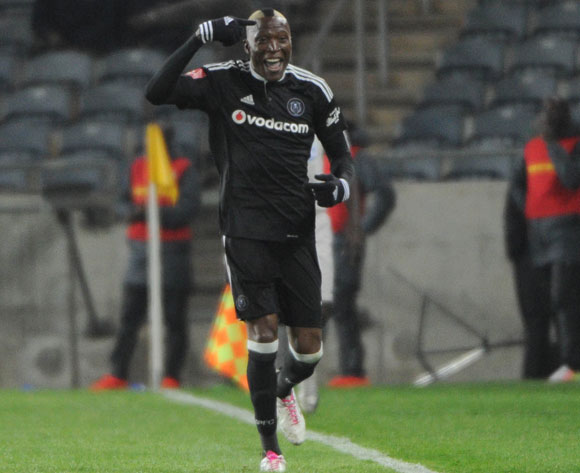 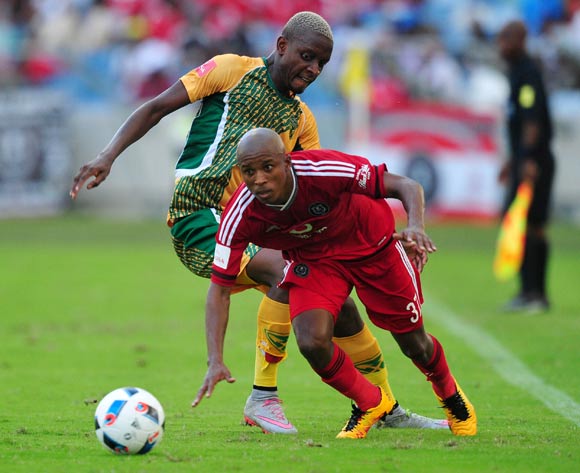 Welcome to the live play-by-play for the ABSA Premiership 2016/17 match between Orlando Pirates and Golden Arrows at Orlando Stadium.

1' The match is underway!
2' Pirates wear a traditional all-black kit, while Arrows are in green and gold.
4' Pirates with a free kick which rebounds back off the wall before Oupa Manyisa lets fly and forces Mbaeva into a fine save!
10' Up to the 10 minute mark, still goalless at Orlando Stadium. It's Bucs who are seeing more of the ball thus far.
12' Pirates with the first corner kick of the match, which sees Bernard Morrison with a half chance before he's closed down in the box.

18' Wayde Jooste shoots for goal from a free kick, it deflects off the top of the wall and goes out for a corner kick.
21' Lerato Lamola goes on a cracking run down the left, but his attempted cross for Kuda Mahachi is too strong and a golden chance is lost!
24' Nduduzo Sibiya reckons he's clean in goal, but the offside flag is up.
28' Happy Jele clears well from an Arrows free kick, before Bucs counter attack and Bernard Morrison's low cross is well cut out by Nkanyiso Mngwengwe.
30' Kuda Mahachi turns and shoots left-footed from long range... Felipe Ovono makes a solid save to smother the effort.
33' Thabo Rakhale with a good cross from the right, just too high for the run of Tendai Ndoro.
35' Wayde Jooste with a clear sight of goal after sprinting free down the right, but from a tight angle he can only hit the side netting!
41' Lerato Lamola tumbles in the box but it appears a lame attempt to win a penalty and the referee is uninterested.
44' Bernard Morrison spots the 'keeper off his line and very nearly scores from almost 50 metres out, with his effort drifting just over the crossbar!
45 + 1' Clear chance in the box for Kuda Mahachi, but he drags a shot wide with only the 'keeper to beat!
45 + 2' The referee brings the first half to an end.

46' The second half is underway
49' Tendai Ndoro (Orlando Pirates) scores!

50' Thabo Rakhale exchanges passes with Mpho Makola before squaring for Tendai Ndoro, who provides a neat finish to make it 1-0 to Pirates!
55' Arrows must be regretting all their missed chances in the first half, but there's still plenty of time for them to get back in this game...
57' Tendai Ndoro squeezes past a challenge before shooting from outside the box, but his effort is wide of the goalkeeper's right-hand post.
60' Nkanyiso Cele (Golden Arrows) is cautioned.

73' Thabo Qalinge with half a chance to shoot, but he instead tries to pick out Thabiso Kutumela and his pass is cut out.
76' Tendai Ndoro (Orlando Pirates) scores!

85' Ndoro now down with cramp, but if anyone deserves a few minutes to catch his breath tonight it's him - what a performance!
88' Orlando Pirates: Ayanda Nkosi replaces Tendai Ndoro

90' Max Mbaeve makes a good save to keep out a low shot from Ayanda Nkosi!
90 + 5' The referee blows the whistle for Full Time.

Welcome to the live play-by-play for the ABSA Premiership 2016/17 match between Orlando Pirates and Golden Arrows at Orlando Stadium.

Orlando Pirates romped to a 3-1 win over Golden Arrows in Soweto on Wednesday night, with Tendai Ndoro’s hat-trick getting the Buccaneers off to a winning start in the new Absa Premiership season.

The Zimbabwean scored all of his goals in the second half, while Abafana Bes’thende – whose consolation strike came via Nduduzo Sibiya – will rue their missed opportunities in a dominant first half performance when they should have put the hosts to the sword.

Pirates enjoyed a stronger start to the game and had the first shot on goal four minutes in when Oupa Manyisa’s long range effort was parried away by Arrows goalkeeper Max Mbaeva, but after that it was the away side which looked far more dangerous in attack.

Abafana Bes’thende’s pace and direct play down the flanks caused endless problems for Bucs in the first half, with the front four of Wayde Jooste, Lerato Lamola, Kuda Mahachi and Nduduzo Sibiya constantly looking dangerous, though they often lacked the killer instinct in the danger area to punish their hosts.

Pirates made a tactical change at the start of the second half, sending on Thabo Qalinge in place of Bernard Morrison, but it was their other winger Thabo Rakhale who opened up Arrows defence in the 49th minute to help Tendai Ndoro break the deadlock.

Rakhale enjoyed a clever exchange of passes with Mpho Makola down the right before squaring for Ndoro, who provided a neat finish past Mbaeva to make it 1-0 to the Buccaneers.

Pirates’ lead lasted just 12 minutes, with Arrows hitting back just after the hour mark. Felipe Ovono spilled a tame low cross from the left flank and Mahachi hit the post from the loose ball – the chance appeared to be gone, but Sibiya reacted quickest to the rebound to score with a low shot.

Ndoro restored Bucs’ advantage in the 67th minute, scoring his second goal with a downward header that got the better of Mbaeva after being picked out by a pin-point free kick delivery by Makola – though Arrows’ marking in the box was diabolical.

The Zimbabwean striker completed his hat-trick with just under 15 minutes of regulation time to play, benefitting from great combination play between Makola and Thabiso Kutumela before curling a side-foot shot into the corner to make it 3-1.

Orlando Pirates will get their 2016/17 Absa Premiership campaign underway by hosting Golden Arrows at Orlando Stadium on 24 August 2016, kick-off at 19h30.

Pirates finished in seventh place on the log last season, claiming 41 points from their 30 matches.

The Soweto giants had a poor end to the campaign, failing to win any of their final five league games.

Arrows finished in ninth place on the log last season, claiming 40 points from their 30 matches.

The Durban side lost their final game of the campaign but otherwise had a strong end to 2015/16, claiming three wins from their last five fixtures.

The Buccaneers have 17 wins compared to five for Abafana Bes’thende, while eight matches have been drawn.

Pirates have won nine of their 15 home matches against Arrows, suffering just two defeats in the process.

Last season’s two league matches between the teams saw Abafana Bes’thende claim a surprise 2-0 win in Soweto, but Bucs claimed revenge with a 4-1 victory in Durban.

The teams’ 30 league matches have produced a total of 70 goals.