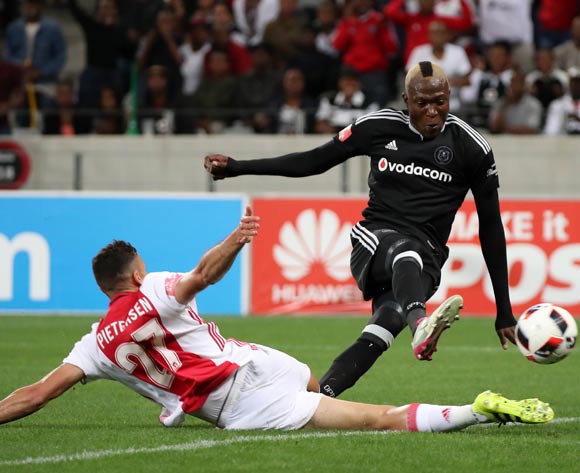 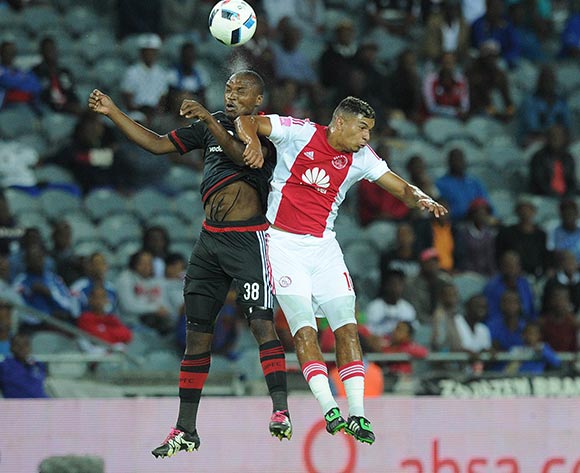 Welcome to the live play-by-play for the ABSA Premiership 2016/17 match between Ajax Cape Town and Orlando Pirates at Cape Town Stadium.

Welcome to our live coverage of the Absa Premiership game between Ajax Cape Town vs. Orlando Pirates at the Cape Town Stadium.
1' The match is underway!
4' Ajax are dominating possession in the early stages of the game as they look to grab an early goal.
8' Pirates midfielder Makola plays a cross into the Ajax box and Mabaso clears the ball away.
11' Another attack by the visitors - Mobara plays a through ball for Ndoro, but the Pirates striker is ruled off.
14' Ajax midfielder Losper unleashes a low shot from range and Pirates keeper Mhlongo produces a low save.
17' The home side launch a quick counter and Paulse places his shot over the Pirates goal-posts
21' Ajax star Pietersen's volley is cleared off the line by Pirates captain Manyisa. Bucs are under pressure.
24' Happy Jele (Orlando Pirates) is cautioned.

28' Ajax midfielder Losper pulls the trigger from the right and his effort goes just over the crossbar.
30' It remains goalless as we reach the half-hour mark.
32' Pietersen's long ball finds Paulse in the Pirates box and the Ajax striker's header is saved by Mhlongo.
36' Tendai Ndoro (Orlando Pirates) scores!

38' Ndoro makes it 2-0 to Pirates.
39' Manyisa plays a through pass for Ndoro who fires past Petersen with a low shot.
41' Edwin Gyimah (Orlando Pirates) is cautioned.

45' Mzwakali's cross into the Pirates box finds his Ajax teammate Lebusa who heads wide of the target.
45' The fourth official has added two minutes.
45 + 2' The referee brings the first half to an end.

46' The second half is underway
49' Ajax winger Mzwakali's cross from the right is easily gathered by Pirates keeper Mhlongo.
49' Nathan Paulse (Ajax Cape Town) is cautioned.

85' Ajax are doing most of the attacking in the late stages of this encounter.
89' CLOSE! Mayambela's shot goes inches wide of the target with Pirates keeper Mhlongo rooted to the ground.
90' The fourth official has added three minutes.
90 + 2' GREAT SAVES! Pirates keeper Mhlongo produces two great saves to deny Ajax a late equalizer in stoppage time.
90 + 3' The referee blows the whistle for Full Time.

Welcome to the live play-by-play for the ABSA Premiership 2016/17 match between Ajax Cape Town and Orlando Pirates at Cape Town Stadium.

Although, Ajax dominated possession in the opening stages of the league encounter, they were unable to beat Pirates goalkeeper Brighton Mhlongo who was in fine form.

At the other end, Pirates striker Tendai Ndoro beat Ajax goalkeeper Brandon Petersen from close range to make it 1-0 to the visitors in the 36th minute.

The Buccaneers led 2-0 at the break.

However, Ajax reduced the deficit through Nathan Paulse who headed home with the Pirates defence caught napping eight minutes into the second-half.

Ajax continued to push forward, but they struggled to find a second.

The came close late on, but Pirates' keeper Brighton Mhlongo made a great stop to deny Lebohang Mokoena in the 91st minute.

Despite Ajax's late attacks, Mhlongo and his Pirates teammates stood firm at the back and ultimately, they emerged 2-1 winners.

The win is Pirates' second of the league season in as many games while it is a first loss for Ajax.

Ajax Cape Town will target their first win of the new Absa Premiership season when they host Orlando Pirates at the Cape Town Stadium on 13 September 2016, kick-off at 19h30.

Ajax’s opening league match saw them played to a 1-1 draw away to newcomers Baroka FC on August 23.

The Urban Warriors are placed seventh on the Absa Premiership log with one point from as many matches.

Pirates opened their league campaign with a 3-1 home win over Golden Arrows on August 24.

The Buccaneers are placed first on the Absa Premiership log with three points from one match.

The Buccaneers have claimed 19 wins compared to six for the Urban Warriors, while nine matches have been drawn.

Ajax have won four of their 17 home matches against Pirates, suffering six defeats in the process.

Last season the Buccaneers claimed a league ‘double’ over the Urban Warriors, winning 2-1 both home and away.