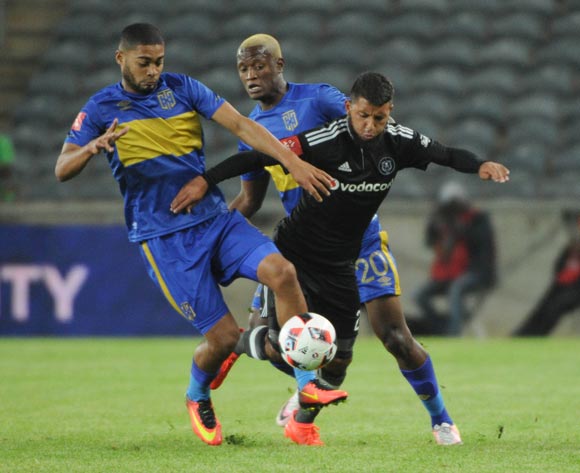 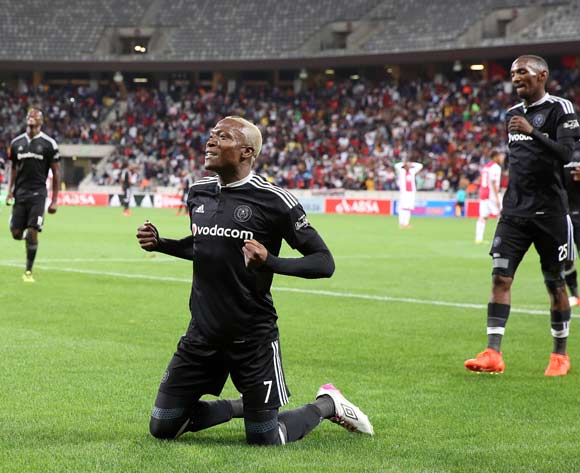 Welcome to the live play-by-play for the ABSA Premiership 2016/17 match between Orlando Pirates and Cape Town City FC at Orlando Stadium.

Welcome to the live play-by-play for the 2016/17 ABSA Premiership match between Orlando Pirates and Cape Town City at Orlando Stadium in Johannesburg.
Pirates are eyeing their third consecutive league victory, while City are looking to return to winning ways.
1' The match is underway!
2' Early long range shot from City midfielder Ngoma flies over the Pirates goal-posts
5' Play has been stopped as Pirates midfielder Motupa is down injured
8' Orlando Pirates: Bernard Morrison replaces Gift Motupa

15' It's still 0-0 here at the Orlando Stadium
19' City midfielder Seedat tries to play a through pass, but the ball goes out for a goal-kick
22' CHANCE! Ngoma's corner-kick finds his City teammate Matsi who heads the ball inches wide of the target
26' Morrison beats his marker and plays a low cross for his Pirates teammate Jele who places his shot wide of the target
30' The two sides are struggling to create clear-cut chances thus far
32' Mpho Matsi (Cape Town City FC) is cautioned.

34' City are awarded a free-kick in a promising area, but Ngoma places his effort over the Pirates goal-posts from the set-piece
36' Lebogang Manyama (Cape Town City FC) is cautioned.

38' City captain Manyama's deflected shot is gathered by Pirates keeper Mhlongo with ease
40' CHANCE! Makola sets up his Pirates teammate Norodien inside the City box and the latter forces keeper Walters into a low save
43' Pirates pressing City as the half-time break approaches
45' The fourth official has added one minute
45 + 1' The referee brings the first half to an end.

45 + 7' Morrison beats his mark and plays a cross for his Pirates teammate Ndoro who fails to direct his header towards the target
46' Orlando Pirates: Luvoyo Memela replaces Issa Sarr

46' The second half is underway
48' City midfielder Seedat unleashes a powerful low shot from range and Pirates keeper Mhlongo makes a good low save
56' GOOD CHANCE! The ball falls for Moseamedi who finds himself in a one-on-one situation with Mhlongo, but the City striker is denied by the keeper
63' City are looking dangerous on the counter-attack
66' Aubrey Ngoma (Cape Town City FC) is cautioned.

80' Ten minutes left on the clock
84' Pirates defender Chabalala's header is easily gathered by City keeper Walters
88' GOOD SAVE! Pirates keeper Mhlongo pulls off a good save to deny Manyama from a free-kick
90' The fourth official has added three minutes
90 + 4' The referee blows the whistle for Full Time. Pirates 0-0 City

Welcome to the live play-by-play for the ABSA Premiership 2016/17 match between Orlando Pirates and Cape Town City FC at Orlando Stadium.

A stubborn Cape Town City side held Orlando Pirates to a 0-0 draw in an Absa Premiership game played at the Orlando Stadium in Johannesburg on Tuesday evening.

The Buccaneers stays at the top of the league standings despite the draw, while City climb up to sixth spot on the log.

The visitors did most of the attacking in the opening stages of the league encounter, but they were unable to open the Bucs backline.

Aubrey Ngoma unleashed a powerful shot in the 21st minute, but the City midfielder's attempt was well-blocked by Pirates defender Justice Chabalala.

The best chance in the first-half went to Pirates winger Riyaad Norodien inside the City box, but his shot was well-saved by goalkeeper Shu-Aib Walters just before half-time.

The visitors began the second-half lively with Ebrahim Seedat forcing Pirates keeper Brighton Mhlongo into a low save from range in the 48th minute.

The shot-stopper then made two more good saves to deny City duo Lebogang Manyama and Judas Moseamedi towards the hour mark.

Although, both sides launched late attacks in search of a winning goal, they were unable to find it and they drew 0-0 on the night.

Orlando Pirates will chase a hat-trick of Absa Premiership wins when they host Cape Town City at Orlando Stadium on 20 September 2016, kick-off at 19h30.

Pirates picked up a second successive league win when they beat Ajax Cape Town 2-1 away on September 13.

The Buccaneers are placed first on the Absa Premiership log with six points from two matches.

Cape Town City suffered their first league defeat of the season when they were beaten 2-0 at Golden Arrows on September 14.

CTC are placed eighth on the Absa Premiership log with three points from two matches.

As Cape Town City is a brand new club, there is no previous head-to-head record between themselves and Pirates.