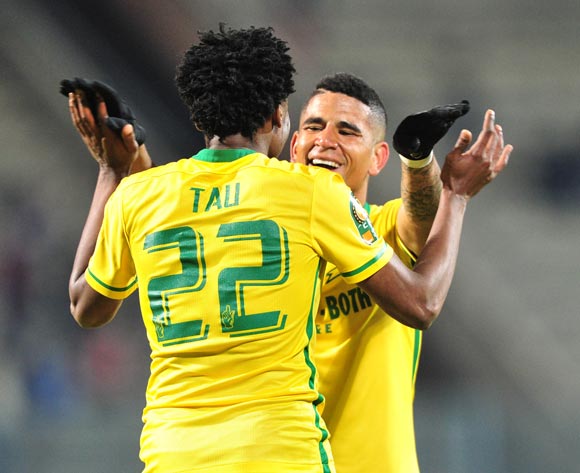 Percy Tau celebrates his goal with with Keagan Dolly of Mamelodi Sundowns during the CAF Champions League match between Mamelodi Sundowns and Zamalek at the Lucas Moripe Stadium in Pretoria, South Africa on July 27, 2016 ©Samuel Shivambu/BackpagePix

Welcome to the live play-by-play for the ABSA Premiership 2016/17 match between Mamelodi Sundowns and Cape Town City FC at Loftus Versfeld Stadium.

Welcome to the live play-by-play for the ABSA Premiership 2016/17 match between Mamelodi Sundowns and Cape Town City FC at Loftus Versfeld Stadium.

Mamelodi Sundowns suffered a 2-1 defeat to Cape Town City in their first Absa Premiership outing since being crowned African champions, at Loftus Stadium in Pretoria on Sunday afternoon.

A brace from Lebogang Manyama leading the newly formed PSL club to a famous win over what looked a tired Brazilians outfit, on a warm day in the South African capital.

Victory moves City up to fifth place on the log standings while Sundowns remain rooted to the bottom. The reigning league champions, though, have only played two games this season.

Manyama opened the scoring on 22 minutes with the City skipper latching onto a pull-back from Aubrey Ngoma to silence the home crowd.

Sundowns went in immediate search of the equaliser and created chances through Khama Billiat and Hlompho Kekana, but on both occasions Shu-Aib Walters was up to the task.

City should have extended their lead in the 43rd minute, but provider failed to turn scorer as Ngoma directed his attempt straight at Asavela Mbekile with the goal at his mercy.

Sundowns clawed their way back into the game through Thabo Nthethe in the 58th minute.' Mr Cool' latching onto Billiat's pin-point cross from a free-kick; nodding the ball past Walters who had no chance.

The visitors, though, were not to be denied all three points and after Lehlohonolo Majoro fluffed a glorious chance, up popped Manyama to complete his double in the 83rd minute. The former SuperSport United man stroking home the winner following good work from Mpho Matsi and Ngoma.

Mamelodi Sundowns will return to Absa Premiership action when they host Cape Town City at Loftus Versfeld Stadium on 30 October 2016, kick-off at 15h30.

Sundowns have played just one league match so far this season, drawing 0-0 away to Maritzburg United on September 14.

The Tshwane side’s long break between their first and second league matches is due to their reaching both the MTN8 and CAF Champions League finals.

The Brazilians are placed 16th on the Absa Premiership log with one point from as many matches.

The Citizens suffered their first home defeat and a second loss of the season when they were beaten 2-1 by Baroka FC on October 15.

The Mother City side has claimed two points from three away matches this season.

CTC are placed eighth on the Absa Premiership log with eight points from six matches.

This will be the first official clash between Mamelodi Sundowns and newly-formed Cape Town City.