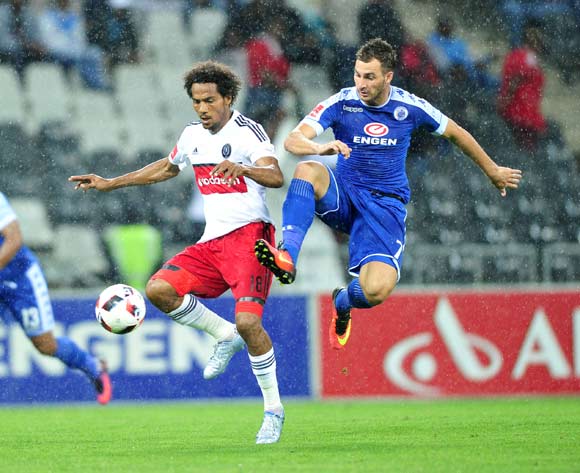 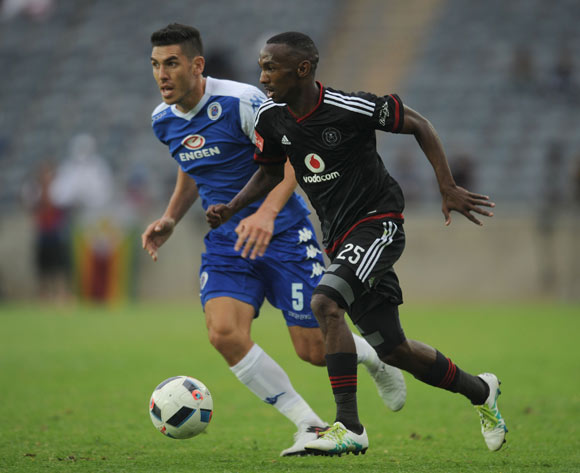 Welcome to the live play-by-play for the ABSA Premiership 2016/17 match between SuperSport Utd and Orlando Pirates at Lucas Moripe Stadium.

1' The match is underway!
2' SuperSport wear all blue, while Pirates in a change strip of red and white.
5' Boxall gets his head to a corner kick but his effort is off target. United looking dangerous from set pieces.
7' Phala with a low drive on target from a tight angle and Mhlongo has to make a sharp low save to push the ball away for corner.
11' Pirates with a great chance to open the scoring, Makola attempts to chip the 'keeper but Williams makes a fine save!
15' A quarter hour played, still goalless at a rainy Mbombela Stadium.
18' SuperSport Utd: Thabo Mnyamane replaces Cole Alexander

19' Grobler with a sight of goal from the 'D', he puts his left-footed shot wide of the mark.
23' Midway through the first half, United and Bucs locked at 0-0.
28' Rakhale plays a great through ball for Norodien, but his poke toward goal is weak and easily gathered by Williams.
33' Plenty of attacking intent from both sides, seems only a matter of time until we have the opening goal...
42' Ndoro beats Williams to a through ball and gets a shot on goal, but Gould is there to clear off the line.
43' Tendai Ndoro (Orlando Pirates) scores!

44' Rakhale crosses from the right, Ndoro forces the ball home to score his seventh league goal of the season.
45 + 1' The referee brings the first half to an end.

46' The second half is underway
50' Mhlongo unconvincing as he drops a corner kick, but his defence clears safely enough.
50' Jeremy Brockie (SuperSport Utd) is cautioned.

53' Letsholonyane fires at goal from a tight angle and it rebounds into the net off Mhlongo's arms to make it 1-1.
54' Michael Boxall (SuperSport Utd) scores!

62' Mnyamane's corner is flicked on at the near post and Mhlongo makes a sharp save.
63' Thuso Phala (SuperSport Utd) scores!

64' Mhlongo punches a cross straight to Phala, who fires into the top corner to make it 4-1.
74' Bradley Grobler (SuperSport Utd) scores!

75' Grobler provides an expert header to finish off Phala's cross and extend the lead to 5-1 - this is a real thrashing for Bucs now.
76' Orlando Pirates: Thamsanqa Gabuza replaces Riyaad Norodien

82' Morrison looks to pull one back for Pirates, but his effort is blocked by Daniels.
84' SuperSport Utd: Michael Morton replaces Reneilwe Letsholonyane

89' Brockie converts a penalty to make it 6-1, United are in dreamland.
90' Michael Morton (SuperSport Utd) is cautioned.

90 + 1' Ndoro with a chance to pull one back for Pirates, but his penalty is saved by Williams.
90 + 5' The referee blows the whistle for Full Time.

Welcome to the live play-by-play for the ABSA Premiership 2016/17 match between SuperSport Utd and Orlando Pirates at Lucas Moripe Stadium.

Orlando Pirates’ unbeaten run in the Absa Premiership was brought to a shuddering halt by an inspired SuperSport United at the Mbombela Stadium on Tuesday night.

Matsatsantsa racked up a stunning 6-1 victory on a rainy evening, with all of their goals arriving in the second half.

Pirates broke the deadlock late in the first half when Tendai Ndoro turned home a fine cross from Thabo Rakhale to make it 1-0 to the visitors and rack up his seventh league goal of the season.

SuperSport responded seven minutes into the second half, with Reneilwe Lethsolonyane exchanging passes with Jeremy Brockie before firing a shot from a tight angle which deflected into the net off the arms of Brighton Mhlongo.

And in the next four minutes defender Michael Boxall scored two easy close-range goals to make it 3-1, first redirecting a dragged shot by Letsholonyane in the 54th minute, before tapping home in the 56th after Pirates – and Mhlongo in particular – made a horrible mess of trying to defend a free kick.

Mhlongo’s night went from bad to worse in the 63rd minute when he punched a tame cross straight to Thuso Phala, who controlled the ball and promptly fired a shot into the top corner to extend Matsatsantsa’s lead to 4-1.

Bradley Grobler made it 5-1 in the 74th minute when he got on the end of a lofted cross from Phala and scored with an expertly placed header, while late in the game Brockie scored United’s sixth from a controversial penalty.

There was still time for Pirates to be awarded a penalty of their own in injury time, but when Ndoro was denied by a fine save from Williams it summed up a night the Buccaneers cannot forget quickly enough – but it will live long in the memory for United.

SuperSport to be tested by Pirates

SuperSport United’s fine form in the Absa Premiership will be put to the test when they host Orlando Pirates at Mbombela Stadium on 1 November 2016, kick-off at 19h30.

SuperSport have gone six league matches without defeat and claimed a 2-0 win away to Ajax Cape Town in their last outing.

The Tshwane side has claimed five points from three home matches this season.

Matsatsantsa are placed fourth on the Absa Premiership log with 12 points from seven matches.

Pirates played to a fourth successive draw in the league when they were held 0-0 at home by Kaizer Chiefs on October 29.

The Soweto side has claimed four points from two away matches this season.

The Buccaneers are placed sixth on the Absa Premiership log with 10 points from six matches.

In head-to-head stats, SuperSport and Pirates have met in 50 league matches since 1990.

The Buccaneers have 22 wins compared to 16 for Matsatsantsa, while 12 matches have been drawn.

SuperSport have won 10 of their 25 home league matches against Pirates suffering 10 defeats in the process.

Last season Matsatsantsa took four points off the Buccaneers, winning 1-0 in Tshwane before playing out a 2-2 draw in the return game in Soweto.