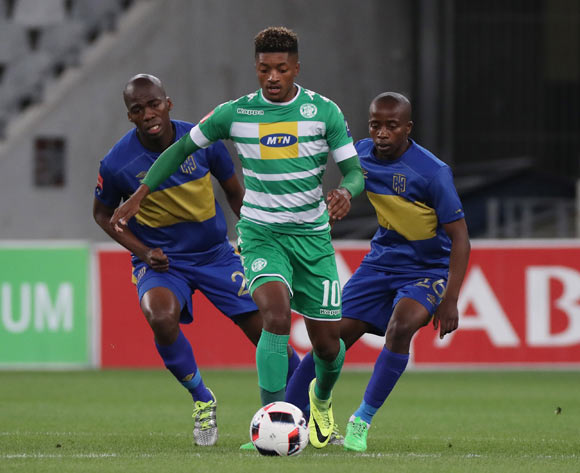 Welcome to the live play-by-play for the ABSA Premiership 2016/17 match between Cape Town City FC and Bloemfontein Celtic at Cape Town Stadium.

Welcome to the live play-by-play for the ABSA Premiership 2016/17 match between Cape Town City FC and Bloemfontein Celtic at Cape Town Stadium.

Celtic suffer yet another defeat

Bloemfontein Celtic suffered a second successive Absa Premiership defeat with the Free State side falling to a 1-0 loss against Cape Town City at Cape Town Stadium on Wednesday evening.

Lehlohonolo Majoro with the only goal of the game as City remain in fifth place on the log standings, Phunya Sele continue to fight at the wrong end of the table with the club in 13th spot as focus switches to the quarterfinals of the Telkom Knockout Cup.

Bloemfontein Celtic did all the early running, but were unable to covert a catalogue of chances as they were ultimately made to rue their failure to build on a positive start.

Atusaye Nyondo looked the most likely to score with the Malawi international unable to direct a pin-point cross by Dumisani Zuma on target in the 13th minute of the match.

Moeketsi Mvula was also guilty of squandering a chance soon after, before Nyondo saw his header attempt canon off the woodwork with 21 minutes on the clock.

The miss rather summed up Celtic's season thus far with Majoro finding the opener for the hosts two minutes later. The former Orlando Pirates striker well positioned to guide Wandisile Letlabika's attempted back-pass into the back of the net to the frustration of the Siwelele technical team.

Chances were few and far between for the rest of the half with the teams unable to build on what was a lively start to the clash.

Majoro had a chance to complete his double just short of the hour mark, but he was unable to direct his attempt on target having sneaked in between the Phunya Sele Sele defence.

Samora Motloung was rather untested throughout regulation time, but the City goal-minder who replaced Shu-Aib Walters in the starting eleven, stood firm in the third minute of stoppage time to deny Celtic on two occasions as the hosts held on for all three points.