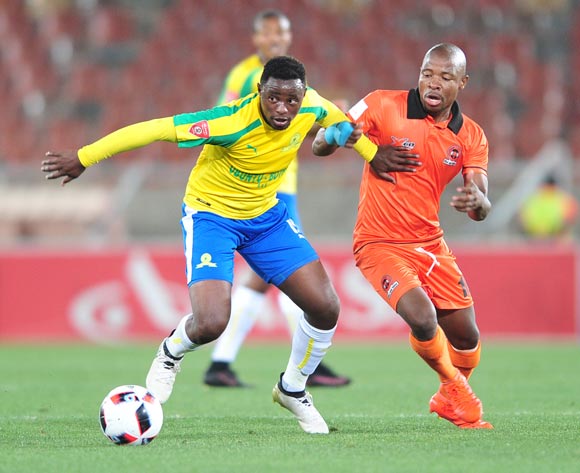 Lucky Mohomi of Supersport United challenged by Puleng Tlolane of Polokwane City during the Absa Premiership match between Polokwane City and Mamelodi Sundowns at Peter Mokab Stadium, November on the 02 November 2016 © Samuel Shivambu/BackpagePix 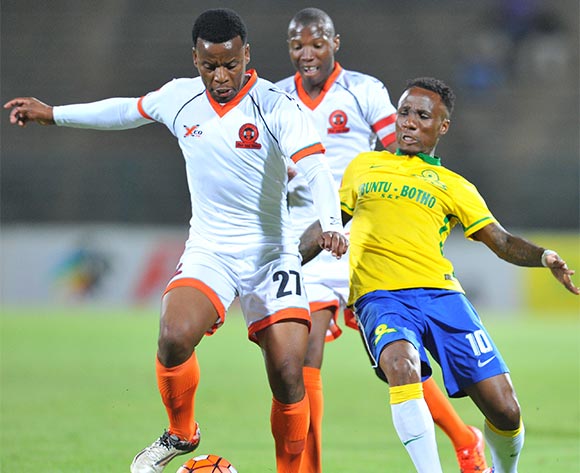 Welcome to the live play-by-play for the ABSA Premiership 2016/17 match between Polokwane City and Mamelodi Sundowns at Peter Mokaba Stadium.

1' The match is underway!
36' Thapelo Tshilo (Polokwane City) is cautioned.

Welcome to the live play-by-play for the ABSA Premiership 2016/17 match between Polokwane City and Mamelodi Sundowns at Peter Mokaba Stadium.

Polokwane City were not able to challenge Mamelodi Sundowns as they succumbed to a 2-0 defeat in their Absa Premiership match at the New Peter Mokaba Stadium on Wednesday night.

The Brazilians netted in the second stanza with goals coming from Percy Tau and Khama Billiat.

Although the first 10 minutes of the match was a cagey affair, the hosts were kept under pressure by the league champions as goalkeeper George Chigova became busy in his box.

In the 17th minute, the Brazilians were awarded a set piece and defender Tebogo Langerman's effort went inches wide of Chigova's left corner.

Kennedy Mweene was a spectator in the first 20 minutes until Puleng Tlolane's 24th minute strike which was collected by the Zambian net minder.

Pitso Mosimane was a disappointed man as his side failed to grab the lead despite enjoying the ball possession.

As early 48th minute, Sibusiso Vilakazi was set free on the left flank and made a dangerous entry into the penalty area only for Chigova to produce a fine save.

However, in the 55th minute, the defending champions broke the deadlock through Tau when he blasted home following a wonderful cross from Thapelo Morena, 1-0.

With nine minutes to go, Billiat made it 2-0 following a beautiful combination with Tau whose cross found the Zimbabwean unmarked in the box to easily bury the chance.

Despite their efforts to pull one back, the Citizens did not have a good game on the day and the Tshwane side walked away with their first three points in the 2016/17 campaign.

Polokwane City will look to extend their unbeaten run in the Absa Premiership when they host Mamelodi Sundowns at Peter Mokaba Stadium on 2 November 2016, kick-off at 19h30.

Polokwane have gone six league matches without defeat after drawing 2-2 away to Baroka FC on October 30.

The Limpopo side has claimed five points from three home matches this season.

Rise and Shine are placed seventh on the Absa Premiership log with 10 points from seven matches.

Sundowns suffered their first league defeat of the season when they were beaten 2-1 at home by Cape Town City on October 30.

The Tshwane side has played just two matches in the domestic championship due to their success in the CAF Champions League.

The Brazilians are placed 16th on the Absa Premiership log with one point from two matches.

In head-to-head stats, Sundowns and Polokwane have met in six league matches since 2013/14.

The Brazilians have claimed four wins compared to one for Rise and Shine, while one match has been drawn.

Polokwane have won one and lost two of their three previous home league matches against Sundowns.

Last season the Brazilians took four points off Rise and Shine, drawing 0-0 in Tshwane before claiming a 3-1 away win in Polokwane.

Sundowns have scored 12 of the 14 goals produced in six league matches between these teams.