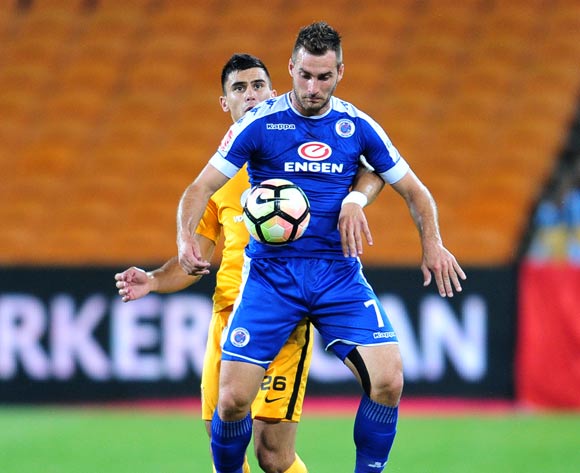 Welcome to the live play-by-play for the ABSA Premiership 2016/17 match between SuperSport Utd and Maritzburg Utd. at Lucas Moripe Stadium.

46' The second half is underway
52' Mandla Masango (SuperSport Utd) scores!

Welcome to the live play-by-play for the ABSA Premiership 2016/17 match between SuperSport Utd and Maritzburg Utd. at Lucas Moripe Stadium.

Mandla Masango’s first two goals for SuperSport United inspired them to a 4-1 win over Maritzburg United in an Absa Premiership match at Lucas Moripe Stadium on Wednesday.

Matsatsantsa trailed 1-0 at half time, but put in a brilliant second-half performance to claim a victory which puts them in third place on the log. The Team of Choice, who opened the scoring through a fine strike by Kurt Lentjies, remain in ninth.

Neither side really took control of the game in the early stages, but Maritzburg claimed the lead on the quarter hour mark through a great strike from Kurt Lentjies.

The Team of Choice midfielder latched onto a poor clearance from SuperSport’s Onismor Bhasera and ripped a great shot from the ‘D’ of the penalty area into the top corner, giving goalkeeper Reyaad Pieterse no chance whatsoever.

Matsatsantsa should have been level just two minutes later, with Jeremy Brockie rattling the crossbar with a toe-poke shot, while the rebound fell kindly for Thabo Mnyamane but he was unable to direct an effort on target.

The hosts blew another great chance to equalise on 34 minutes, with Bhasera providing a fine cross from the left which Kingston Nkhatha put wide of the target when it looked easier to score.

SuperSport had to wait until seven minutes into the second half to bring themselves level, with a beautiful passing move around the box ending with Mandla Masango poking the ball home from close range for his first United goal.

And the former Kaizer Chiefs winger’s second arrived less than a minute later, with a cross from the right flank missed by Reneilwe Letsholonyane, only for Masango to arrive late and fire home a low, left-footed shot to make it 2-1 to the hosts.

Just before the hour mark it was 3-1, with a cushioned header from Mnyamane setting up Nkhatha to score with a spectacular, acrobatic volley. The Zimbabwean’s strike was SuperSport’s third goal in the space of seven minutes.

The Tshwane side soon racked up a fourth goal, with Mnyamane’s cross from left cleverly dummied by Nkhatha, allowing Brockie to finish from close range and make it 4-1.

Both teams will return to Absa Premiership action this weekend: SuperSport will be away to Highlands Park on Saturday evening, while Maritzburg will host Free State Stars on Saturday afternoon.

SuperSport United will look to keep up their Absa Premiership title push when they host Maritzburg United at Lucas Moripe Stadium on 22 February 2017, kick-off at 19h30.

SuperSport extended their unbeaten run in the league to 15 matches with a goalless draw at Free State Stars on February 15.

The Tshwane side has claimed 17 points from seven home matches this season.

Matsatsantsa are placed fourth on the Absa Premiership log with 29 points from 16 matches.

Maritzburg saw their winless streak in the league extended to four matches with a 2-1 loss at home to Kaizer Chiefs on February 11.

The KwaZulu-Natal side has claimed 12 points from eight away matches this season.

The Team of Choice is placed ninth on the Absa Premiership log with 20 points from 17 matches.

In head-to-head stats, SuperSport and Maritzburg have met in 21 league matches since 2005/06.

Matsatsantsa have 11 wins compared to two for the Team of Choice, while eight matches have been drawn.

SuperSport have won five of their 10 home league matches against Maritzburg, suffering two defeats in the process.

Since a 7-0 win over Maritzburg in 2011/12, SuperSport have scored just nine goals in 10 league matches against the KwaZulu-Natal side.