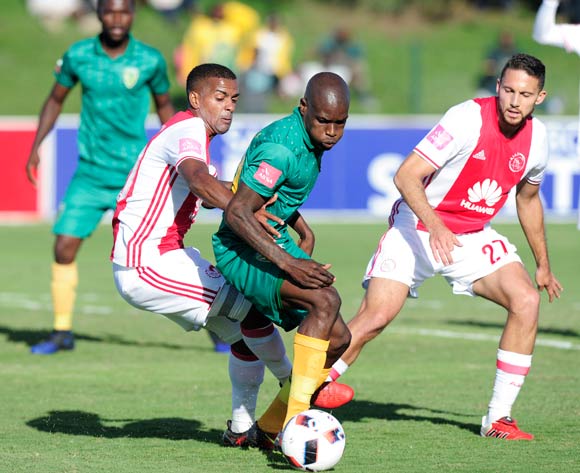 Lerato Lamola of Lamontville Golden Arrows tries to prevent Erwin Isaacs of Ajax Cape Town F.C. of getting to the ball during the Absa Premiership 2016/17 game between Golden Arrows and Ajax Cape Town at Prince Magogo Stadium in Durban, KwaZulu-Natal on 15 April 2017 © Gerhard Duraan/BackpagePix 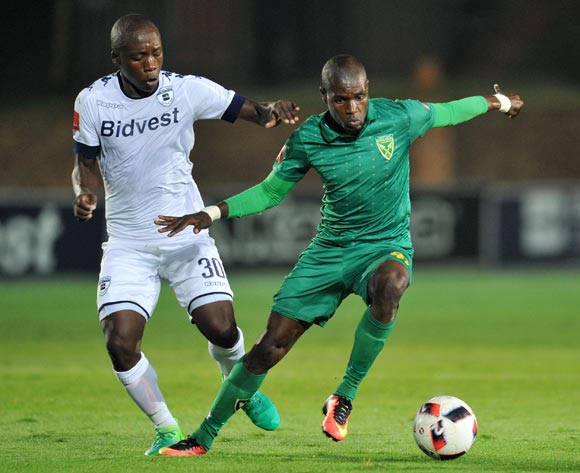 Welcome to the live play-by-play for the ABSA Premiership 2016/17 match between Golden Arrows and Ajax Cape Town at Princess Magogo Stadium.

Welcome to the live play-by-play for the ABSA Premiership 2016/17 match between Golden Arrows and Ajax Cape Town at Princess Magogo Stadium.

Ajax Cape Town came up against a determined Nkosingiphile Gumede in the Golden Arrows goal as Stanley Menzo's men were forced to settle for a 1-1 draw at the Princess Magogo Stadium in KwaMashu, on Saturday afternoon.

Eager to record back-to-back Absa Premiership wins for the first time this year, the Urban Warriors came out flying and had the ball in the back of the net as early as the sixth minute.

Mark Mayambela looked to have scored a clear goal, but the linesman's flag was raised for offside - a contentious decision with replays suggesting otherwise.

Arrows, though, were ready to ride crest of the wave and hit the front with 13 minutes on the clock. Nkanyiso Mngwengwe on hand to hammer home from close range after Jody February failed to catch the ball from a corner-kick.

The Urban Warriors continued to boss proceedings, but were finding in difficult to beat a determined Gumede. The goal-minder on hand to deny Mayambela and Thasbo Mosadi before the break.

Playing with the wind at their backs in the second stanza, the visitors looked even more dangerous in attack with Roscoe Pietersen and Mosadi going close in quick succession.

With the burly Nathan Paulse and Nxumalo in attack, it would prove only a matter of time for the Urban Warriors with the latter finally leveling matters in the 77th minute. The KwaZulu-Natal born attacker nodding in at the far post from a Mosadi corner-kick.

Ajax Cape Town pressed forward in search of the winner, but were unable to find a second as they had to settle for a point; moving up to 10th in the process. Abafana Bes'thende remain sixth.

Arrows look to bounce back against Ajax

Golden Arrows will look to bounce back from a midweek defeat in the Absa Premiership when they host Ajax Cape Town at Prince Magogo Stadium on 15 April 2017, kick-off at 15h00.

Arrows suffered a second loss from their last three league matches when they were beaten 3-0 at Bidvest Wits on April 11.

The Durban side has claimed 18 points from 11 home matches this season.

Abafana Bes’thende are placed sixth on the Absa Premiership log with 30 points from 23 matches.

Ajax claimed their first win in any competition in 2017 when they defeated Highlands Park 1-0 at home on April 12.

The Cape Town side has claimed 10 points from 11 away matches this season.

The Urban Warriors are placed 11th on the Absa Premiership log with 25 points from 23 matches.

The Urban Warriors have 12 wins compared to seven for Abafana Bes’thende, while 12 matches have been drawn.

Arrows have won six of their 15 home league matches against Ajax, suffering four defeats in the process.

When the teams met earlier this season, the Urban Warriors claimed a 1-0 home win in Cape Town.

Ajax are unbeaten in their last six league matches against Arrows.