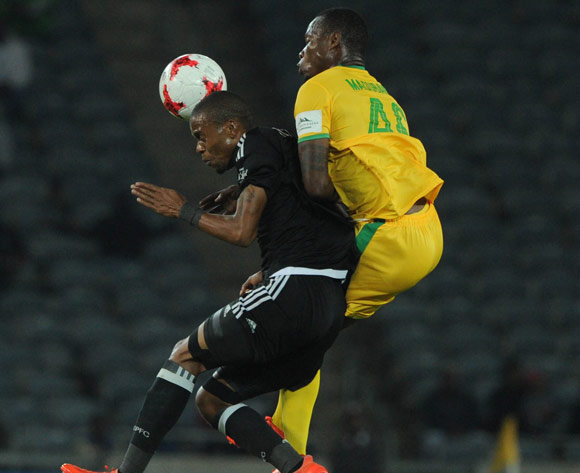 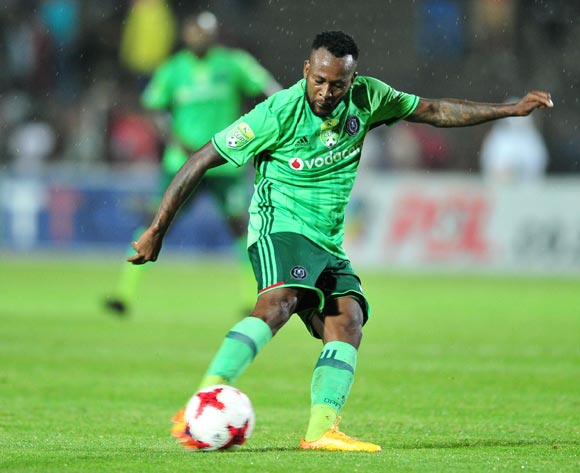 Mpho Makola of Orlando Pirates lines up a shot to score his teams first goal during the 2017 Nedbank Cup match between Free State Stars and Orlando Pirates at the James Motlatsi Stadium, South Africa on 08 April 2017 ©Samuel Shivambu/BackpagePix

Welcome to the live play-by-play for the ABSA Premiership 2016/17 match between Orlando Pirates and Baroka FC at Orlando Stadium.

46' The second half is underway
61' Matome Kgoetyane (Baroka FC) is cautioned.

Welcome to the live play-by-play for the ABSA Premiership 2016/17 match between Orlando Pirates and Baroka FC at Orlando Stadium.

Orlando Pirates were fortunate to salvage a 1-1 draw in their Absa Premiership match with Baroka FC at Orlando Stadium on Wednesday evening.

Bakgaga looked to be on course for a deserved three points when Sepana Victor Letsoalo put them ahead late on, but a dramatic equaliser right at the death from Issa Sarr saw the Buccaneers avoid defeat.

Baroka started brightly and very nearly caught Pirates napping at the back in the opening stages, especially through a deflected cross from Mxolisi Kunene which kissed the hosts’ crossbar and bounced away to safety.

On 12 minutes a shot direct from a free kick by Baroka’s Jose Garcia forced an acrobatic save out of Pirates’ goalkeeper Siyabonga Mpontshane, as the Limpopo side continued to look the likelier scorers.

Yet on 27 minutes the Buccaneers blew a great chance to open their account, with Thabo Rakhale’s cross picking out Tendai Ndoro, who had an unguarded goal in front of him, but defender Shaku Olaleng put his body on the line to make a heroic block at point-blank range.

Baroka had the last notable effort of the half, with Kunene letting fly from long range in the 44th minute to force Mpontshane into a sharp save to his left. The interval saw the teams locked at 0-0.

Bucs made a double change at the start of the second half, sending on Thabo Qalinge and Thamsanqa Gabuza in place of Mpho Makola and Ndoro, yet they continued to look unconvincing in attack.

Only after the hour mark did the hosts begin to find some penetration: on 64 minutes Patrick Phungwayo squeezed a good pass to Gabuza, who was denied by a fine save at close range from Oscarine Masuluke.

With just under 20 minutes to play Baroka nearly broke the deadlock through substitute Sepana Letsoalo, whose long-range shot looked destined for the back of the net until Mpontshane pulled off an outstanding save.

The Bucs goalkeeper had been perhaps his team’s best player through the match, but on 78 minutes he allowed a shot from Letsoalo to fly into the net off his arms - the effort was well-struck, but Mpontshane should have saved it relatively comfortably.

Luckily for the gloves-man his error was not the decisive moment of the match, with Pirates drawing level in the final minute of injury time when a right-flank cross found the head of Issa Sarr, who powered an effort beyond the reach of Masuluke to see the game end 1-1.

Orlando Pirates will target three Absa Premiership points against Baroka FC at the Orlando Stadium on 26 April 2017, kick-off at 19h30.

Pirates played to their 12th league draw of the season as they were held 0-0 at Highlands Park on April 15.

The Soweto side has claimed 15 points from 11 home matches this season.

The Buccaneers are placed ninth on the Absa Premiership log with 27 points from 23 matches.

Baroka saw their four-game unbeaten run come to an end as they were beaten 3-1 at Maritzburg United on April 14.

The Limpopo side has claimed 11 points from as many away matches this season.

Bakgaga are placed 16th on the Absa Premiership log with 21 points from 24 matches.

In head-to-head stats, Pirates and Baroka have met in just one previous top flight league match.