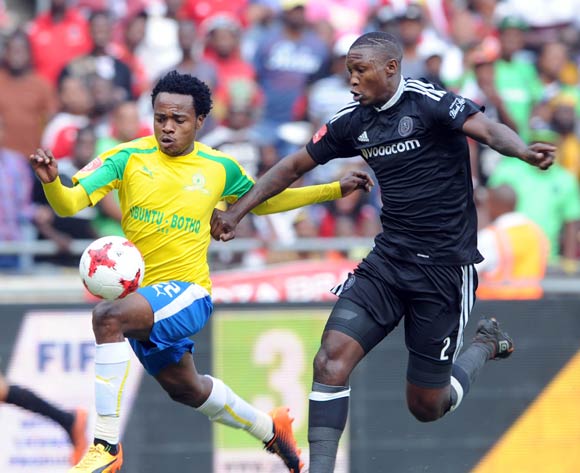 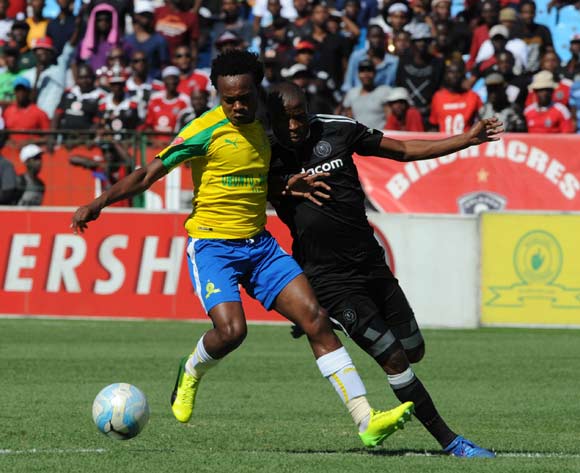 Welcome to the live play-by-play for the ABSA Premiership 2016/17 match between Orlando Pirates and Mamelodi Sundowns at Orlando Stadium.

45' The second half is underway
46' Thabo Qalinge (Orlando Pirates) is cautioned.

Welcome to the live play-by-play for the ABSA Premiership 2016/17 match between Orlando Pirates and Mamelodi Sundowns at Orlando Stadium.

Orlando Pirates succumbed to a 2-0 loss against Mamelodi Sundowns at Orlando Stadium on Sunday afternoon in the Absa Premiership.

Two goals through Khama Billiat and Yannick Zakri downed Kjell Jonevret's men as they were condemned to the 10th spot on the log table with 31 points.

The Soweto giants started better than their hosts and Thabo Rakhale tried a shot from a distance in the 17th minute, but goalkeeper Denis Onyango collected comfortably.

In the 21st minute, Mzikayise Mashaba was fouled in the penalty area by Happy Jele as the Brazilians protested for a spot kick, but the referee waved play on.

However, four minutes later, Billiat broke the deadlock after they won the ball in the middle of the park: a cross from Zakri deflected off Issa Sarr only for the Zimbabwean to head home.

Exactly on the half hour mark, Ayanda Gcaba's attempt in the box nearly caught Sundowns off guard, but produced a brilliant save from Onyango following a corner by Rakhale.

With 10 minutes to go, Onyango was once again called on to produce a brilliant save to deny Oupa Manyisa from close resulting from a clever cross by Thabo Qalinge.

It was an end-to-end affair in the last five minutes and Jackson Mabokgwane cane out to deny Percy Tau. It was 1-0 at the interval.

Three minutes into the second stanza, Zakri made it 2-0 for the visitors after he was set up by Themba Zwane and the Cote d'Ivoirean beat Mabokgwane on his right corner.

The hosts tried to unlock Sundowns’ defence by pushing forward, however, substitute Mpho Makola's effort was dealt with by the uncompromising Onyango in the 60th minute.

Jonevret introduced Tendai Ndoro, Dove Wome and Makola to find an opening goal, yet Ndoro failed to keep his header on target in the 77th minute as it flew over the crossbar.

In the last three minutes of the tie, Billiat came close to bagging his brace when he unleashed a powerful shot on the edge of the area, but he was denied by the woodwork.

In the wake of the victory, Pitso Mosimane's men remain placed at number two on the log table with 54 points from 27 matches.

Orlando Pirates and Mamelodi Sundowns will meet in a battle of Absa Premiership heavyweights at Orlando Stadium on 7 May 2017, kick-off at 15h00.

Pirates suffered their seventh league loss of the season when they went down 1-0 away to Bidvest Wits on May 4.

The Soweto side has claimed 19 points from 13 home matches this season.

The Buccaneers are placed eighth on the Absa Premiership log with 31 points from 26 matches.

Sundowns have picked up just one point from their last two league matches after they were held 2-2 at home by Platinum Stars on May 4.

The Tshwane side has claimed 23 points from 13 away matches this season.

The Brazilians are placed second on the Absa Premiership log with 51 points from 26 matches.

In head-to-head stats, Sundowns and Pirates have met in 64 league matches since 1985.

The Brazilians have 28 wins compared to 19 for the Buccaneers, while 17 matches have been drawn.

Pirates have won 10 of their 31 home league matches against Sundowns, suffering 14 defeats in the process.

When the teams met earlier this season, the Brazilians claimed a massive 6-0 home win in Tshwane.

Pirates have not won a home league match against ‘Downs since the 2010/11 season.