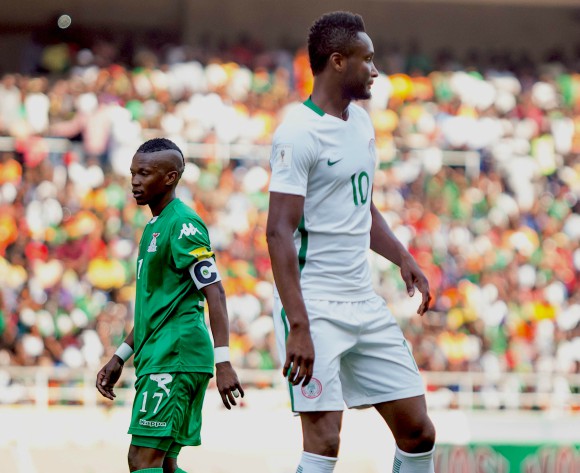 Stanley Ratifo's 90th minute goal guided Mozambique to a 1-0 win over Zambia in a 2019 Africa Cup of Nations qualifier at the Levy Mwanawasa Stadium in Ndola on Saturday afternoon.

Victory, their first over the Copper Bullets, moving them top of Group K with the Mambas off to the perfect start as they aim to make a return to Africa's premier cup competition.

The hosts dominated proceedings for most of the 90 with Stophila Sunzu, Rainford Kalaba and Fwayo Tembo all squandering early chances to put the 2012 champions in front.

Elias Pelembe was also at fault for the Mambas with the Bidvest Wits winger seeing his shot wide in the 27th minute despite being unmarked inside the Zambian penalty area.

Despite chances at either end of the pitch, the first half would end goalless.

Chipolopolo came out firing following the interval and were unfortunate not to take the lead in the 55th minute. Poor defending by Mozambique letting in Kondwani Mtonga who guided his attempt onto the woodwork.

The lucky escape breathed life into the visitors who held their own for most of the encounter. Having found their rhythm their persistence paid off as Ratifo bagged a 90th minute winner.

The German-based forward guiding the ball past Kennedy Mweene from a tight angle as Mozambique made history to send shock-waves through a nation, who just celebrated the achievements of the U20 side at the 2017 FIFA U20 World Cup in South Korea.

Mambas out to break Chipolopolo curse in Ndola

Mozambique will be eyeing their first win over Southern African rivals Zambia when the two nations do battle in a 2019 Africa Cup of Nations qualifier this Saturday.

Kick-off at the Levy Mwanawasa Stadium in Ndola is scheduled for 15h00 CAT.

According to FIFA.com, Chipolopolo have yet to taste defeat to Os Mambas in 20 previous meetings. The 2012 champions winning 16 of those encounters - scoring 40 goals - with four matches ending all square.

Zambia are desperate to not only build on that impressive record, but also on returning to Africa's premier cup competition having missed out on qualifying for the 2017 edition in Gabon.

In total, the Copper Bullets have qualified for 17 AFCON tournaments - famously winning the competition under the tutelage of Herve Renard five years ago.

Zambia held Gabon to a goalless draw in a friendly match played in Libreville this past weekend with Wedson Nyirenda’s troops now setting their sights on Mozambique.

The influential Rainford Kalaba will captain the side with fellow veterans Kennedy Mweene and Collins Mbesuma also included in the squad.

Mozambique, who have qualified for four AFCON tournaments exiting each of those competitions in the group stages, will be aiming to qualify for their first showpiece since Angola 2010.