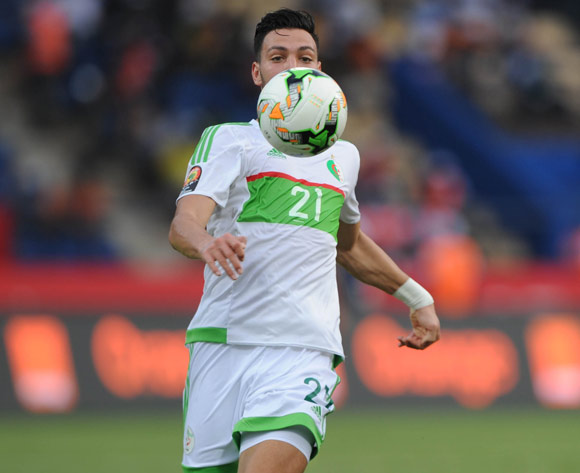 Amir Bensebaini of Algeria during the Afcon Group B match between Algeria and Tunisia on the 19 January 2017 at Franceville Stadium, Gabon Pic Sydney Mahlangu/ BackpagePix

Libya will be slight favourites to book their ticket to the 2018 African Nations Championship (CHAN) tournament heading into their second-leg Northern Zone qualifier against Algeria next week.

This following a 2-1 win over their North African rivals at Stade Mohamed Hamlaoui in Constantine on Saturday evening.

The Fennec Foxes opened the scoring as early as the first minute with Oussama Darfalou finding the back of the net after just 31 seconds of play.

The hosts off to the perfect start, but their lead would only last five minutes as Muaid Ellafi pulled the visitors level following a defensive mistake.

Libya, who won the CHAN title on South African soil three years ago, would take the lead three minutes after the break with Ellafi completing his brace as The Mediterranean Knights held on for a memorable win.

The second-leg will take place in Sfax, Tunisia next week with political turmoil forcing Libya to take their home matches elsewhere.
Preview

Former African Nations Championship (CHAN) champions Libya will go head-to-head with Algeria for a place at the 2018 edition, with the first-leg to take place at
Stade Mohamed Hamlaoui in Constantine on Saturday.

The Fennec Foxes have qualified for the continental competition on one previous occasion, ending fourth at the 2011 tournament hosted in Sudan.

As for Libya, the 2014 champions who lifted the title following victory over Ghana in the final, will be hoping to book their place at a third showpiece having missed out on qualification for the 2016 edition in Rwanda.

Whoever comes out top over two legs will automatically book their place at the 2018 showpiece to be hosted in Kenya . Egypt and Morocco cross-swords in the other Northern Zone clash.

In 18 previous meetings, Algeria have come out tops on 14 previous occasions with Libya winning two matches against this weekend's opponents.

The second-leg will take place in Sfax, Tunisia next week with political turmoil forcing Libya to take their home matches elsewhere.