Arnaldo Caminho of Mozambique challenged by Sarivahy Vombola of Madagascar during the 2017 Cosafa Castle Cup match between Mozambique and Madagascar at Morulen Stadium, Rustenburg South Africa on 30 June 2017 ©Samuel Shivambu/BackpagePix 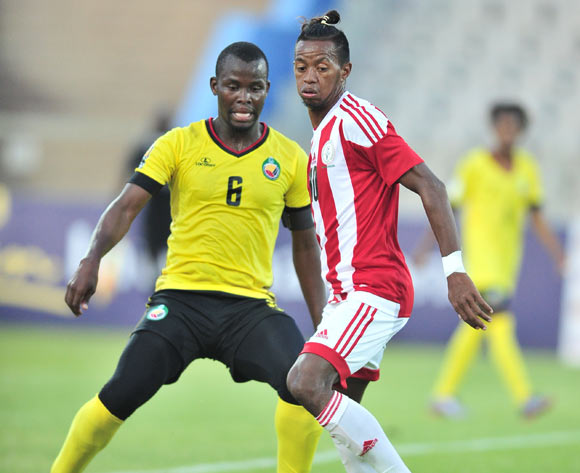 Andriamirado Andrianarimanana of Madagascar challenged by Abilio Moucuona of Mozambique during the 2017 Cosafa Castle Cup match between Mozambique and Madagascar at Morulen Stadium, Rustenburg South Africa on 30 June 2017 ©Samuel Shivambu/BackpagePix

Madagascar and Mozambique played to a 2-2 draw in the first leg of their 2018 African Nations Championship (CHAN) qualifier in Antananarivo on Sunday afternoon.

The teams’ first clash in the Southern Zone’s second round sets up the tie perfectly for the return leg in Maputo next weekend.

The Mambas got off to a flying start and claimed the lead early on through Salomao Mandlane, but the half ended 1-1 when Madagascar’s Njiva Rakotoarimalala scored an equaliser just before the break.

And Barea claimed the lead for the first time early in the second stanza when Rakotoarimalala netted a second in the 51st minute.

However, parity was soon restored when Mozambique’s Manuel Fernandes made it 2-2, giving the visitors a valuable second away goal ahead of next weekend’s second leg.

The aggregate winner of the tie will face either Mauritius or Angola in the final phase of qualification.

Madagascar will welcome Mozambique to Antananarivo for the first leg of their 2018 African Nations Championship (CHAN) Southern Zone, second round qualifier on Sunday afternoon at the Mahamasina Municipal Stadium.

Madagascar, known as Barea, have never qualified for the CHAN finals and last played in the preliminaries for the 2011 tournament, opting out of the 2014 and 2016 editions entirely.

The Island team was last in action in the 2017 Cosafa Cup, where they went unbeaten through the group stage and were somewhat unlucky not to progress through to the quarterfinals - eventual champions Zimbabwe finished ahead of them on goal difference.

Mozambique, known as the Mambas, have qualified for just one CHAN tournament, the 2014 edition in South Africa where they were eliminated in the group stage. Their attempt to qualify for the 2016 finals ended in the first round when they were beaten 4-1 on aggregate by Zambia.

The Mambas were also in action at the 2017 Cosafa Cup, but they went out of the tournament after losing two of their three group stage matches.

Madagascar and Mozambique have met in five previous matches, according to FIFA statistics, with the Mambas claiming three wins compared to one for Barea. The teams’ most recent clash was in the group stage of the 2017 Cosafa Cup, with Madagascar claiming a 4-1 win in Rustenburg on June 30.

The second leg will be staged in Maputo next weekend. The aggregate winners will face either Mauritius or Angola in the third round.