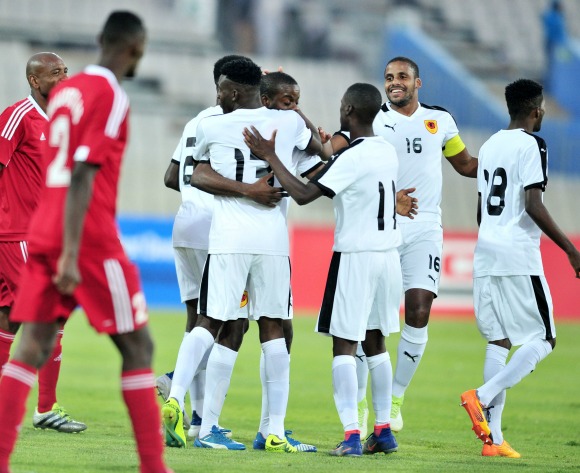 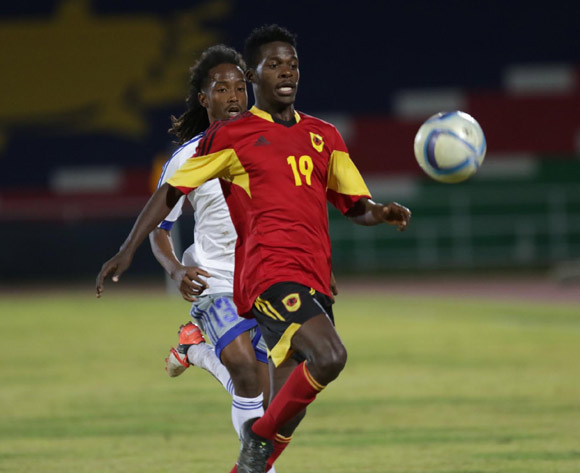 Paulino Nguendelamba of Angola in action while Jonathan Pierre Bru of Mauritius looks on during their Cosafa Castle Cup match in Windhoek on 16 June 2016. Photo: BackpagePix

Angola overcame Mauritius 1-0 in the 2017 COSAFA Cup Group A match at the Moruleng Stadium in Moruleng, South Africa on Sunday.

The narrow victory takes Angola to position two on the Group A standings with three points, while Mauritius are placed third without a single point.

Palancas Negras got off to the best possible start as they took the lead just four minutes into the second encounter of Group A.

Quibeto, whose full name is Augusto Antonio Domingos, hit the back of the net with a decent finish to make it 1-0 to Angola.

However, Angola were forced to make an early change in the 25th minute when Mafumana went down injured and he was replaced by Eduardo Leite.

Five minutes later, the goalscorer Quibeto also went down injured and he was replaced by Justo as Angola coach Beto Bianchi made his second change.

The forward nearly made an immediate impact in the 41st minute, but his effort hit the post with Mauritius goalkeeper Kevin Jean-Louis beaten.

Mauritius midfielder Kevin Perticots tried to create a goalscoring opportunity in the closing stages of the first-half, but the Angola defence did well to stop him.

Angola were deservedly leading 1-0 during the half-time thanks to Quibeto's early goal following a relatively quiet first-half in Moruleng.

Emmanuel Vincent-Jean tried to grab an early goal for the M Club just 11 minutes into the second-half, but Angola keeper Neblu Da Cruz denied him.

Jesson Laval Rungassamy was introduced for Marco Dorza in the 61st minute by the Mauritius technical team as the M Club looked to level matters.

Estevao, whose full name is Ricardo Job, was keeping the M Club defence busy down the right-hand side of the Palancas Negras attack.

But the momentum was Mauritius with less than 10 minutes left on the clock as they pushed more players upfront - looking to grab a late equalizing goal.

Da Cruz and the Angolan defence stood firm in the closing stages of the encounter and ultimately, Palancas Negras ran out 1-0 winners.

Mauritius and Angola will face off in the 2017 COSAFA Cup Group A match at the Moruleng Stadium in Moruleng, South Africa on Sunday.

Mauritius have never won the COSAFA Cup and their best result in the tournament was when they defeated South Africa in 2004.

Nicknamed Club M, Mauritius are under the guidance of Joe Tshupula, who has been charge of the national team since 2015.

Club M finished third in Group B in last year's COSAFA Cup and as a result, they failed to advance to the quarter-finals in Namibia.

Meanwhile, Angola are one of the giants of Southern African football having won the COSAFA Cup three times (in 1999, 2001 and 2004).

Last year, Palancas Negras failed to advance to the quarter-finals stages of the COSAFA Cup. They finished at the bottom of Group B in Namibia.

Group A also features Tanzania and Malawi. The two nations will meet at the Moruleng Stadium on Sunday before the clash between Mauritius and Angola.