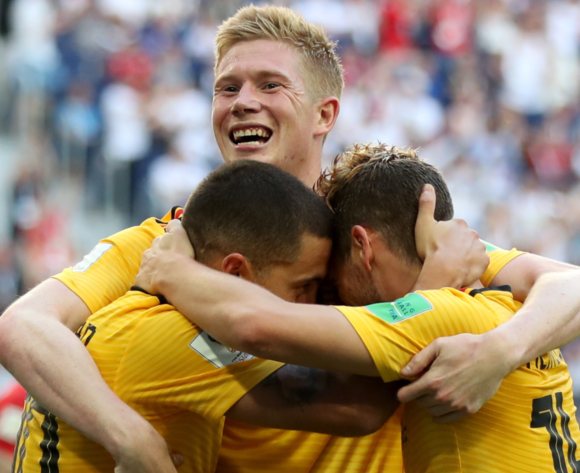 Jamie Vardy (R) of England and Dedryck Boyata of Belgium in action during the FIFA World Cup 2018 group G preliminary round soccer match between England and Belgium in Kaliningrad, Russia, 28 June 2018.

Welcome to the live play-by-play for the 2018 FIFA World Cup - Russia match between Belgium and England at Saint Petersburg Stadium.

46' The second half is underway
52' John Stones (England) is cautioned.

Welcome to the live play-by-play for the 2018 FIFA World Cup - Russia match between Belgium and England at Saint Petersburg Stadium.

Belgium claimed the bronze medals at the 2018 World Cup after they defeated England 2-0 in the third-place playoff at the Krestovsky Stadium in Saint Petersburg on Saturday.

The ‘Red Devils’ scored their goals through Thomas Meuneir and Eden Hazard to claim the bronze medals and secure a second win over the ‘Three Lions’ at Russia 2018.

Belgium got off to a flyer and claimed the lead in the fourth minute. Romelu Lukaku’s fine pass gave Nacer Chadli the space to cross from the left and pick out Thomas Meunier, who got ahead of Danny Rose and stabbed the ball home from close range.

England took their time to establish themselves in the match, but midway through the first half they created a good chance to equalise, as Raheem Sterling teed up Harry Kane on the edge of the box, but the captain skewed his shot wide of the mark.

The ‘Red Devils’ suffered an injury blow late in the half as Nacer Chadli succumbed to what appeared to be a hamstring strain and was replaced by veteran Thomas Vermaelen, while the ‘Three Lions’ opted for a double change at the interval and introduced both Marcus Rashford and Jesse Lingard.

England looked the more enterprising team through the second half and in the 70th minute only a great piece of defending denied them an equaliser: Eric Dier went clean through on goal and chipped the ball over Thibaut Courtois, only for Toby Alderweireld to make a brilliant clearance off the goal line.

Ten minutes later Belgium put together a superb passing move which ended with Meunier looking to score his second goal, but his stinging volley was well saved by goalkeeper Jordan Pickford to keep England in contention.

Yet the ‘Red Devils’ were not to be denied: Kevin De Bruyne put Eden Hazard in on goal and the forward out-sprinted Phil Jones before sliding a low shot past the ‘keeper to make it 2-0 and seal a third-place finish.

A third place finish at the 2018 World Cup will be up for grabs when Belgium and England meet at the Krestovsky Stadium in Saint Petersburg on Saturday, July 14, kick-off at 16h00 CAT.

Belgium’s hopes of a first World Cup title were dashed on Tuesday night when they were beaten 1-0 by France. Samuel Umtiti’s header early in the second half was enough to send the ‘Red Devils’ out of the tournament.

It’s a huge missed opportunity for coach Roberto Martinez and the country’s ‘golden generation’, who looked to have the talent to go all the way and claim the trophy, especially in the wake of their impressive win over Brazil in the quarterfinals.

England’s momentum seemed to grow through the tournament and they were the favourites for their semifinal against Croatia on Wednesday, but Gareth Southgate’s men seemed to run out of steam and self-belief as they lost 2-1 after extra time.

Nonetheless, given the relatively low expectations surrounding the ‘Three Lions’ heading into the tournament, they can still consider it a successful showing – even through the weight of their 1966 triumph remains as a burden.

Given that the third-place playoff is generally viewed as the game no one wants to play, it would be no surprise if both teams opted for plenty of changes from their semifinal line-ups.

That would mean we see the likes of Youri Tielemans, Thorgan Hazard and Michy Batshuayi for Belgium, while England could field players such as Gary Cahill, Trent Alexander-Arnold, Ruben Loftus-Cheek, Jamie Vardy, Marcus Rashford and Danny Welbeck.

In head-to-head terms, Belgium and England have met in seven 22 matches, according to FIFA’s statistics database. The ‘Three Lions’ have claimed 15 wins compared to just two for the ‘Red Devils’, while five games have been drawn.

The teams met earlier in this World Cup, with their Group G game in Kaliningrad on June 28 ending in a 1-0 win for Belgium thanks to a fine strike from Adnan Januzaj.