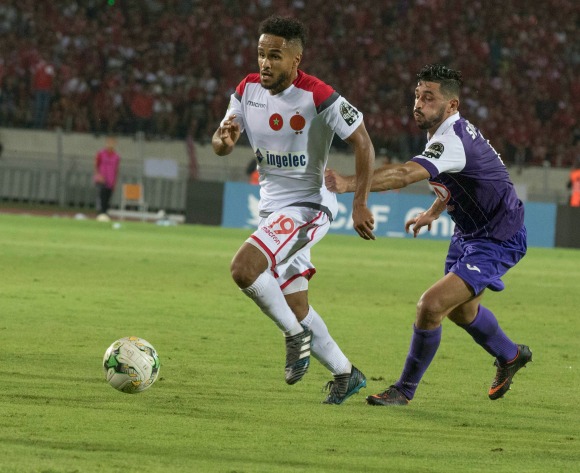 Wydad Casablanca secured a 5-2 victory over ASEC Mimosas in the 2018/19 CAF Champions League Group A match at the Prince Moulay Abdellah Stadium in Morocco on Friday.

The win saw the Moroccan outfit topple Guinean side Horoya atop the Group A standings after brushing aside the Ivorian giants.

The hosts pushed for an early goal and they managed to find the back of the net through Ismail El Haddad 16 minutes into the match.

The 28-year-old striker beat Mimosas goalkeeper Mamadou Sylla to make it 1-0 to Wydad with Walid El Karti grabbing an assist.

The Black and Yellows had to find the equalizing goal with Burkina Faso striker Abdoul Tapsoba leading their attack.

Parity was restored on the stroke of half-time and Tapsoba was involved as he grabbed an assist with Wonlo Coulibaly scoring to make it 1-1.

The score was 1-1 between Wydad and Mimosas at the interval.

A second-half which was dominated by Wydad Al-Ouma followed as they restored their lead three minutes after the restart.

Michael Babatunde was the man, who hit the back of the net to make it 2-1 to Wydad much to the light of the home crowd.

It was soon 3-1 to Wydad when second-half substitute Zouheir El-Moutaraji beat Sylla four minutes before hour-mark.

The momentum was with the hosts and they grabbed two late goals through El Karti and Aouk Badi to make it 5-1 to Wydad.

However, the visitors managed to grab a late consolation goal through Salif Bagate to make it 5-2 with five minutes left on the clock.

Wydad Casablanca will face off with ASEC Mimosas in the 2018/19 CAF Champions League Group A match on Friday.

The encounter will take place at the Prince Moulay Abdellah Stadium in the Moroccan city of Rabat.

Wydad reached the group stage after edging out Senegalese outfit ASC Diaraf in the first round late last month.

The tie ended in a 3-3 draw on aggregate and the Moroccan Botola League club won on the away goals rule.

Liberian striker Willam Jebor, who netted against Diaraf, will look to score and help his side beat Mimosas.

Meanwhile, Mimosas booked their place in the last 16 after eliminating Malian club Stade Malien in December 2018.

The Côte d'Ivoire Ligue 1 champions beat Stade Malien 2-0 on aggregate - winning 1-0 both home and away.

Mimosas will look to Burkina Faso striker Ahmed Toure, who is a reliable goalscorer for the team.

Senegalese referee Maguette N'Diaye will officiate the match between Wydad and Mimosas.