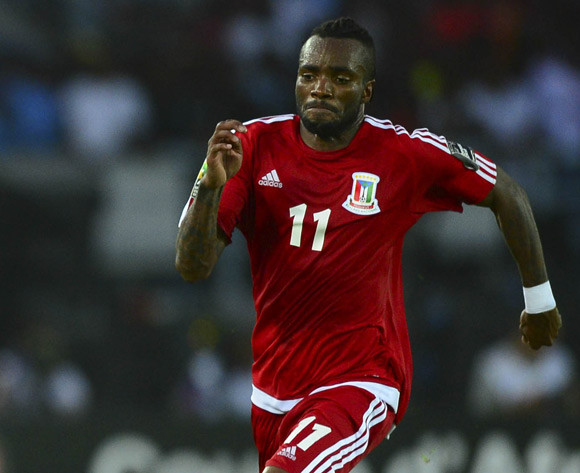 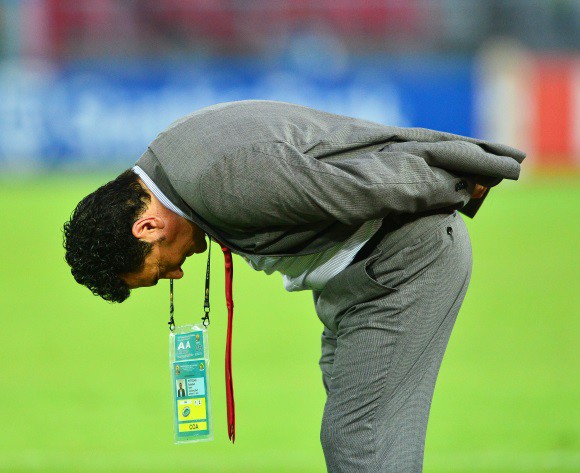 Welcome to the live play-by-play for the 2015 Africa Cup of Nations match between Gabon and Equatorial Guinea at Estadio de Bata.

Good evening and welcome to the live PBP for the 2015 African Cup of Nations game between hosts Equatorial Guinea and neighbours Gabon.
Equatorial Guinea need a win to progress while for Gabon a draw could be enough for the Panthers.
1' The match is underway!
4' The host nation playing the ball long and into the Gabon defence line, who are winning the early headers.
6' Tense! Lots of early fouls and big challenges going in as both sides want to show who is boss in the early stages.
8' Javier Balboa (Equatorial Guinea) takes a free kick.
9' But Balboa sends the ball way over the bar.
14' Nsure into space after a good through ball, but Ovono comes out to snuff out the danger.
15' Chance for Gabon, some good passing, but they cannot get the shot away on goal.
16' Johann Obiang (Gabon) is cautioned.

18' CHANCE! So close for Equatorial Guinea. Great early cross along the ground by Bilbao and Bosio is at the far post, but the Gabon defence just get there first.
20' Iban Iyanga (Randy) (Equatorial Guinea) is cautioned.

20' Great save by Ovono to deny Aubameyang who got in a powerful header.
24' The game has opened up now and chances coming on both ends, lively stuff!
26' Dangerous low cross from Nsue but cut out by Gabon's defence.
29' BIG SAVE! Ovono makes the save for the host nation to keep out Biyogo's close range shot.
37' Nsue stayed onside and had a clear run at goal, but crossed instead of shooting and got his cross all wrong.
40' Shot sent way over the crossbar by Kike Boula.
45' The referee brings the first half to an end.

45' No goals at the interval. Some passionate football and some good chances created.
45' Aubamyenag had a very good chance when his header was well saved at close range by Felipe Ovono.
46' The second half is underway
48' Javier Balboa with a wild shot way over the goals.
49' Ivan Zarandona (Equatorial Guinea) is cautioned.

51' GREAT SAVE! Felipe Ovono again makes the save, tipping over Bulot's curling free kick.
53' PENALTY for Equatorial Guinea as Balboa glides into the 18 area and gets tripped.
54' Lloyd Palun (Gabon) is cautioned.

57' Gabon attempt a cross and it is deflected, but flies just over the crossbar.
58' How will Gabon respond to going 1-0 down? Congo have scored in the group's other game, leading Burkina Faso 1-0.
58' CLOSE SHAVE! Bulot gets on the end of an Aubameyang cross, but is leaning back and sends the ball over the bar.
67' Equatorial Guinea: Ivan Salvador Edu 'Iban' replaces Enrique Boula Senobua 'Kike'

77' How did Balboa miss that one. One on one with the keeper, but his shot is kept out by Ovono's legs.
77' Gabon: Romaric Rogombe replaces Guelor Kanga

90' Five minutes of injury time to go!
90' The referee blows the whistle for Full Time.

90' Equatorial Guinea win 2-0, sending Gabon out the tournament. Congo and the host nation through to quarterfinals.

Welcome to the live play-by-play for the 2015 Africa Cup of Nations match between Gabon and Equatorial Guinea at Estadio de Bata.

Host nation Equatorial Guinea have reached the quarterfinal stages of Afcon 2015 after stunning Gabon 2-0 in their Group A clash on Sunday night in Bata.

It is the first time that Equatorial Guinea have reached the quarterfinal stage for the first time since 1992 and it was no surprise to see the jam-packed stadium erupt after the final whistle.

The match started in a very tense fashion with strong tackles going in all around the field. But it soon began to open up and the scoring chances started to come.

The host nation had the first chance on goal in the 8th minute when Javier Balboa’s free kick flew over the crossbar.

In the 20th minute Gabon star Pierre Aubamyenag should have netted when he got onto the end of a great cross to power a header goalwards, but Felipe Ovono made a good save.

Nine minutes later the impressive Felipe Ovono made another good save. This time he denied Biyogo Poko from close range.

Six minutes into the second half and Felipe Ovono again made an important save, this time tipping over Frederic Bulot's curling free kick.

Finally the opening goal came when Balboa made a clever run into the danger area in the 53rd minute and was tripped on his way through by Lloyd Palun.

Balboa took the penalty himself and made no mistake, powering the ball past Didier Ovono.

But Gabon came close to an equalizer in the 58th minute when Bulot got onto the end of a cross by Aubameyang. Bulot was leaning back though and sent the ball over the crossbar.

In the 77th minute Balboa should have got his second goal of the night when he had just the keeper to beat, but somehow his shot was kept out by Ovono’s legs.

The second goal came when substitute Ivan Salvador pounced in the 86th minute to net the rebound after Emilio Nsue’s shot was saved following a cross by Balboa.

Esteban Becker, the head coach of Equatorial Guinea has said they are going to fight like lions when they face Gabon on Sunday in a crucial Group A tie at the on-going Africa Cup of Nations.

The hosts need nothing less than a win if they hope to qualify for the quarter final.

“I am proud of my young team because they have managed to get two draws. But we must go all out and win the game against Gabon,” said the Argentine born coach who only took charge of the team three weeks ago.

Congo Brazzaville who stopped Gabon and drew with the hosts top Group A with four points, while Gabon are second and Equatorial Guinea third.

The 2013 finalists Burkina Faso are bottom of the group with one point.

The Equatorial Guinea side with key players like Emilio Nsue who scored their only goal against Congo Brazzaville, Enrique Boula Senobua and Javier Balboa must step up their game on Sunday and also hope that there is maximum support to push them through.

“I have told my players that this game is a game of their lives,” the coach told Africanfootball.com.

“We are creating so many chances, but not taking them. We shall try to address this problem ahead of our last group game,” said Costa.

Although the Gabon goalkeeper Didier Ovono has been outstanding in the tournament with some fine saves, he will have to organize his defenders well enough as they have continuously been caught off guard.

Germany based professional Pierre Aubameyang together with Malick Evouma are expected to lead the Gabon side.