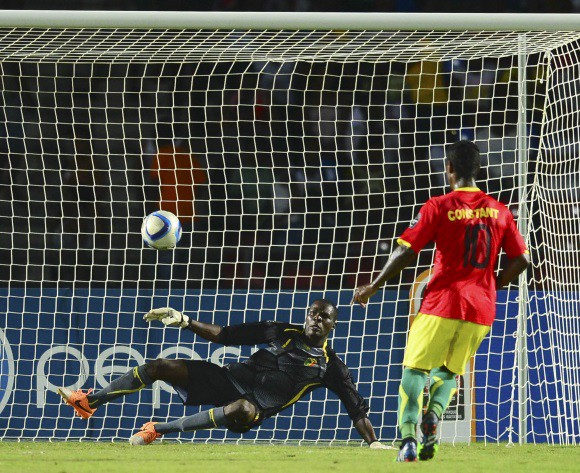 Kevin Constant stepped up to give his side the lead 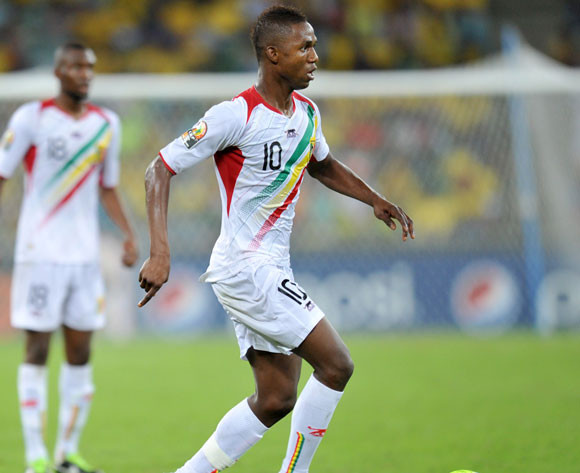 Welcome to the live play-by-play for the 2015 Africa Cup of Nations match between Guinea and Mali at Estadio de Mongomo.

1' The match is underway!
2' Diaby breaks for Mali and drives into the box, but his left-footed shot is inches over the target.
4' Guinea try to break forward in this fast start to the game, but the Mali defence stands strong and clears.
6' Goalmouth scramble inside the Guinea box and Diaby shoots, but his shot is deflected inches wide from ten-yards out.
7' Corner for Mali is whipped into the box, but Guinea clear the danger.
8' Another corner to Mali, but again Guinea clear and look to counter-attack. Nothing comes of the counter from Guinea.
10' Guinea playing a bit of keep ball at the moment as they try to build their confidence.
12' Mustapha Yatabare looks to be through on goal for Mali, but the ball is just beyond him and the keeper clears.
13' The referee has awarded a penalty for a handball inside the box by Molla Wague.
15' Kevin Constant (Guinea) takes a penalty kick on goal.

16' Penalty for Mali now after the referee adjudges a Guinea player to have handled the ball inside the box.
18' Seydou Keita sees his penalty saved by the keeper.
20' It has been a lively opening 20 minutes, but it is Guinea who have the lead.
22' Diaby drives into the Guinea box, but he sees his shot blocked by the defence.
25' The majority of the play is concentrated in the middle of the park at present.
26' A left sided free-kick is whipped into the Guinea box where there is a goalmouth scramble before the defence hack it clear.
28' Mali seeing a bit of the ball now, but not doing much with it.
29' Seydou Keita delivers a free-kick into the Guinea box, but all the Mali players are off-side.
32' Guinea are struggling to get out of their own half at the moment as the keeper collects a cross from the right.
34' Diaby with a 24-yard thunderbolt, but the keeper produces a great save to deny the Mali man.
35' Corner for Mali, but their is a foul in the box and Guinea will be able to clear.
38' Guinea attack down the right through constant, but his cross into the box is cleared.
40' Five minutes before the break, can Mali find an equaliser?
43' Guinea work the ball into the box and Ibrahima Traoré finds the ball in space, but his toe-poke lacks any real power and the keeper collects.
45' There will be one minute of added time.
45 + 1' The referee brings the first half to an end.

48' Mali with an instant response at the start of the second half as Modibo Maiga headed home a Diaby cross, 1-1.
50' That goal has set up a real interesting battle as both teams need the win to qualify.
53' Mamoutou N'Diaye with a long range shot, but the keeper produces a great save to deny him.
54' Corner for Mali comes in and it is touched over the crossbar by Diaby.
56' Issiaga Sylla (Guinea) is cautioned.

64' Mali are dominating possession stakes at present, but they are not doing anything with it.
67' Diaby breaks through on goal, but he is adjudged off-sides.
70' At present, as this group stands, Cote d'Ivoire will progress as they lead Cameroon 1-0, while if this game ends 1-1 there will be a draw tomorrow to determine who goes through.
71' Abdoulaye Diaby (Mali) is cautioned.

74' Sako wins a corner for Mali. The ball is delivered into the box, but Guinea clear.
76' Free-kick from the right is worked into the Guinea box and Molla Wague has a free header, but it goes wide.
78' Mali with a another cross into the Guinea box, but the keeper comes to collect with confidence.
80' Ten minutes to go. Can either of these countries find a winner?
81' Mali with a free-kick into a good area 22-yards out.
83' Seydou Keita hits it, but his 22-yard shot is straight into the wall.
84' Guinea: Abdoul Razzagui Camara replaces Kevin Constant

86' Guinea have a free-kick 22-yards out now. Could they win it here?
88' The Guinea free-kick is struck straight into the wall and Mali clear.
90' Mali: Abdou Traore replaces Mamoutou N'Diaye

Welcome to the live play-by-play for the 2015 Africa Cup of Nations match between Guinea and Mali at Estadio de Mongomo.

Mali and Guinea will enter a draw to see who moves into the quarterfinals of the 2015 African Cup of Nations after their final Group D match ended 1-1 at the Estadio De Mongomo on Wednesday night.

The result combined with Cote d’Ivoire’s 1-0 win over Cameroon in the other group game sees Mali and Guinea finished joint second and on the same goal difference which means CAf will conduct a draw tomorrow to see who goes through to the quarterfinals.

Mali came out the blocks firing with Abdoulaye Diaby driving into the box as early as the second minute, but he saw his 16-yard effort skim the wrong side of the crossbar.

Four minutes later Diaby was in the thick of the action again when he pounced on a loose ball inside the Guinea box following a goalmouth scramble, but his six-yard shot was deflected inches wide.

Guinea came into the game in the 13th minute when the referee awarded them a penalty for a handball inside the box by Mali’s Salif Coulibaly.

Kevin Constant stepped up to give his side the lead form the spot in the 15th minute, 1-0.

A minute later Mali were afforded the perfect opportunity to pull a goal back when the referee awarded a second penalty, this time adjudging Baissama Sankoh to have handled the ball inside the Guinea box.

Seydou Keita stepped up for Mail, but saw his penalty saved by Naby Yattara.

The Guinea keeper was at his best again in the 34th minute when he produced a great acrobatic save to tip a 30-yard pile-driver from Diaby over the crossbar.

The half ended 1-0 in favour of Guinea.

Mali drew level two minutes into the second half when a right wing cross from Diaby was headed home by Modibo Maiga, 1-1.

Only the brilliance of the Guinea keeper kept the scores level in the 53rd minute when a fingertip save from Naby Yattara saw him deny Mamoutou N'Diaye from 22-yards out.

Guinea, Mali in must win match

After playing two consecutives draws and just being able to score only two goals in those matches, Mali and Guinea will be looking forward to claiming their first victory of the tournament when they meet for an African Cup of Nations, Group D encounter on Wednesday night at 20h00.

A win from either of these sides will mean a ticket to the knockout stages of this tournament taking place at Equatorial Guinea.

Mali kicked off this tournament with a high note scoring first in both matches, but just like the South African team, they failed to maintain that lead.

Guinea coach Michel Dussuyer said there will be a lot at stake on this match which will also be a derby for both teams.

“There will be a lot at stake in this match, which is also a derby as Guinea and Mali are neighbours,” said Dussuyer.

“We know well this team of Mali. They are always there in the competitions and very seldom fail. They had two good games against Cameroon and Ivory Coast and while they conceded a late draw on both occasions they showed what we know about them : a very solid team, well organised, difficult to move around and with the ability to make the difference upfront.”

Dussuyer also added that they have what it takes to compete with any big team as long as they stay focused.

“We have a level of play which allows us to compete with the big teams if we are focused. This group has character and proved it,” he added.

On the other hand Mali captain Seydou Keita said his side will make sure that they did not repeat the same mistakes they made in their first two matches.

"We are very disappointed. When you look at our two games against Cameroon and the Ivory Coast, it is only small details that cost us the win,” said Keita.

As they prepare for this match against Guinea, Keita said he is aware of what Guinea is capable of and they will not underrate them.

"We do not underrate the Guinea team because we know they can be very dangerous but we have mapped out a plan to handle them," he added.