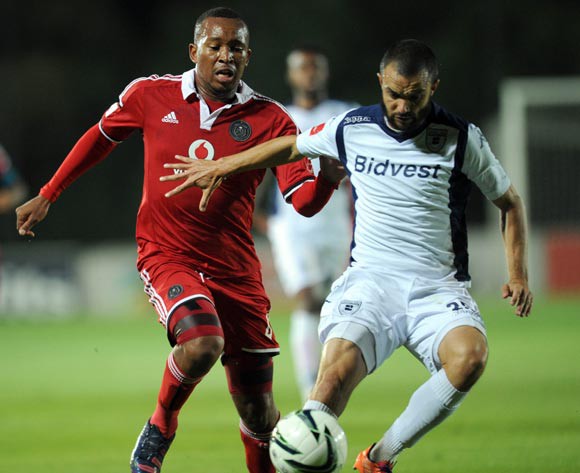 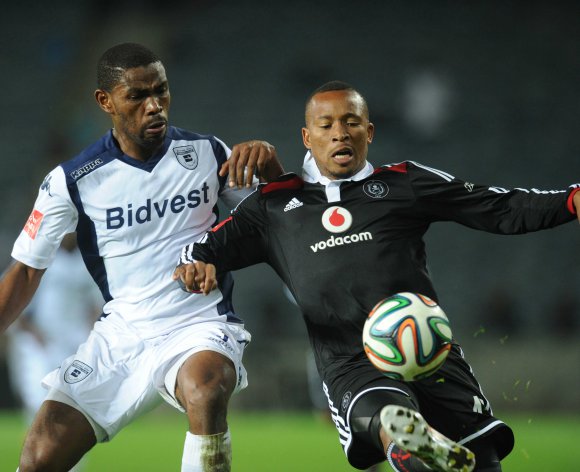 Welcome to the live play-by-play for the ABSA Premiership 2014/15 match between Bidvest Wits and Orlando Pirates at Bidvest Stadium.

Welcome to the live play-by-play for the ABSA Premiership 2014/15 match between Bidvest Wits and Orlando Pirates at Bidvest Stadium.

A Calvin Kadi double inside the opening 20 minutes was enough to give Bidvest Wits a 2-0 home win over Orlando Pirates in the Absa Premiership at Bidvest Stadium on Tuesday night.

Bidvest Wits took an early lead when Calvin Kadi got his first goal of the season from close range in the 1st minute.

Then Kadi pounced again in the 16th minute. After good work on the right flank by Sibusiso Vilakazi who swung in an early cross, Kadi arrived at the far post and used his left foot to volley home first time and the ball beat Siyabonga Mpontshane for pace.

Vilakazi was beginning to get more and more into the game and saw his attempt tipped over the crossbar by Bucs goalkeeper Siyabonga Mpontshane.

In the 40th minute, Henrico Botes got on the end of a deep cross, but he could not time his jump properly and the header lacked direction and power.

Then in the 42nd minute Bucs midfielder Issa Sarr put his glancing header just wide of the upright in a rare scoring opportunity for the visiting side.

Pirates started the second half a lot better as Wits defended deeper in their own half. It was Lehlohonolo Majoro who found himself one-on-one with Moeneeb Jospehs, but he tried to pick out a corner and missed the target altogether.

Bucs’ second half substitute Lennox Bacela had the ball in the back of the net from close range in the 57th minute, but he was correctly ruled offside.

After 61 minutes Pirates could have been back in the game when Sifiso Myeni made a great run through the centre of the field, but although his shot had power the ball sailed wide of the upright.

Pirates came close again in the 80th minute when a low cross came in from the left towards Lennox Bacela, but Wits’ defence did well to get to the ball first and block the shot.
Myeni did well in the 82nd minute as he cut in from the right and found Mpho Makola on the edge of the area, but his shot flew high and over the crossbar.

In the 88th minute Josephs made his first save of the game, denying Bacela from a close range header. Moments later Josephs tipped a low shot around his upright.

Bidvest Wits and Orlando Pirates will renew their Absa Premiership rivalry when they meet at Bidvest Stadium on Tuesday, 14 April 2015, kick-off at 19h30.

Wits saw their winless streak in the league extended to three matches when they were held to a 1-1 draw away to Polokwane City earlier in the month.

The Johannesburg side has claimed 22 points from 11 home matches this season.

Their next three league opponents are Black Aces (home), Free State Stars and Kaizer Chiefs (both away).

The Clever Boys are placed fourth on the Absa Premiership log with 41 points from 24 matches.

Pirates’ unbeaten streak was extended to 12 league matches when they played to a thrilling 3-3 draw at home to Platinum Stars.

The Soweto giants have claimed 20 points from 12 away matches this season.

Their next three league opponents are University of Pretoria, SuperSport United (both home) and Maritzburg United (away).

The Buccaneers are placed third on the Absa Premiership log with 44 points from 25 matches.

In head-to-head stats, Wits and Pirates have met in 58 league matches since 1985.

The Buccaneers have claimed 25 wins compared to 12 for the Clever Boys, while 21 matches have been drawn.

Wits have won seven of their 29 home matches against Pirates, suffering 11 defeats in the process.

When the teams met earlier this season, a late goal from Sangweni took the Buccaneers to a 1-0 home win.