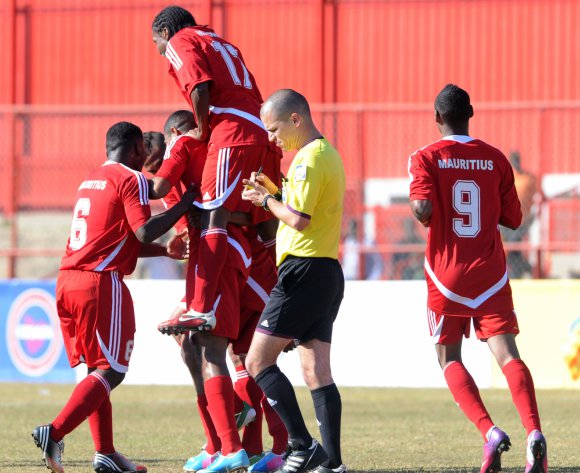 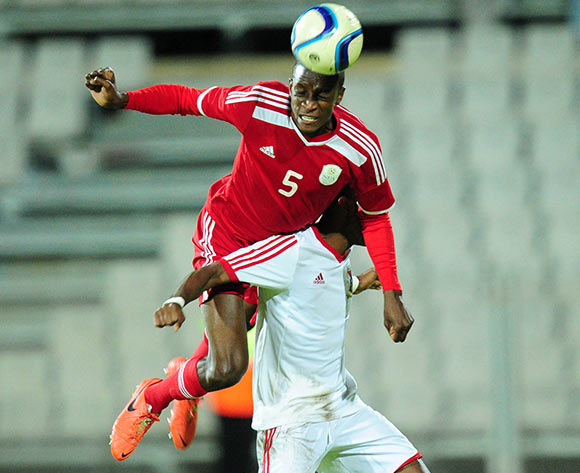 Chris Katjiukua of Namibia battles with Andy Sophie of Mauritius during the 2015 Cosafa Cup match between Mauritius and Namibia at the Moruleng Stadium, Rustenburg on the 19 May 2015 ©Muzi Ntombela/BackpagePix

Mauritius secured a 1-0 home win over Rwanda in Belle Vue on Saturday, in their third Group H outing of the 2017 Africa Cup of Nations qualifiers.

The result sees the islanders claim second place in the table halfway through the campaign, three points adrift of Ghana who have thus far enjoyed a perfect record.

Both sides struggled to create clear chances in a quiet opening half at Anjalay Stadium, and it was the hosts who came closer to opening the scoring with Li Kien Lee hitting the woodwork just past the half-an-hour mark.

Amavubi went all out to try to get something from their trip to the island, but lacked efficiency in front of goal to hand their opponents the three points at the final whistle.

Lying third on three points with three games remaining, Johnny McKinstry’s men will have no choice but to return to winning ways when they host the Club M in Kigali in the reverse fixture on Tuesday.

Mauritius will be eyeing their second 2017 Africa Cup of Nations (AFCON) qualifier win when they host Rwanda at the Stade Anjalay in Belle Vue Maurel on Saturday.

Les Dodos managed to hold Kenya to a goalless draw in their last competitive game away in the 2018 FIFA World Cup qualification (CAF) first round second-leg clash in October 2015.

However, Mauritius had suffered a 5-2 defeat to the Harambee Stars of Kenya at home in the first-leg. Andy Sophie and Jonathan Bru hit the back of the net for the home side.

French-Mauritian midfielder Kevin Bru has been included in the Les Dodos squad that will take on Rwanda this weekend by the head coach Joe Tshupula.

The 27-year-old central midfielder, who is currently in the books of English Championship side Ipswich Town, is a former France Under-19 international.

Despite losing 7-1 to Ghana in their first Group H game away, Mauritius bounced back and shocked Mozambique 1-0 at home - thanks to Fabien Pithia's goal.

Les Dodos are placed third on the qualification Group standings with three points. A win over Rwanda will see them move to the second spot.

Meanwhile, Rwanda will be out to cement their second spot when they lock horns with Mauritius on Saturday afternoon.

Amavubi were knocked of the 2016 African Nations Championships (CHAN) quarter-finals by the Democratic Republic of Congo (DRC). The tournament hosts lost 2-1 on extra-time.

The East African side were also beaten 3-2 on aggregate by Libya in the 2018 FIFA World Cup qualification (CAF) second round in November 2015.

Having been boosted by the arrival of six of their professional players in camp this week, Amavubi head coach Johnny McKinstry also inked a two-year extension.

Europe-based Saloman Nirisarike, Quentin Rushenguziminega and Elias Uzamukunda have been deemed fit ahead of the clash with Mauritius.

Rwanda are currently placed second on Group H standings - having beaten Mozambique 1-0 away and suffered a 1-0 home defeat to group leaders Ghana - who are on nine points.

Referee Lazard Tsiba from Congo-Brazzaville will be in charge of the encounter between Les Dodos of Mauritius and Rwanda's Amavubi.

The return leg will be played at the Amahoro Stadium in Kigali on Tuesday afternoon.