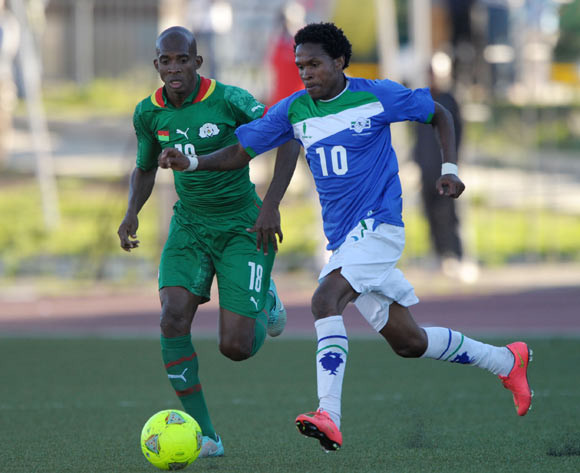 Mabuti Potloane of Lesotho challenged by Charles Kabore of Burkina Faso during the 2015 African Cup of Nations Qualifiers match between Lesotho and Burkina Faso at Setsoto Stadium, Maseru on the 15 November 2014 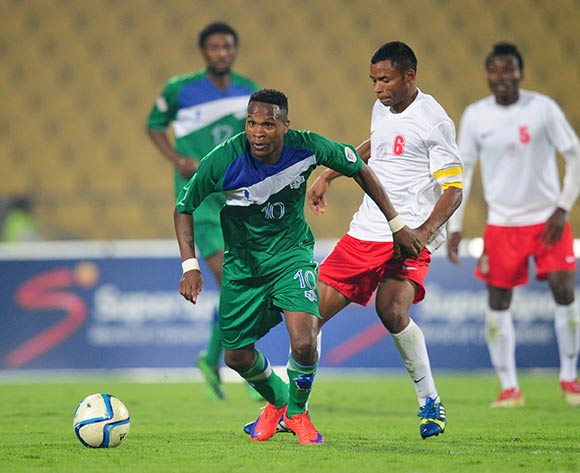 Tumelo Khutlang's goal earned Lesotho a 2-1 win over Seychelles in the 2017 Africa Cup of Nations (AFCON) qualifier played at the Setsoto Stadium in Maseru on Tuesday.

Despite their victory, Lesotho's Likoena remained at the bottom of Group J, while the Pirates of Seychelles also stayed on third spot.

Dine Suzette fired Seychelles into the lead after the 20-minute mark, but the Pirates' lead only lasted for a few minutes.

The home side restored parity through Tšotleho Jane's goal much to delight of the Likoena fans inside the Setsoto Stadium.

The score was 1-1 during the half-time break following an entertaining first-half in the capital City of Lesotho, Maseru.

Likoena took the lead for the first time on the day a few minutes after the restart and it was Tumelo Khutlang who made it 2-1.

Ultimately, Khutlang's goal proved to be the winning goal for Lesotho on the day and Likoena recorded their first Group J victory.

Lesotho will take on Ethiopia in their next Group J game at the Setsoto Stadium in June 2016, while Seychelles host Algeria on the same month.

Lesotho out for revenge

Lesotho will be out for revenge when they host Seychelles in a Group J 2017 Africa Cup of Nations qualifier in Maseru on Tuesday. Kick-off at Setsoto Stadium is set for 15h00 CAT.

The Crocodiles suffered their third straight defeat in the qualifiers on Saturday when they were beaten 2-0 in Victoria by the Islanders, who are up to four points in the group and level with second-placed Ethiopia.

Gervais Waye-Hive and Dine Suzette scored the goals for the Pirates, who will be hoping that this away match ends in a better result than their last, a 0-4 thrashing at the hands of group leaders Algeria in Blida back in June last year.

Lesotho’s previous home match was also a defeat to Algeria, with the Southern Africans going down 1-3 in Maseru in September.

Tanzanian referee Israel Mujuni will take charge of the match in Maseru. The other Group J clash sees Ethiopia host Algeria in Addis Ababa on the same day.