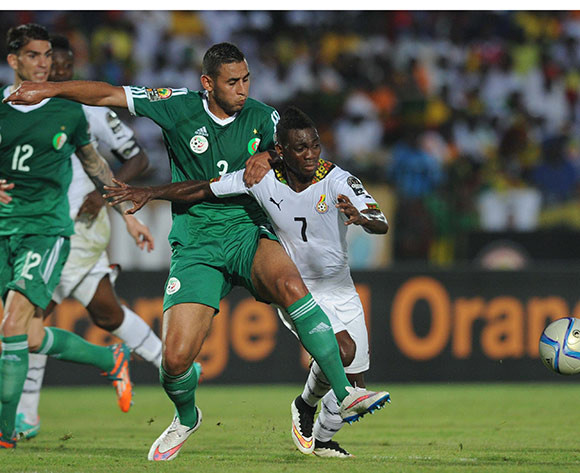 Faouzi Ghoulam of Algeria battles with Christian Atsu of Ghana during of the 2015 Africa Cup of Nations match between Ghana and Senegal at Mongomo Stadium, Equatorial Guinea on 23 January 2015 Pic Sydney Mahlangu/BackpagePix 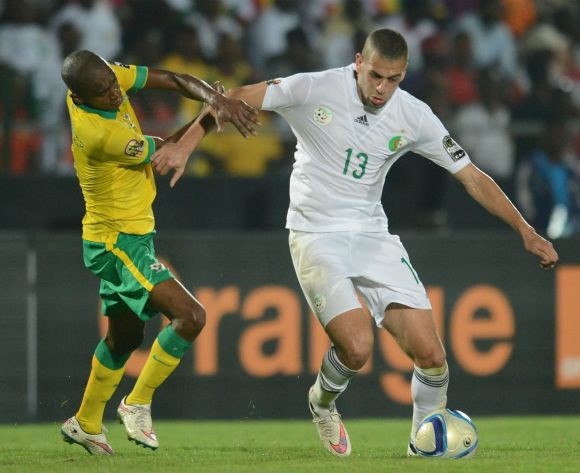 Algeria come from behind thrice to earn a draw

Algeria came from behind three times to earn a share of the spoils after their Group J, Africa Cup of Nations qualifier against Ethiopia ended 3-3 at the Addis Ababa Stadium on Tuesday.

The win sees Algeria maintain their spot at the top pf the qualifying group with ten points, followed by Ethiopia in second with five points.

Seychelles are third in the group with four points despite their 2-1 loss to Lesotho in an early qualification match. Lesotho are bottom of Group J with three points.

Getaneh Kebede scored his first of two on the day on the half hour mark to give Ethiopia a 1-0 lead.

Algeria, though, fought back and equalised two minutes before the break courtesy of a strike from Islam Slimani, 1-1.

Getaneh Kebede scored his second of the game and restored his country’s lead five minutes into the second half, 2-1.

Algeria hit back once more just after the hour mark when Aissa Mandi found the back of the net, 2-2.

Two minutes later Dawi Fikadu gave Ethiopia the lead for the third time, but yet again it was not to last after a penalty goal from Faouzi Ghoulam in the 85th minute gave Algeria hard-fought draw, 3-3.

Algeria will be out to secure their place at the 2017 Africa Cup Nations, hosted by Gabon, when they face Ethiopia in a qualifying match on Tuesday.

The ‘Fennecs’ moved a step closer to booking their place at next year's tournament with a thumping 7-1 win over the same opponents in Blida this past weekend.

Islam Slimani and Sofiane Feghouli both grabbed a brace with Yacine Brahimi, Saphir Taïder and Rachid Ghezzal adding to the visitors’ misery at the Stade Mustapha Tchaker.

Nine points from three games has opened a five point gap between the North Africans and Ethiopia atop the Group J standings, with the Seychelles having also managed four points from their allotted games.

As a result, Algeria could book their place at the upcoming showpiece with two games to spare: If Lesotho beats the Seychelles in Maseru and Algeria manage a win in the Ethiopian capital, the 1990 champions will be at next year's showpiece - a draw in Lesotho coupled with a win will also be enough for Christian Gourcuff's men.

Despite their comfortable win at home, winger Yacine Brahimi has predicted a totally different game in Ethiopia.

"It will be a different game," said the Porto winger. "In football, a game never looks like another. It will be a difficult trip. There, the particular climatic conditions are really hard, elevation and relatively high humidity."

Kick-off at the Addis Ababa Stadium is scheduled for 16h00 CAT.