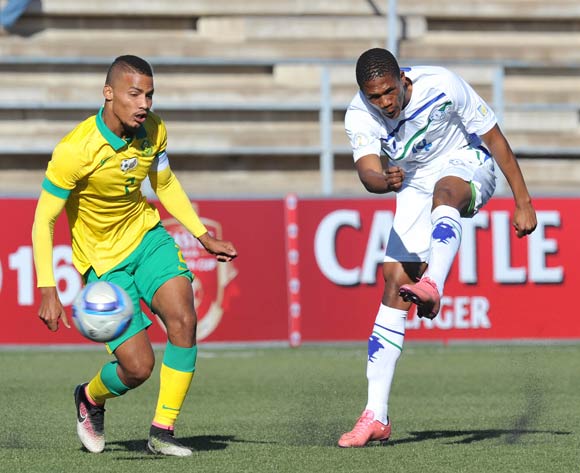 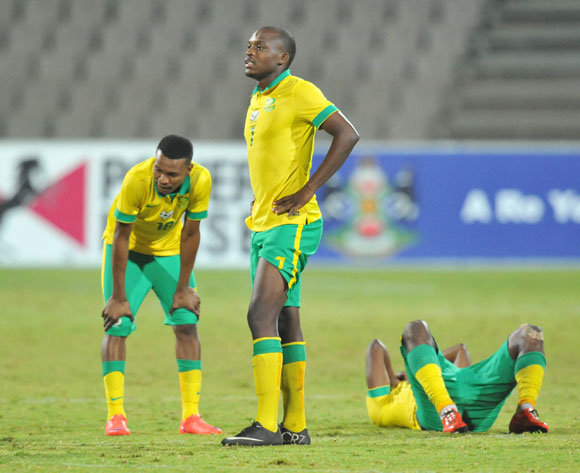 Although Lesotho scored first they failed to win the game as they lost 4-2 on penalties to South Africa during their 2016 COSAFA Castle Cup Quarter-Finals at the Sam Nujoma Stadium on Saturday afternoon.

The Likoena scored through Jane Thaba-Ntso, but Bafana Bafana equalised through Gift Motupa to take the match to penalty shoot-outs.

However, penalties by Jeremiah Kamela, Hlompho Kalake and two misses from captain Basia Makepe and Tumelo Khutlang failed to hand Lesotho a win.

On the other hand penalties from Deolin Mekoa, Abbubaker Mobara, Menzi Masuku, Aubrey Modiba and two saves from Reyaad Pieterse were enough to hand Bafana Bafana the win.

Although South Africa started like a house on fire in a packed stadium, they failed to convert their chances and allowed the Likoena back in the game.

In the 14th minute, Bafana Bafana received a free kick and Modiba failed to keep his attempt on target as it flew over the bar.

However, against the run of play in the 19th minute, Lesotho broke the deadlock when Jane Thaba-Ntso broke free and made his entry into the box before making a good turn and unleashed a great shot to beat Reyaad Pieterse on his far post.

The side from the mountainous kingdom continued to push for their second goal, butit was Coetzee that tried from range after good build up play, but the Ajax Cape Town defender couldn't trouble Jousse in the 63rd minute.

Two minutes later, Motupa finally bagged an equaliser when he was unmarked in the the box to easily head home, beating Jousse from Tebogo Moerane's delivery.

With fifteen minutes remaining, Thaba-Ntso nearly punished Bafana after a through ball beat the defence and his header to beat the oncoming Pieterse narrowly missed the target.

A few minutes later, Defender Kopano Tseka rescued Lesotho when he cleared the ball on the line from a sweet ball courtesy of Menzi Masuku.

With five minutes remaining, Motupa was shown a red card after a second bookable offence.

In the end there was no winner and it had to be decided on penalties to determine the cup semi-finalists.

In the wake of the loss, Lesotho will now meet the loser of the match between Zambia and Swaziland in the Plate Semi-finals on Tuesday afternoon.

The Likuena of Lesotho will be targeting another win when they face off against South Africa in the quarterfinal stage of the 2016 COSAFA Castle Cup on Saturday afternoon.

Moses Maliehe's side will be motivated to meet the 2015 hosts as that will test their character, but will bank on their fine form so far.

Lesotho have topped Group B with nine points and their sights are now firmly set on the semifinals of the regional showpiece.

Although they failed to reach the knock-out stages last year, their run in Namibia will surely motivate them to beat Bafana Bafana this time around.

This match is set to be the eighth meeting between the two nations, but Lesotho are yet to claim a victory with Bafana Bafana boasting four wins - three matches ended in draw.

Although they managed to beat a defiant Malawi in their final group match on Thursday, the challenge for them is to bag their first win against their neighbours.

Looking at the South Africans, coach Shakes Mashaba is aware that his team must hit the ground running and bag a win.

They failed to do well last year as hosts and lost to the Zebras of Botswana on penalties - their mission is to restore their pride in this showpiece.

Mashaba will hope to see the hunger his boys displayed during their 4-0 win over Gambia in the 2017 CAF Africa Cup of Nations qualifiers.

Despite having a new and youthful squad mixed with experience, Bafana have already studied the game of the opponents and will target nothing but a win.

The match is scheduled to get underway at 16h00 at the Sam Nujoma Stadium on Saturday afternoon.