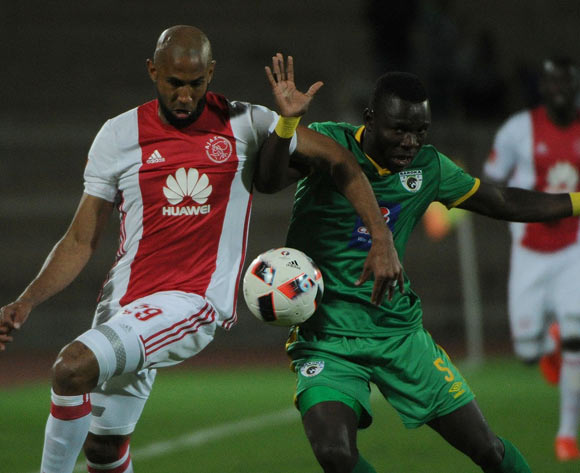 46' The second half is underway
52' Richard Matloga (Baroka FC) scores!

Baroka FC came back to secure a point when they drew 1-1 against Ajax Cape Town in their 2016/17 Absa Premiership opener at the Old Peter Mokaba Stadium on Tuesday night.

Richard Matloga netted for the hosts in the second half to cancel out Nathan Paulse's goal in the first stanza.

In the opening stages of the tie, Ajax were all over their opponents and in the eighth minute Paulse was fouled in the box by Siphelele Zikalala.

The referee pointed to the penalty spot and the experienced striker Paulse converted to make it 1-0.

After 18 minutes of play, Sipho Moeti exchanged good passes with Jacky Motshegwa in the middle of the park for the hosts and he managed to unleash a powerful shot which was saved by Brandon Petersen at the second attempt.

With three minutes to the half hour mark, Mathari Mothupa showed his class against the Urban Warriors but his cross had no-one to convert and Petersen collected with ease.

Motshegwa once again broke free in the 41st minute and was in a good position to pull one back for the hosts, but his attempt lacked power and the Ajax keeper made a fine save.

Despite putting pressure on Roger De Sa's men in the dying stages of the opening half, Bakgaga Ba Mphahlele failed to utilise their chances.

It was 1-0 at the interval and upon their return from the tunnel, Kgoloko Thobejane's side put more pressure on Ajax.

Subsequently, their efforts were rewarded when Matloga netted from close range with a fine header in the 52nd minute after a decent cross from the left.

Thabo Mosadi nearly got something for the visitors in the 63rd minute when he passed two defenders in the box only to see his effort deflected for a corner.

With 15 minutes to go, a free header from defender Mosa Lebusa came close to punishing the Baroka defence from a decent corner on the right, leaving keeper Oscarine Masuluke relieved.

In the last six minutes, Baroka continued to search for a winner but Collins Makgaka was once again denied by Petersen, who was outstanding between the sticks for Ajax.

With many chances created by the hosts, the encounter failed to produce a winner as both sides shared the spoils.

Baroka FC will make their Absa Premiership debut when they host Ajax Cape Town at the Old Peter Mokaba Stadium on 23 August 2016, kick-off at 19h30.

Baroka earned promotion to the top flight after they finished top of the 2015/16 National First Division.

The Limpopo side picked up 60 points from their 30 league matches in the second tier and finished one point ahead of runners-up Highlands Park.

The Cape Town side won their final match of the campaign (1-0 at home to Wits), but their last victory before that was a full seven games prior.

This will be the first top flight league clash between Baroka and Ajax.