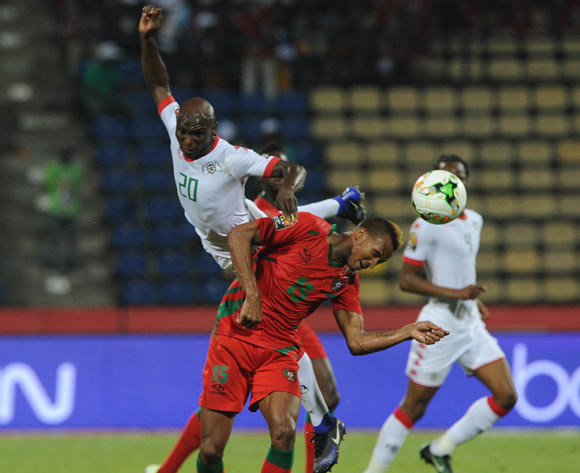 Brito E Silva Toni of Guinea Bissau is challenged by Yacouba Coulibaly of Burkina Faso during the Afcon Group A match between Guinea Bissau and Burkina Faso on the 22 January 2017 at Franceville , Gabon Pic Sydney Mahlangu/ BackpagePix 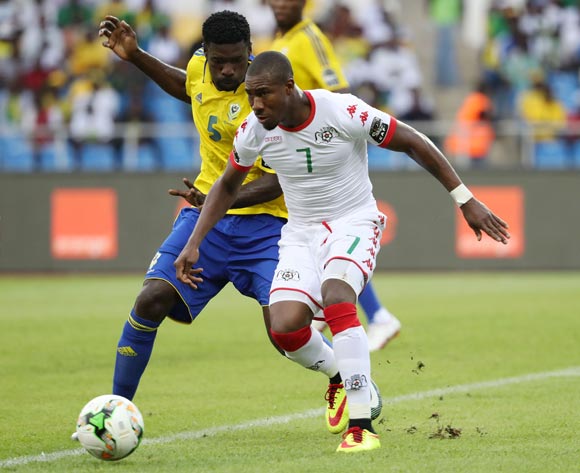 Prejuce Nakoulma of Burkina Faso (r) .challenged by Bruno Ecuele Manga of Gabon during the 2017 African Cup of Nations Finals Afcon football match between Gabon and Burkina Faso at the Libreville Stadium in Gabon on 18 January 2017 ©Gavin Barker/BackpagePix

Welcome to the live play-by-play for the 2017 Africa Cup of Nations match between Guinea-Bissau and Burkina Faso at Stade de Franceville.

Teams making their way onto the pitch; anthems to be followed by the action! All four teams; Cameroon, Gabon, Guinea-Bissau and Burkina Faso can still qualify for the knockout stages - all to play for this evening!
1' The match is underway!
5' Burkina Faso have dominated the early exchanges of the clash, with the 2013 Africa Cup of Nations runners-up eager to bag an early goal to put the minnows on the back foot. Stallions setting a high tempo early on.
7' Abdou Razack Traore (Burkina Faso) is cautioned.

8' CHANCE! Bertrand Traore races through on goal, but he is unable to find the back of the net! Great chance squandered by the Ajax man.
11' Rudinilson Silva (Guinea-Bissau) scores an own goal.

12' Rudinilson with the defensive mistake as he heads the ball into the back of his own net , ball crosses the line despite a desperate attempt by Tomás Dabó to bail out his teammate - Nakoulma makes sure as he hammers home the rebound.
21' Looks like the goal has been credited to Nakoulma, will keep an eye on that. Burkina Faso continue to set the trend with the Stallions all over their counterparts.
30' Half-hour played in Franceville - Burkina Faso still setting the tempo with Guinea Bissau struggling to keep hold of the ball.
35' Nervy defending by the Stallions as Guinea-Bissau probe - Koffi to the rescue as he punches from danger!Guinea-Bissau win a succession of corner-kicks as they find their rhythm.
40' Guinea-Bissau ending the half on a high, Burkina Faso forced to defend as the Djurtus go in search of the equaliser.
44' SAVE! Koffi with a great stop to deny Piqueti from an acute angle . Djurtus on top as we approach half-time.
45 + 1' Charles Kabore (Burkina Faso) is cautioned.

46' The second half is underway
55' Even start to the second half with Burkina Faso still holding a slender lead. Gabon and Cameroon yet to trouble the scoreboard over in Libreville.
57' GOAL! Bertrand Traore with an expert finish - great work by Nakoulma and Bance in the build-up as the Stallions double their lead.
57' Bertrand Traore (Burkina Faso) scores!

60' Hour played and Burkina Faso are now in the driving seat - surely on their way to the knockout stages.
63' Guinea-Bissau: Lassana Camará replaces Nani Soares

70' Both coaches ringing two changes a piece as we head into the final 20 minutes of the clash. Burkina Faso with one eye on the knockout stages, Guinea-Bissau in desperate search of a way back into this tie.
72' SAVE! Great stop by Koffi to deny Zezinho fro a free-kick attempt.
75' Guinea-Bissau: Aldair Adulai Djaló Baldé replaces Francisco Junior

85' Five minutes of regulation time remaining and as things stand Burkina Faso and Cameroon will advance from Group A
87' CLOSE! Toni Silva tries his luck from range and he goes within inches of pulling a goal back for the minnows.
90 + 4' The referee blows the whistle for Full Time.

Welcome to the live play-by-play for the 2017 Africa Cup of Nations match between Guinea-Bissau and Burkina Faso at Stade de Franceville.

Burkina Faso booked their place in the knockout stages of the 2017 Africa Cup of Nations following a 2-0 win over Guinea Bissau at the Stade de Franceville in the Gabonese city of Franceville on Sunday.

The Stallions advancing as Group A winners with Cameroon to join the 2013 AFCON runners-up in the latter stages of the competition. Minnows Guinea-Bissau bowing out alongside hosts Gabon, who were held to a 0-0 draw by the Indomitable Lions in Libreville at the same time.

Paulo Duarte's men made their intentions clear from the onset with Bertrand Traore guilty of missing a golden chance in the eighth minute after he was played straight through on goal by Prejuce Nakoulma.

Burkina Faso, though, would score soon after as Rudinilson directed the ball into the back of his own net. Tomas Dabo tried desperately to clear from danger, but the ball was adjudged to have crossed the line.

Djurtus first chance of the match fell the way of Piqueti in the 44th minute, but he was to be brilliantly denied by Kouakou Hervé Koffi. Burkina Faso 1-0 up at the interval.

Bertrand Traore doubled Burkina Faso's lead in the 57th minute. Brilliant work by Aristide Bancé and Nakoulma in the build up, with the latter setting up the Ajax man who finished with aplomb.

Zezinho and Toni Silva would probe late on for Guinea-Bissau, but Burkina Faso held firm as they sealed their passage to the next round.

Burkina Faso and Guinea-Bissau will lock horns in a 2017 Africa Cup of Nations clash at the Stade de Franceville in the Gabonese city of Franceville on Sunday evening, with both teams still in with a chance of booking their place in the knockout stages of the competition.

Cameroon lead the way in Group A with four points from their allotted matches, with Burkina Faso and hosts Gabon having accumulated two points apiece. African minnows, Guinea-Bissau, sit at the foot of the table with a single point to their credit.

The Stallions of Burkina Faso held four-time champions Cameroon to a 1-1 draw in their opening game of the tournament before first-half substitute Préjuce Nakoulma found the back of the net in a 1-1 stalemate against the Panthers.

Similarly, Djurtus played to a 1-1 draw against Gabon in what was the first game of the tournament before going down 2-1 to the Indomitable Lions in Libreville earlier this week.

Piqueti's breathtaking solo effort had opened the scoring for Guinea-Bissau on the day, only for Cameroon to flex their muscles in the second-half. But despite the result, Guinea-Bissau can still progress to the knockout stages with victory over the 2013 AFCON runners-up.

Burkina Faso have been dealt a major blow with injuries to both Jonathan Pitroipa and Jonathan Zongo.

Nakoulma, who replaced Pitroipa before finding the back of the next against Gabon, has highlighted the importance of the clash:

"All teams still have a chance. The last game we must win," the Turkey-based winger said.