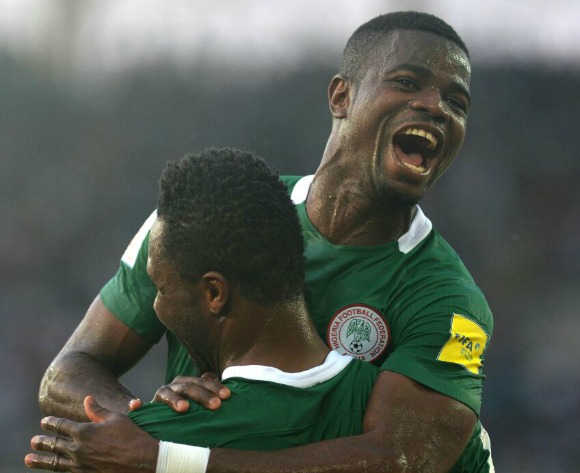 Mikel and Elderson joyous after Nigeria beat Algeria 3-1 in Uyo recently. They will now get their win bonuses for this win and that of Zambia as well 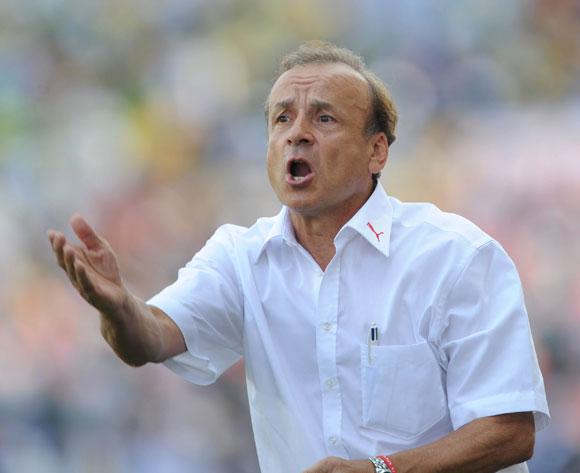 Nigeria consolidated their leadership of their 2018 World Cup qualifying group after they beat Algeria 3-1 in Uyo today.

They have now recorded six points from two matches, while Cameroon are second on two points after they forced Zambia to a 1-1 draw at home.

Zambia are third on a point ahead of Algeria, who also have a point.

The qualifying tournament will resume in August 2017 with Nigeria hosting Cameroon and Zambia at home to Algeria.

After a rather shaky start, the home team took the game to their opponents and they were rewarded after 25 minutes, when the lively Victor Moses was released by his fellow Chelsea star Mikel Obi to fire past Algeria goalkeeper M’Bolhi.

He certainly made up for his big miss in the seventh minute.

The Super Eagles doubled their lead three minutes from the interval when Mikel controlled the ball on top of the box and after a moment of hesitation rolled the ball beyond the Algerian shot stopper.

However, Algeria pulled a goal back in the 67th minute, when Nabil Bentaleb smashed home an unstoppable scorcher from distance.

Man of the match Victor Moses will then put the game beyond the North Africans in stoppage time, when he fired home off a low cross by substitute Ahmed Musa.

The outcome of this game would probably have been a lot different had the visitors made the most of two clear-cut chances in the first half.

First, Nabil Bentaleb threw away a sitter from inside the Nigeria box when the easier thing was for him to score after 36 minutes.

And minutes later, Riyad Mahrez came close to getting on the score sheet, but his shot from inside the box missed the target narrowly with the Nigeria defence at his mercy.

When Algeria pulled a goal back they pegged their hosts in their own half of the pitch with the dangerous Yacine Brahimi tormenting the Eagles defence and Riyad Mahrez in full charge of the midfield.

Goalkeeper Akpeyi, deputising for injured Carl Ikeme, tipped for a corner a free kick with nine minutes left on the clock and in the closing moments of this encounter Nigeria took the game again to their opponents before they were rewarded with a back-breaking goal by the impressive Victor Moses.

Nigeria coach Gernot Rohr has admitted Algeria will provide his team with their biggest test yet when both teams clash in a decisive 2018 World Cup qualifier in Uyo on Saturday.

Former Niger, Gabon and Burkina Faso coach Rohr has endeared himself to even critics who questioned his credentials and choice as the Super Eagles handler in July after he won his first two games in charge.

In September, he supervised a wasteful Eagles team to beat visiting Tanzania 1-0 in a final 2017 AFCON qualifier.

And the following month, he masterminded a first-ever win in Zambia to get Nigeria’s World Cup qualifying campaign off to a winning start.

“This is one of our biggest games because Algeria are one of the top teams in Africa,” said the Franco-German coach, who has thrown youngsters like Alex Iwobi and Kelechi Iheanacho into the deep-end with great success.

“It will be difficult, but I am confident in my players to do the maximum to win this game.”

The Eagles have been fortified for this game with the return of William Troost-Ekong, Oghenkaro Etebo and Victor Moses, who is enjoying a new lease of life at Chelsea after countless loan spells.

Algeria will be gunning for a result in Nigeria after they were forced to a 1-1 draw by Cameroon in front of their own fans.

The Desert Foxes have gone through some changes since that draw in Blida with Belgian coach Georges Leekens replacing Milovan Rajevac, who quit after a dressing room row with the country’s top stars.

It’s Leekens second spell with the North Africans and his baptism of fire will be against a team who have regained some self-belief and enjoy a better head-to-head record – 8 wins, 3 draws and 6 losses.

The former Belgium coach’s debut has not been made any easier by injuries to key players like Ryad Boundebouz, Hilal Soudani and Rachid Ghezzal.

Napoli left back Faouzi Ghoulam is “touch and go” as he is battling a groin problem.

But the form of 21-year-old midfielder Nabil Bentaleb at German Bundesliga club Schalke 04 would most certainly be a huge boost.

On loan from Premier League club Tottenham Hotspur, he has rattled in five goals in six competitive games and as a result Schalke have agreed to keep him for another season.

Top star is winger Riyad Mahrez has struck a good understanding with countryman and top striker Islam Slimani at Leicester City this season.

But despite his potent attacking arsenal, Leekens will be cautious with the main objective being that they cannot afford to lose in Nigeria.

Regular change of managers is CLEARLY affecting Algeria Team stability which is reflected in the results so far.