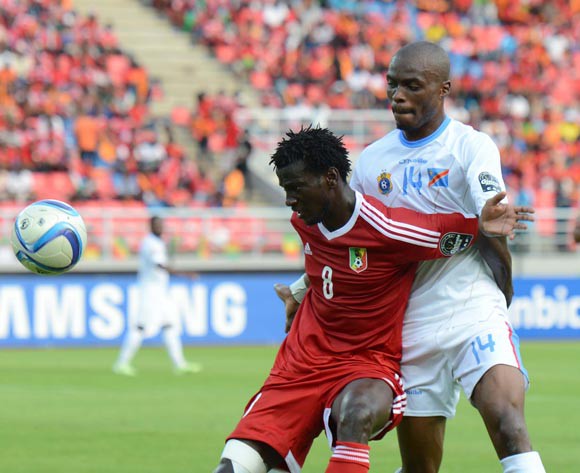 Delvin Ndinga of Congo is challenged by Gabriel Zakuani of DR Congo during of the 2015 Africa Cup of Nations QuarterFinal match between Congo and DR Congo at Bata Stadium, Equatorial Guinea on 31 January 2015

Cedric Bakambu bagged a double as the Democratic Republic of Congo beat Congo-Brazzaville 3-1 in an 2019 Africa Cup of Nations qualifier at the Stade des Martyrs in Kinshasa on Saturday evening.

Either side of the African continent's second largest river was firmly gripped as the two rivals went toe-to-toe in the DR Congo capital, with the hosts claiming the bragging rights on the day.

Victory moves them top of Group G with Liberia and Zimbabwe set to do battle in Harare on Sunday.

Two-time AFCON champions, DR Congo, opened the scoring in the 20th minute through Bakambu. The forward beating the offside trap before slipping the ball under the onrushing goal-minder.

It would be all square, though, heading into the tunnel at the break as Thievy Bifouma leveled matters for the Diables Rouges on the stroke of half-time.

The Leopards restored their lead in the 56th minute as Villarreal forward Bakambu completed his brace. Congo failed clear lines from corner-kick as the marksman pounced - thumping the ball into the back of the net.

Chancel Mbemba made sure of all three points for the hosts as he doubled their lead in second-half stoppage-time to send the home fans into ecstasy.

Congo derby to bring Kinshasa to a standstill

Kinshasa will come to a standstill this Saturday evening when the Democratic Republic of Congo welcome Congo to the Stade des Martyrs in a 2019 Africa Cup of Nations qualifier, that is set to grip either side of the continent's second largest river.

The 80 000 seater is set to be filled to capacity with the two teams out to get their campaign off to a winning start.

Two-time AFCON champions, DR Congo, have qualified for the continent's showpiece on 18 previous occasions - including the last three editions, losing to Ghana in the quarterfinal stage last year.

The Leopards, though, are desperate for success and are long overdue considering not only the strength of the national team, but also the club sides with TP Mazembe and AS Vita well known entities in Africa.

Florent Ibengé will have to continue doing without Everton winger Yannick Bolasie who is yet to recover from a long term injury, but the arrival on Benik Afobe on the national stage - the Bournemouth forward found the back of the net on his debut - has the DR Congo faithful excited.

Backed up by Cédric Bakambu, Chancel Mbemba and Jonathan Bolingi among others, the Leopards are a force to be reckoned with.

Congo-Brazzaville - 1972 champions - failed to qualify for last years tournament in Gabon, but Diables Rouges have been to seven AFCON tournaments in total.

They two have several exciting prospects in their ranks, but paired with Liberia, Zimbabwe and their neighbour rivals in Group G - Congo will have to be at their brilliant best.

In 27 previous meetings, DR Congo have accumulated 11 wins - suffering 9 defeats in what is usually a tightly contested dual. The match-up averages 3 goals a game.