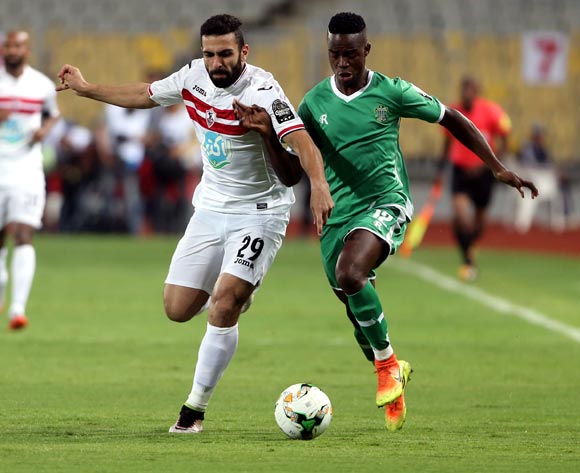 Al-Zamalek player Osama Ibrahim (L) in action against Caps United player Abbas Amidu (R) during the African Champions League (CAF) Round of 16 match between Al-Zamalek and Caps United at at Borg Al Arab Stadium in Alexandria , Egypt, 12 May 2017

Zamalek were held to a goalless draw by Al Ahli Tripoli in a 2017 CAF Champions League clash played at the Stade Taïeb Mhiri in Sfax, Tunisia on Tuesday evening.

The game got off to a lively start with White Knights midfielder Shikabala missing a chance at the one end, and El-Shenawy forced into a top save at the other within the opening 10 minutes.

The Libyans then went even closer in the 35th minute as they struck the woodwork.

But, despite chances at either end of the park the game would be deadlocked at 0-0 after the opening stanza.

Zamalek had a great chance to grab all three points in the dying exchange of the encounter.

USM Alger will be out to regain top spot in Group B when they take on CAPS United in Zimbabwe tomorrow afternoon.

Zamalek out to add to Al Ahli Tripoli's woes

Zamalek will be out to make it two wins from two matches in the 2017 CAF Champions League when they lock horns with Al Ahli Tripoli at the Stade Taïeb Mhiri in Sfax,Tunisia on Tuesday evening.

Kick-off in the Group B clash is scheduled for 19h00 CAT.

Portuguese manager Augusto Inacio guided the Egyptian giants to a third successive win last Thursday, a 2-1 victory over Wadi Degla cementing their place in third spot on the log standings.

Last years runners-up have like many of Africa's big guns enjoyed little rest period over the past couple of years, with the football schedule - especially on this continent - extremely demanding for successful clubs who compete on all fronts.

"We still have a long road to achieve our target, but we've reached a good position as the team now have 20 players ready to play," Inacio said at the post-game press conference.

"I found that some of Zamalek's players have not had a break for three years, so I decided to handle it myself; today I rested six players and the next game there are others who will get a break," he concluded.

Goals from Basem Morsey Stanley Ohawuch guided the White Knights to a 2-0 win over Zimbabwean side CAPS United in their opening group stage clash.

Something the five-time winners will be out to repeat when they take on the Libyan outfit. Al-Ahli lost 3-0 away to fellow North Africans USM Alger in their group stage opener as they continue to play their home matches away from home, due to on-going conflict in their country.

Zamalek will again we without playmaker Ayman Hefni due to injury.

Noureddine El Jaafari of Morocco will officiate the encounter.