morocco team player amrabat (L) and Malawi team player stanaly (R) fight for the ball during the qualifiers for the African Cup of Nations marocco and Malawi at Mohamed V Stadium in Casablanca , Morocco, 8 September2018. 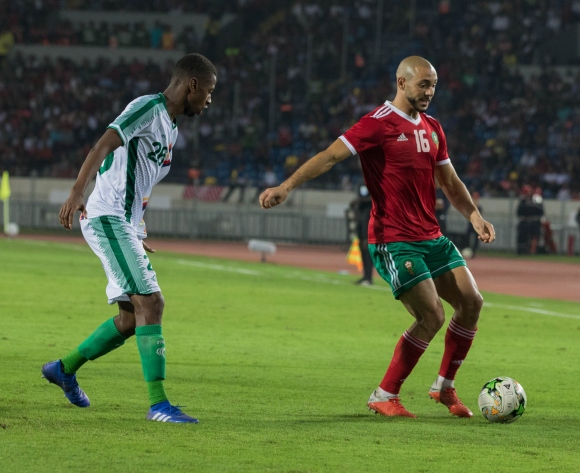 Comoros flight back against Morocco.

Comoros held Morocco to a 2-2 draw in the 2019 CAF Africa Cup of Nations (AFCON) Qualification Group B match at the Stade Said Mohamed Cheikh in Mitsamiouli on Tuesday.

The draw saw Les Coelacantes and the Atlas Lions remain third, and second respectively on the group standings

Comoros' Les Coelacantes were seeking revenge against the Atlas Lions of Morocco.

The Atlas Lions had recorded a hard-fought 1-0 victory over Les Coelacantes in an encounter which was played in Casablanca over the weekend.

The home side took the lead just eight minutes into the game with the visitors' defence exposed.

El Fardou Ben Nabouhane was the man, who beat Morocco goalkeeper Munir El-Kajoui to make it 1-0 to Comoros.

The Atlas Lions tried to press Les Coelacantes in search of the equalizing goal with the half-time fast approaching.

However, Comoros stood firm at the back and the hosts were leading 1-0 at the interval.

A second-half which was dominated by the visitors followed and they managed to level matters eight minutes after the restart.

Ahamada was beaten again in the 62nd minute and this time it was Nordin Amrabat, who scored to make it 2-1 to Morocco.

The hosts then pushed for a late equalizing goal and they managed to score through their star forward Ben Nabouhane.

The Serbia-based forward scored in stoppage time to ensure that Comoros drew 2-2 with Morocco in Mitsamiouli.

Comoros will square off with Morocco in the 2019 CAF Africa Cup of Nations (AFCON) Qualification Group B match.

The game will be played at the Stade Said Mohamed Cheikh in Mitsamiouli on Tuesday, October 16.

Les Coelacantes suffered a narrow 1-0 defeat to Morocco in a Group B match which was played in Casablanca over the weekend.

The defeat left Comoros placed fourth on the group standings with one point from three games. They are two points behind third-placed Malawi.

The Southern African side will be keen to keep its hopes of qualifying for the finals alive with a win over Morocco.

Meanwhile, Morocco are oozing with confidence having secured a home victory over Comoros.

The win took the Atlas Lions to second place on the group standings with six points from three games. They are a point behind leaders, Cameroon.

The North African giants will be eyeing another victory over Comoros which could take them to the top of the standings.