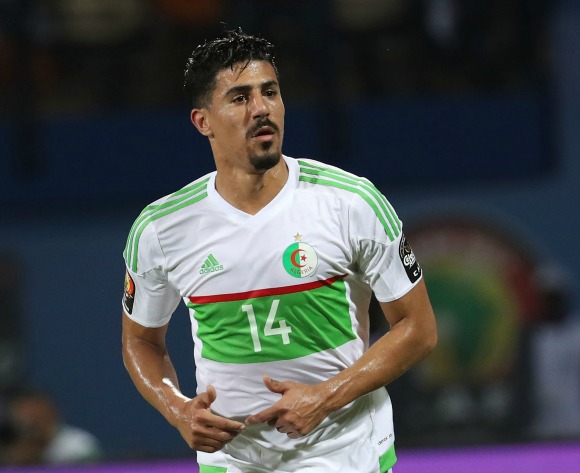 The Fennec Foxes are three points ahead of the Squirrels who they face in the reverse fixture in Cotonou on Tuesday. Gambia and Togo complete the group with the duo locked on two points apiece following their 1-1 draw in Lome.

Ramy Bensebaini and Baghdad Bounedjah found he back of the net for Algeria on a night largely dominated by the North African's.

Bensebaini opened the scoring for the hosts in the 21st minute of the game. Riyad Mahrez's corner-kick was expertly flicked on by Bounedjah, and Bensebaini made no mistake to send the home fans into delirium.

Huddersfield Town's Steve Mounie finally forced Rais M'Bolhi into a save in the 54th minute, with the Foxes shot-stopper on hand to keep out the towering Benin forward's header.

The hosts regained their ascendancy soon after and were only denied a second on the hour mark by some brilliant last-ditch defending with both Bounedjah and Mahrez stifled in quick succession.

Algeria duly doubled their lead in the 74th minute through Bounedjah who finished off a through ball by Sofiane Feghouli.

Recently recalled Ishak Belfodil should've made it three in the dying exchanges, but the forward failed to convert with the goal at his mercy.

It mattered little, though, in the end as Algeria returned to winning ways while also keeping their first clean sheet of the year.

Algeria will be aiming to reignite the sort of form they showed pre Gabon 2017 when they welcome Benin to the Stade Mustapha Tchaker on Friday in a 2019 Africa Cup of Nations qualifier.

The Fennec Foxes suffered four successive defeats before a 1-1 draw away to Gambia last time out, and despite boasting the likes of Manchester City's Riyad Mahrez in their squad it has been a fall from grace for the North African's.

Ranked within the top 20 in the world four years ago, Algeria now sit in 69th place following their failure to qualify for this year's FIFA World Cup in Russia.

In total, Algeria have won just two of their last 13 matches and former international Djamel Belmadi, who was appointed as head coach in August, will be desperate to lead the Foxes to an upturn in results as they aim to book their ticket to Cameroon.

Mahrez's form for his national team has come under particular scrutiny, but Belmadi has this week expressed his support for the wing-wizard.

“I have faith in Mahrez," Belmadi is quoted as saying." My idea is that good players like him, you need to love them. I know that what he did at Leicester and what he’s doing at Manchester City is different to what he’s showing with the national team.“

Algeria beat Togo in their opening qualifier last year and currently sit atop the group on four points alongside Benin.

The Squirrels edged past Gambia in Cotonou before a goalless draw away to Togo in their most recent match.

In eight previous meetings, Algeria are yet to lose to Benin with six wins and two draws from their allotted clashes.

The reverse fixture will take place at the Stade de l'Amitié in Cotonou on Tuesday.