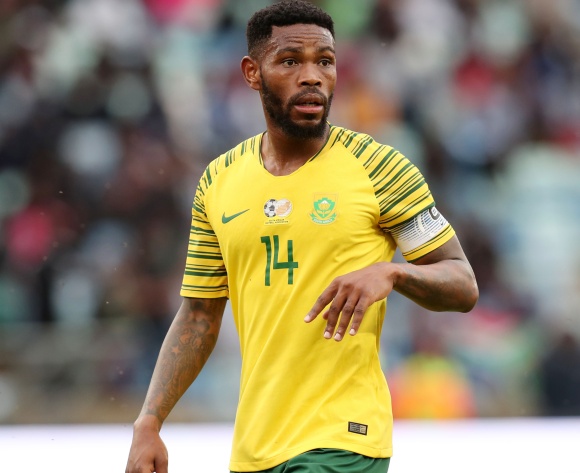 Thulani Hlatshwayo of South Africa during the 2019 African Cup Of Nations Qualifier match between South Africa and Libya at the Moses Mabhida Stadium, Durban on 08 September 2018 ©Muzi Ntombela/BackpagePix

South Africa annihilated Seychelles 6-0 in the 2019 Africa Cup of Nations (AFCON) qualification Group E game at the FNB Stadium in Johannesburg on Saturday.

As a result, Bafana Bafana moved to the top of the group table, while the Pirates remained fourth on the standings.

Bafana Bafana were looking to return to winning ways in their qualifying campaign having drawn 0-0 with Libya at home last month.

On the other hand, the Pirates were hoping to snap their winless run having lost 3-0 to Nigeria at home in their previous Group E game.

However, Bafana dominated the game from the start and they managed to break the deadlock 22 minutes into the encounter.

Seychelles defender Hoareau Nigel turned the ball into his own net to make it 1-0 to South Africa as the hosts' pressure paid off.

Stuart Baxter's side then doubled its lead three minutes later after the Pirates had failed to defend a corner-kick.

South Africa captain Thulani Hlatshwayo capitalized on some poor marking as he headed home to make it 2-0 the home side.

Bafana were running rampant as Lebogang Mothiba grabbed a goal to make it 3-0 to South Africa in the 26th minute.

The France-based striker, who is on the books of RC Strasbourg, scored on his competitive debut for the senior national team.

The Pirates defence which was led by Nigel were able to contain Bafana until South Sudanese referee Ring Nyier Akech Malong blew the half-time whistle.

The score was 3-0 to South Africa following a first-half which was dominated by the hosts.

Bafana continued their dominance after the restart with Percy Tau working hard upfront as the forward looked to put his name on the score sheet.

The Belgium-based attacker had an opportunity to score in the 56th minute, but he placed his effort over the crossbar.

Seychelles shot-stopper Romeo Barra was the busier of the two goalkeepers as he made two great saves to deny Mothiba and Aubrey Modiba after the hour-mark.

However, Barra was beaten in the 74th minute when Mothiba combined with Tau, who then hit the back of the net to make it 4-0 to South Africa following a great move.

The momentum was with the hosts in the closing stages of the game as Dino Ndlovu scored with a composed finish to make it 5-0 with 10 minutes left on the clock.

South Africa's 6-0 victory over a hapless Seychelles side was sealed by Teboho Mokoena, who scored with a header in stoppage time.

South Africa will face off with Seychelles in the 2019 CAF Africa Cup of Nations (AFCON) Qualification Group E match in Johannesburg on Saturday, October 13

Bafana Bafana were held to a 0-0 draw by Libya in their previous 2019 AFCON qualifier at home last month.

The draw extended South Africa's unbeaten run to three matches in all competitions having recorded two wins and one draw.

The Southern African giants will be looking to return to winning ways when they face a wounded Seychelles side.

Meanwhile, Seychelles succumbed to a 3-0 defeat to Nigeria in their previous 2019 AFCON qualifier at home last month.

The defeat extended the Pirates' winless run to 17 matches in all competitions having recorded 13 defeats and four draws.

The Southern African side will be keen to cause a major upset by defeating South Africa.