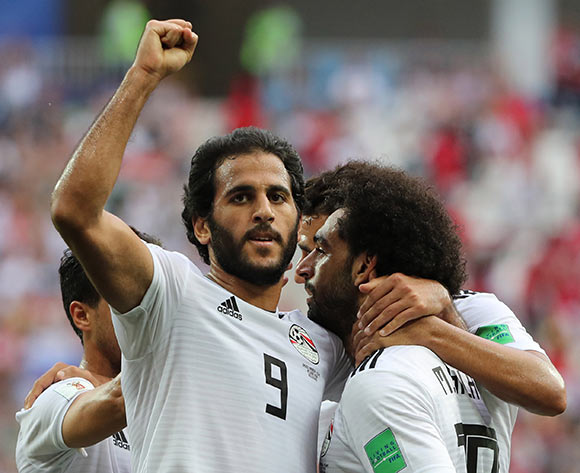 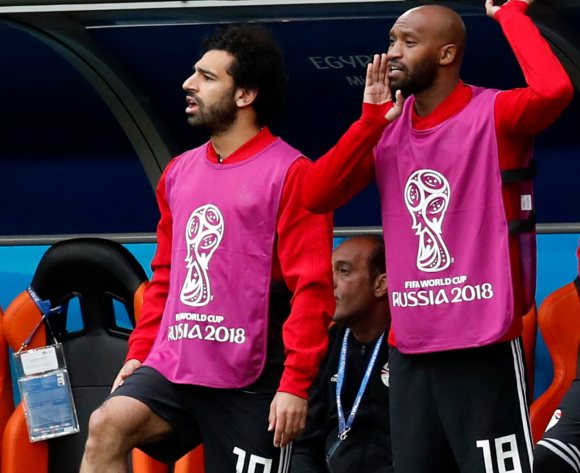 Mohamed Salah (L) of Egypt reacts from the bench

Egypt have returned to form in the 2019 Africa Cup of Nations qualifiers with a 6-0 thrashing of Group J rivals Niger at the Borg El Arab Stadium in Alexandria on Saturday night.

The result sees the Pharaohs move to second place on the log on three points, while the Menas drop to fourth on one point. The other Group J game between leaders Tunisia (three points) and third-placed Swaziland (one point) will take place in Mazini on Sunday.

Egypt, in their first game under new manager Javier Aguirre, were on top from the early minutes and had a penalty within the first 60 seconds after kick-off, with Mohamed Salah fouled in the box. The Liverpool forward took the spot kick himself, but was denied by the Niger goalkeeper Kassaly Daouda.

In the fourth minute Ahmed Hegazy almost gave the hosts the lead, sending a header from a corner kick just over the crossbar, while Salah and Marwan Mohsen missed further clear chances within the opening period.

Yet the Pharaohs didn’t have to wait long for their opener, as Salah assisted Mohsen to make it 1-0 in the 13th minute. The striker controlled a fine pass from the right flank before steering a shot beyond the ‘keeper’s right-hand.

Seven minutes later it was 2-0, with left-back Ayman Ashraf taking advantage of some poor defending from Mahamadou Souley to roll a low shot into the back of the net.

Just before the half-hour mark Egypt increased their goal tally through Salah, who was again denied from the penalty spot by the Niger ‘keeper, but reacted quickly to score on the rebound. The spot kick was earned by Mahmoud Trezeguet.

The tempo dropped in the second half, with Egypt taking their foot off the pedal somewhat, though they still racked up a fourth goal through substitute Salah Mohsen in the 73rd minute, as he played a one-two before sending an angled drive into the bottom corner.

Mo Salah racked up his second goal of the night the 85th minute, heading home from a pinpoint cross by Ahmed Elmohamady, before the scoring was completed in injury time with a deflected strike from Mohamed Elneny.

The teams will return to 2019 AFCON qualifying action next month, with Egypt facing Swaziland in a double-header and Niger twice battling another North African giant in the shape of Tunisia.

Egypt will look to bounce back to winning form in Group J of the 2019 Africa Cup of Nations qualifiers when they host Niger at the Borg El Arab Stadium in Alexandria on Saturday, September 8, kick-off at 20h00 CAT.

Egypt are placed last on the group log after they opened their campaign with a 1-0 away loss to North African rivals Tunisia in June last year. Taha Yassine Kehnissi scored the only goal as the Pharaohs – who were runners-up at the last AFCON finals in 2017 – slumped to defeat in Rades.

Niger are level with Swaziland on one point on the Group J log after the teams shared the spoils in a goalless stalemate in Niamey. The Menas are aiming for a return to the continental finals after their appearances in 2012 and 2013.

Egypt come into the game on the back of a disappointing 2018 World Cup campaign which saw them suffer three successive defeats to Uruguay, hosts Russia and Saudi Arabia. They have a new coach in charge in the shape of Javier Aguirre, who succeeded Hector Cuper.

By contrast, Niger appear to be in fine form after recording a 3-3 draw with Central African Republic and a 2-1 win over Uganda in friendlies in late May and early June.

Egypt and Niger has clashed in three previous matches, according to FIFA’s statistics database. The Pharaohs are unbeaten, with two wins and a draw to their name. The teams’ most recent clash was a friendly in Doha in 2012 which was won 1-0 by Egypt.

Senegalese referee Maguette N’Diaye will take charge of the game in Alexandria. The other Group J match will be played on Sunday, September 9 and sees Swaziland host Tunisia in Manzini.