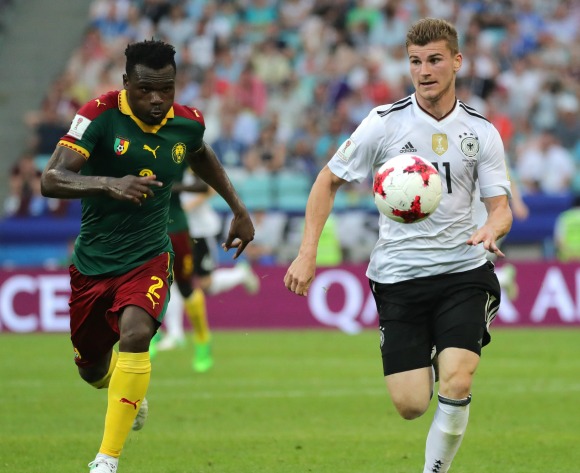 Ernest Mabouka (L) of Cameroon and Timo Werner of Germany in action during the FIFA Confederations Cup 2017 group B soccer match between Germany and Cameroon at the Fisht Stadium in Sochi, Russia, 25 June 2017. EPA/ARMANDO BABANI 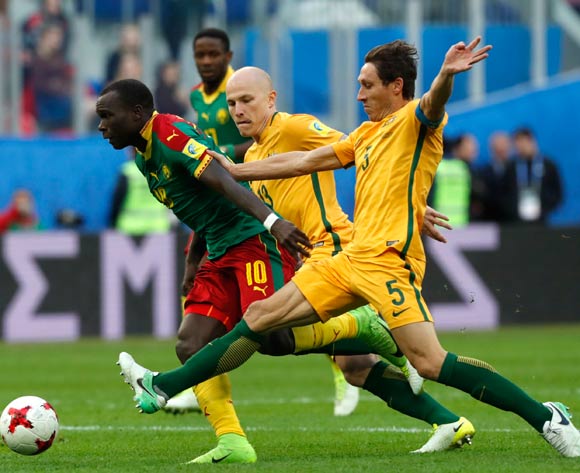 epa06043709 Vincent Aboubakar (L) of Cameroon and Mark Milligan of Australia in action during the FIFA Confederations Cup 2017 group B soccer match between Cameroon and Australia at the Saint Petersburg stadium in St.Petersburg, Russia, 22 June 2017. EPA/ANATOLY MALTSEV

Cameroon have crashed out of the 2017 FIFA Confederations Cup following a 3-1 defeat to Germany at the Fisht Olympic Stadium in Sochi, Russia on Sunday evening.

As a result, the FIFA World Cup holders advance as Group B winners with Chile ending as runners-up following their 1-1 draw with Australia.

Die Mannschaft will face Mexico in the semifinals with Portugal and La Roja to lock horns in Kazan.

The Indomitable Lions played the final 25 minutes with 10-men following the controversial sending off of Ernest Mabouka. The Germans took fool advantage as they cruised into the knockout stages.

Hugo Broos named the same starting 11 for the third game in succession following an injury to Georges Mandjeck in the warm up - Arnaud Djoum subsequently retook his place on the pitch.

Needing nothing but a win, the Indomitable Lions were quick out of the blocks and made a positive start; the Africans just lacking in the final third.

Germany would then create two good chances in quick succession with Emre Can seeing his curling effort inches wide before Joshua Kimmich headed wide with the goal at his mercy.

The African champions ended the half on top with André-Frank Zambo Anguissa forcing Marc-Andre ter Stegen into a good save a minute before the break.

It would be the Germans, though, to open the scoring three minutes after the interval. Hoffenheim midfielder Kerem Demirbay charging onto a nifty pass from Julian Draxler before powering an unstoppable shot into the roof of the net.

Fabrice Ondoa was called into action once more in the 54th minute, with the Cameroon number one pulling off two world class saves to deny Louw's troops.

Mabouka would receive his marching orders in the 65th minute following what was a contentious decision by the referee. Following advise from the Video Assistant Referee (VAR) the official adjudged the defender's challenge on Can to have been of a dangerous nature.

Having initially sent off the wrong player, the referee luckily gathered himself to spare his blushes - to an extent.

There would be a glimmer of hope for Cameroon in the 78th minute as Vincent Aboubakar nodded home from an acute angle. Ter Stegen guilty of some questionable goalkeeping.

The goal would prove a mere consolation as Werner completed his brace with a superb finish three minutes later. Germany on course as Cameroon return home.

Cameroon will target a win over Germany and a place in the semifinals of the Confederations Cup when the teams meet on Sunday evening in Sochi.

The teams’ final Group B clash is set for the Fisht Olympic Stadium and will kick-off at 17h00 CAT.

The Indomitable Lions have had a tough time of things in Russia thus far, losing their opening match 0-2 to Chile before drawing 1-1 with Australia on Thursday evening.

The West Africans had enough chances to bury the Socceroos, but Vincent Aboubakar was particularly guilty of spurning some wonderful opportunities.

The results have left Hugo Broos’ team at the bottom of the pool with just one point, trailing co-leaders Germany and Chile by three points.

Yet a two-goal victory over Germany would be enough to see Cameroon leapfrog the Europeans on goal difference and probably secure progression - assuming Australia don’t beat Chile in the other Group B match.

Yet even if Cameroon cannot beat Germany, Broos insists that the team has still come a long way in a short space of time.

"A year ago we didn't even have a team. Today you have a team that won the Africa Cup of Nations and that's progress," the Belgian coach said in the wake of the draw with Australia.

"You should not think that winning the Africa Cup of Nations means that you can win the Confederations Cup and next year the World Cup.

“That's not how it works. Let this team grow, let it get some experience and if tomorrow I can find someone who scores goals with his eyes closed, he'll be in my team."

Cameroon have not beaten Germany in three previous meetings between the teams. Their most recent clash was a friendly in Monchengladbach in June 2014 which ended in a 2-2 draw.