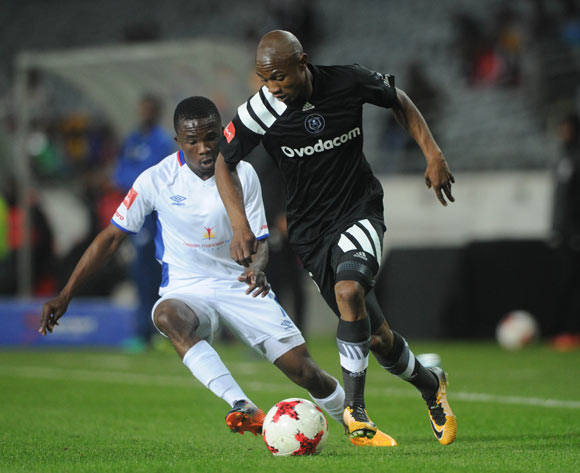 Welcome to the live play-by-play for the ABSA Premiership 2017/18 match between Orlando Pirates and Chippa United at Orlando Stadium.

Welcome to the live play-by-play for the ABSA Premiership 2017/18 match between Orlando Pirates and Chippa United at Orlando Stadium.

Orlando Pirates beat Chippa United 1-0 in an Absa Premiership match at the Orlando Stadium on Saturday.

As a result, the Buccaners started their 2017/18 season with a victory over the Chilli Boys.

United goalkeeper Brighton Mhlongo, who was making his debut against his former side, was the busier of the two goalkeepers in the early stages of the game.

The lanky keeper did well to deny Pirates midfielder Mpho Makola seven minutes into the encounter following a good move the hosts.

However, the former South Africa youth international was beaten seven minutes after the half-hour mark by Thamsanqa Gabuza.

Innocent Maela played a good cross into the United box and Gabuza headed past Mhlongo to make it 1-0 to Pirates much to the delight of the home crowd.

It should have been 2-0 to Pirates at half-time, but Musa Nyatama fired over the crossbar in the 43rd minute following a quick counter-attack by Pirates.

A relatively quiet second-half followed as the two sides failed to create good goal scoring opportunties in the first 15 minutes.

Moeketsi Sekola, the United striker, tried his luck from range in the 67th minute and his effort sailed over the crossbar.

The Pirates keeper Wayne Sandilands was seriously tested in the 81st minute as the Chilli Boys looked to restore parity.

Pirates were able to contain United in the closing stages of the match and they ran out 1-0 winners over the Chilli Boys.

Orlando Pirates and Chippa United will look to get off to a flying start in the 2017/18 Absa Premiership when they meet at Orlando Stadium on 19 August 2017, kick-off at 18h00.

Pirates are in need of a strong campaign, having endured a hugely disappointing season last term. The Buccaneers failed to finish in the top eight for the first time in PSL history and ended off the season with a crushing defeat at the hands of SuperSport United in the Nedbank Cup final.

Pirates bid farewell to coach Kjell Jonevret in the offseason and have replaced him with highly regarded Serbian coach Milutin Sredojevic. ‘Micho’ returns to Bucs for a second spell, having been in charge of the club for half a season back in 2006/07.

Chippa United also had a difficult 2016/17 season and only avoided finishing in the relegation zone thanks to a superior goal difference. The club’s chopping and changing of coaches through the season didn’t help their cause, but they appear to have settled on Dan Malesela - for now at least.

The Chilli Boys have lost some key figures in the transfer market, particularly influential midfielder Thamsanqa Sangweni, but the acquisition of the likes of Brighton Mhlongo and Moketsi Sekola serves to strengthen their squad.

Pirates and Chippa have met in eight league matches since the 2012/13 season (when the latter first played in the top flight) and the rivalry has been a closely fought one: the Buccaneers have four wins compared to three for the Chilli Boys, while just one match ended in a draw.

Pirates have won three of their four home matches against Chippa, including a 2-1 triumph in the second half of last season, thanks to goals from Thamsanqa Gabuza and Thabo Matlaba. This saw the Soweto side complete a league ‘double’, as they also won 1-0 in the Eastern Cape earlier in the campaign.