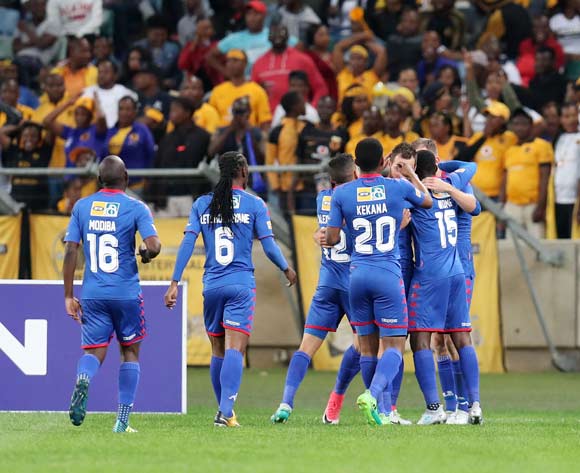 1' The match is underway!
3' Good turnout in Durban at a Stadium where both teams have tasted recent cup success. Chiefs have a lot of fans in KZN.
6' Jeremy Brockie (SuperSport Utd) scores!

6' SuperSport United hit the front in Durban following a quick counter-attack,Grobler with a delightful pass, but Brockie still had a lot to do. He cuts in field and fires past Khune! Eric Tinkler's impact immediately evident.
12' Kaizer Chiefs looking for a way back into the clash, but SuperSport survive a spell of Amakhosi pressure.
14' Chiefs, though, have to be very wary of the counter-attack. Ronwen Williams quick to release the ball to the SuperSport attackers on transition.
19' Parker gets in behind the SuperSport United defence and tries to pick out Paez, but his cross goes out of play.
23' POST! Tshabalala's deflected effort canon's off the woodwork. Best chance of the match for the Amakhosi.
29' Bradley Grobler (SuperSport Utd) is cautioned.

33' Ronwen Williams escapes from what would have been an embarrassing moment. Amakhosi closing down their opponents in frantic fashion as they look for the equaliser.
35' SAVE! Excellent stop by Ronwen Williams to keep our Bernard Parker's bullet from the edge of the area. Amakhosi on top, but behind.
43' Glamour Boys all over their opponents as we enter the final few minutes of the first-half; just can't find that killer blow (deja vu really).
45 + 4' The referee brings the first half to an end.

46' The second half is underway
50' Good start to the half by the visitors - as in the first - they are the one's making early inroads.
52' Lucky escape for Khune who made a hash of his attempted clearance, Mathoho gets back well to clear Grobler's shot from bouncing into the back of the net.
55' POST! Parker's header bounces off the woodwork before Kekana clears off the line. All happening.
60' Hour played at the Moses Mabhida Stadium - SuperSport United still holding onto a narrow lead as things start to get heated between the two sides.
61' Dean Furman (SuperSport Utd) is cautioned.

75' WOODWORK! For the third time in the match, Kaizer Chiefs have seen the ball rattle the frame of the goal with Hendrick Ekstein's shot hitting the crossbar.
80' SuperSport Utd: Tefu Mashamaite replaces Clayton Daniels

86' Into the final few minutes of regulation time we go. SuperSport happy to sit back and absorb constant Chiefs pressure, will they be able to hold on?
88' Aubrey Modiba (SuperSport Utd) is cautioned.

Kaizer Chiefs and SuperSport United will renew their cup rivalry when they meet in the quarterfinals of the MTN8 on 12 August 2017 at the Moses Mabhida Stadium, kick-off at 20h15.

On the cup front, the Amakhosi fared no better: they were beaten in the quarterfinals in all three competitions: 0-1 to Cape Town City in the MTN8, and on penalties to both Free State Stars and SuperSport United in the Telkom Knockout and Nedbank Cup respectively.

Yet the Soweto giants have an unrivalled pedigree in the MTN8, having won it a record 15 times (most recently in 2014). This year’s Top Eight cup must be seen as a priority for Chiefs, who need a trophy early in the season to convince their demanding fans that a return to the top of South African football is a case of ‘when’ rather than ‘if’.

SuperSport had a curious 2016/17 league season: at one time they looked capable of challenging the likes of Bidvest Wits and Mamelodi Sundowns for the title (even going on a 19-game unbeaten run), but they ended up a disappointing fifth after losing five of their last 10 matches.

In cup competitions Matsatsantsa enjoyed two strong runs in the Telkom Knockout (where they lost to Cape Town City in the final) and the Nedbank Cup (where they thrashed Orlando Pirates in the final to claim their fifth title), but their MTN8 campaign was a short one, having lost 3-1 to Sundowns in the quarterfinals.

This match sees Chiefs and United meet for a 14th time in cup competitions. The previous 13 matches have produced eight outright wins for the Amakhosi, four in favour of Matsatsantsa, while the one draw was last season’s Nedbank Cup quarterfinal which ended 1-1 but went the way of United on post-match penalties.

The teams’ last meeting in the Top Eight was back when the competition was still known as the SAA Supa8, and Chiefs defeated SuperSport 1-0 in the 2006 final thanks to goal from Rotson Kilambe.

In all, Chiefs and SuperSport have clashed in 66 matches across all competitions since 1990. The Soweto side has claimed 27 wins compared to 23 for the Tshwane club, with 16 matches ending in draws. The teams’ two league meetings last season were 1-1 and 2-2 draws at FNB Stadium and Mbombela Stadium respectively.