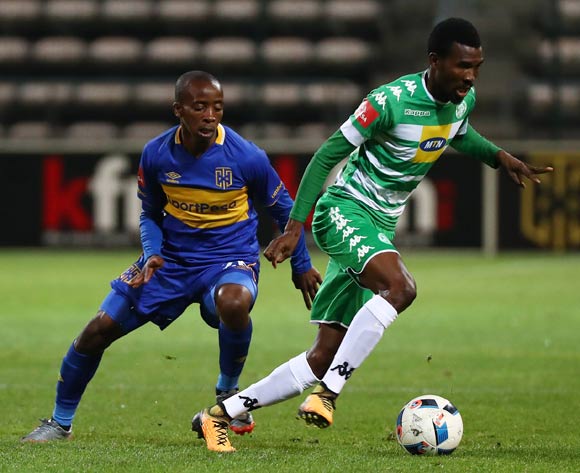 Welcome to the live play-by-play for the ABSA Premiership 2017/18 match between Cape Town City FC and Bloemfontein Celtic at Athlone Stadium.

Welcome to the live play-by-play for the ABSA Premiership 2017/18 match between Cape Town City FC and Bloemfontein Celtic at Athlone Stadium.

Kabelo Mahlasela scored the only goal of the game as Bloemfontein Celtic beat Cape Town City 1-0 in an Absa Premiership encounter at Athlone Stadium on Tuesday evening.

The midfielder rounding of a free-flowing move with a neat bit of skill to condemn the Citizens to a third league defeat of the season.

Taariq Fielies, Thabo Nodada and Teko Modise were the only survivors in Benni McCarthy's starting 11 from the side that took to the field against SuperSport United this past weekend.

The former Bafana Bafana forward forced into wholesale changes following the club's MTN8 final defeat to Matsatsantsa. The game was decided from the spot following 120 minutes of football.

Fatigued following their travels, it was no surprise that Siwelele came out the better unit. Ndumiso Mabena denied by Sage Stephens on 15 minutes.

But, in all, it was a rather dull half with the teams deadlocked at 0-0 at the interval.

The opening goal finally came in the 67th minute. Mahlasela finishing with aplomb past Stephens, following a defence splitting move that tore the hosts apart.

City tried their best to get back into the game, but it was not to be for Benni's troops as Phunya Sele Sele moved level on points with their counterparts on the Absa Premiership standings.

Cape Town City will chase a hat-trick of Absa Premiership wins when they host Bloemfontein Celtic at Athlone Stadium on 17 October 2017, kick-off at 19h30.

City recorded a second straight victory in the league when they beat local rivals Ajax Cape Town 2-0 away on September 30. Goals from Victor Obinna and Judas Moseamedi ensured Benni McCarthy’s side claimed the bragging rights in the ‘Mother City’.

The Citizens have had mixed results at home this season, with two wins and one loss from their three turns as hosts. Their last home match in the league was a 1-0 triumph over Polokwane City in September where Lehlohonolo Majoro scored a late winner from the penalty spot.

Celtic claimed their second win of the season (and a first at home) when they defeated Bidvest Wits 1-0 on October 1. The Bloemfontein side has suffered just one defeat so far this season and are laying the foundation for a solid campaign.

Phunya Sele Sele boast an unbeaten away record, with one win and two draws from their three games on the road this season. Their away victory came at Polokwane City in mid-September and they will be hoping for another three-pointer as soon as possible.

In head-to-head stats, City and Celtic have met in just two previous league matches. Both of those encounters took place last season, with the Cape Town side claiming a 1-0 win in their home game, while the return in Bloemfontein finished in a goalless stalemate.