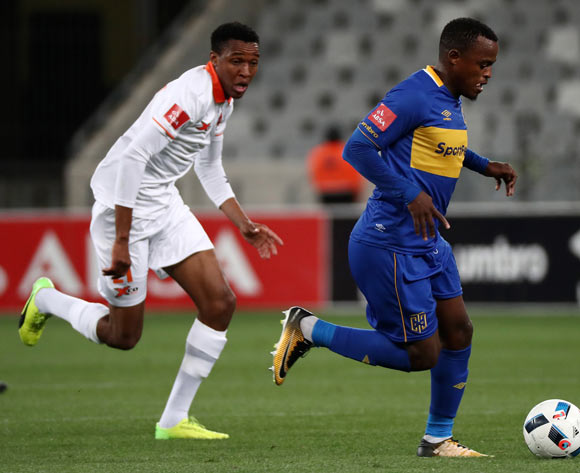 Welcome to the live play-by-play for the ABSA Premiership 2017/18 match between Cape Town City FC and Free State Stars at Cape Town Stadium.

Welcome to the live play-by-play for the ABSA Premiership 2017/18 match between Cape Town City FC and Free State Stars at Cape Town Stadium.

Taariq Fielies scored the only goal of the game as Cape Town City defeated Free State Stars in an Absa Premiership clash at Athlone Stadium on Wednesday.

Having suffered back-to-back league losses against Bloemfontein Celtic and Chippa United, the Citizens were hungry for all three points in this clash.

As for Ea Lla Koto, the defeat brings to an end a strong run of form which had seen them claim 10 points from the last 12 up for grabs.

City put in a dominant showing in the first half, but they found Stars to be resilient and determined opponents. Marshalled by the experience of Paulus Masehe, the Free State side hassled and harried the hosts to a standstill in the first half.

The Cape side also suffered an injury blow near the interval when former West Ham United striker Victor Obinna picked up a knock and had to be replaced by Judas Moseamedi on the 40 minute mark.

Benni McCarthy’s side continued to boss the game through the second half but they struggled to create chances with which to test Stars goalkeeper Badra Ali Sangare.

However, the breakthrough finally arrived in the 89th minute when City put together an attack which ended with Taariq Fielies putting the ball beyond the reach of Stars’ gloves-man.

The teams will return to league action after the international break in November, with City hosting Baroka on November 22, while Stars will be at home to Chippa United on the same day.

Cape Town City look to bounce back from successive losses

Cape Town City will look to bounce back to winning form in the Absa Premiership when they host Free State Stars at Athlone Stadium on 1 November 2017, kick-off at 19h30.

City have suffered two straight losses in the top flight league, going down 1-0 at home to Bloemfontein Celtic and 2-1 away to Chippa United in the space of five days in October. Coach Benni McCarthy saw his team react strongly to a similar situation back in September and will hope for a repeat as they head into a new month.

The Citizens have recorded mixed results at home this season, with two wins and two losses from four turns as hosts. Their last win at home was against Polokwane City back in September, and they will be searching for another three points in this clash.

Stars come into the match having drawn 1-1 at home to bottom-of-the-log Platinum Stars on October 21. Nonetheless, the Free State side has claimed an impressive 10 points from the last 12 up for grabs and have been one of the league’s form teams.

Ea Lla Koto have been hit and miss away from home, recording two wins and two defeats from four matches on the road. However, those two victories were recorded against Polokwane City and Maritzburg United in September and Stars are actually looking for a hat-trick of away wins.

In head-to-head stats, City and Stars have met in just two previous top flight league matches. Both of those encounters took place last season, with Ea Lla Koto winning 1-0 at home in the first half of the campaign, while the return game finished 1-0 in favour of the Citizens.